Isolation and Enumeration of CTC in Colorectal Cancer Patients: Introduction of a Novel Cell Imaging Approach and Comparison to Cellular and Molecular Detection Techniques

Oral cancer has a high mortality rate [1,2], particularly at advanced stages, such as stage III and IV [3]. Early detection and early treatment for oral cancer are important for control [1,2]. Around 95% of oral cancers are oral squamous cell carcinomas (OSCCs) in histopathology [3]. In the oral cavity, ocular inspection and palpation are easily performed. Therefore, The World Health Organization (WHO) has proposed oral cancer screening mainly based on ocular inspection and palpation as a conventional oral examination (COE) to be performed by general dental practitioners (GPs) [4]. Ocular inspection is especially important for oral cancer screening. However, since various oral mucosal diseases occur in the oral cavity, it is often difficult to discriminate between them. In particular, OSCC may develop from oral potentially malignant disorders (OPMDs), such as oral lichen planus (OLP), leukoplakia, erythroplakia, and chronic candida [5]. Early detection and management of oral epithelial dysplasia (OED) in OPMDs is an important preventative step against malignant transformation, such as OSCC [5,6]. It is important to detect these subtle changes at an early stage.
In ocular inspection and palpation, one major limitation is the difficulty of differentiating between benign and high-risk lesions (HRL) [7], as early-stage OSCC (T1-2N0M0) cancer in situ (CIS) [5,8], and OED, may not present typical features, and a wide variety of oral mucosal diseases can present in various ways in the oral cavity [9].
Biopsy is the gold standard for definitive diagnosis. The final diagnosis is performed by pathological examination. However, this process is difficult for GPs to perform and invasive. To improve the safety and effectiveness of oral cancer screening [10], the procedure should be non-invasive or mildly invasive, simple, and repeatable. Forms of oral cancer screening include cytology [11], vital staining [12], and fluorescence visualization (FV) [13] in addition to COE.
FV has some advantages. FV is non-invasive, simple, convenient, real-time, and repeatable using optical instruments (OIs) [14]. FV uses blue light (400–460 nm) to illuminate flavin adenine dinucleotide (FAD), nicotinamide adenine dinucleotide (NADH), and collagen cross-links (CCL) [15,16,17]. The normal mucosa is visualized as apple-green autofluorescence through a selective filter with these coenzymes, and CCL. This is called fluorescence visualization retention (FVR). On the other hand, the abnormal tissues, such as HRL and inflammatory diseases, exhibit decreased autofluorescence and appear as dark brown. The appearance of this color is called FV loss (FVL) [18]. FVL is caused by the absorption of a specific wavelength of blue light due to the decreases in FAD and NADH, breakdown of CCL, and angiogenesis. However, the evaluation of FV has been visual and subjective. Therefore, definitive results have been lacking [13,14].
The purpose of this study was to clarify the utility of subjective and objective evaluations using FV for oral cancer screening. Furthermore, the study aimed to improve the accuracy rate by combining them.

The characteristics of each condition are showed in Table 1. The percentage of man patients with oral cancers, OPMDs, and Others was 53.4%, 57.0%, and 52.8%. The mean age was 62.5, 62.1, and 59.9 years. The tongue was the most commonly affected site for each condition. On the control site, the subjective and objective evaluation showed no significant difference (Table 1).

Following histopathological diagnosis, for OLP, chronic inflammation was observed 121 (98.4%) patients and OED in 2 (1.6%; 1 low grade and 1 high grade). Regarding leukoplakia, hyperkeratosis, OED, and papillary hyperplasia were seen in 61 (59.8%), 31 (30.4%; 16 low grade and 15 high grade), and 10 patients (9.8%), respectively. As for erythroplakia, high-grade OED was seen in all patients. Chronic candida, Candida albicans was also detected in all patients.
Typical cases of OLP and leukoplakia are shown in Figure 2 and Figure 3. OLP shows FV acceleration (FVA) in lace-like leukoderma and clear margin uniform FVL in erythema. Leukoplakia shows clear margin FVA in leukoderma. Most cases exhibited FVA and no FVL. Unclear FVL boundaries were observed for OED.
In the subjective evaluation, the FVL rate was 61.7%. For the objective evaluation, the area was 160,045 pixels, MeanV was 72.1, MediV was 69.8, SD was 9.5, CV was 0.14, skewness was 0.28, kurtosis was 3.3, and VRatio was 93.8%.

Following histopathological diagnosis, catarrhal stomatitis and viral stomatitis were seen in 22 (68.7%) and 10 patients (31.3%) with stomatitis. Patients with stomatitis did not include those with symptomatic disease, such as pemphigus, pemphigoid, or Behçet’s disease. A benign tumor, fibroma and papilloma, lipoma, granular cell tumor, and solitary fibrous tumor were seen in 15 (62.5%), 5 (20.8%), 2 (8.3%), 1 (4.2%), and 1 (4.2%) of the patients.
Typical cases of stomatitis and benign tumor are shown in Figure 4 and Figure 5. Stomatitis shows uniform FVL around the central ulcer. In the surface plot, a clear boundary in the center and uniform FVA and a uniform FVL in the periphery are observed. The benign tumor showed FVR alone and no FVL.
In the subjective evaluation, FVL rate was 32.1%. In the objective evaluation, the area was 129,048 pixels, MeanV was 68.7, MediV was 68.0, SD was 10.1, CV was 0.15, skewness was 0.36, kurtosis was 6.3, and VRatio was 95.8%.

2.3.1. Comparison between Each Group

2.3.3. Combination of Each Factor for Detection of Oral Cancer

Each item was combined for subjective evaluation, and CV and VRatio were evaluated. Each OR was scored by the following calculation formula.
Combination for detection of oral cancer = 13.9 × Subjective evaluation + 5.5 × CV + 5.6 × VRatio
(minimum score 0, maximum score 25)
Using ROC curve analysis, the combination for the detection of oral cancer was set; the AUC was 0.891, and the cut-off was set at 19.4. Sensitivity and specificity were 86.6% and 84.6% (Figure S2).

A total of 502 patients were enrolled at Tokyo Dental College Chiba Hospital and Chiba Dental Center from January 2014 to December 2019. The final diagnosis was performed by pathological examination. The inclusion criteria were: (1) COE and FV were performed before treatment, (2) informed consent to participate in this study was provided, and (3) confirmed diagnosis was obtained by biopsy, except for stomatitis and normal mucosa. All patients with OSCC were re-staged using the 8th edition of the TNM staging system by the UICC [5,8]. The study was approved by the Ethics Review Committee of Tokyo Dental College (740) and performed in accordance with the requirements of the Declaration of Helsinki (64th WMA General Assembly, Fortaleza, Brazil, October 2013).
OIs randomly used in this study were ORALOOK® and IllumiScan®. This was left to the attending physician. These OIs allowed FV images to be obtained and saved to the camera as digital data. FV images of the lesion can be observed in real-time because the OIs have their monitor. FV images were taken a room that was as dark as possible. The irradiating light was set perpendicular to the lesion and the irradiation range was set to about 10 cm [15,16,17].
In subjective evaluations, oral conditions and FV images were compared to evaluate FVR, FVA or FVL in lesions (Figure 7A,B) [57,58]. Image processing analysis was performed on the FV images using Image J software version 1.5 (National Institutes of Health, Bethesda, Maryland, USA) [59,60]. Regions of interest (ROIs) for the lesion and control area were established in FV images [15,16,17].
The ROI of the lesion was defined as the area of FVL. The control ROI was set at a distance away in the same sub-site of the oral cavity in normal mucosa in front of the lesion without FVL and oral mucosal lesions (Figure 7C). The state of the lesion ROI was expressed in the surface plot, and color mapping was performed for the lesion ROI (Figure 7D). In subjective evaluation, we defined a positive case as FVL and a negative case as only FVA or FVR by two or more screenings using the surface plot as a reference [15,16,17]. The FVL rate was calculated. Sensitivity and specificity were calculated as follows; [sensitivity = (FVL positive cases of oral cancers/all cases of oral cancers) × 100%], [specificity = (FVL negative cases without oral cancers/all cases without oral cancers) × 100%].
For differential diagnosis of oral mucosal diseases, the chi-squared test, Mann–Whitney U test, and Fisher’s exact test were used for statistical analyses. Cut-off values were set using an ROC curve to detect oral cancers and OPMDs. AUC, sensitivity, and specificity were calculated by ROC analysis. All statistical analyses were performed using SPSS version 27.0 (IBM, Tokyo, Japan). Values of p < 0.05 were deemed statistically significant. For the multivariate analysis, the factors that were significant in the univariate analysis were used. OR and 95% CI were calculated. During the combination of each factor for the detection of oral cancers, significant factors were extracted from the results of multivariate analysis. Each factor was weighted with reference to the OR, and the effectiveness of the combination was verified.

This work was supported by Shofu Inc (Kyoto, Japan) and HITS PLAN Inc (Tokyo, Japan). The sponsors lent the IllumiScan@ and ORALOOK@ to our department for this study. The funding source had no involvement with regard to study design, collection, analysis, and interpretation of data, writing of the report, or regarding the decision to submit the article for publication.

All authors declare a conflict of interest. A part of this study was funded by Shofu inc (Kyoto, Japan). T.M. and T.S. received a Lecture fee from HITS PLAN Inc (Tokyo, Japan). The funding source had no involvement with regard to study design, collection, analysis, and interpretation of data, writing of the report, or regarding the decision to submit the article for publication. 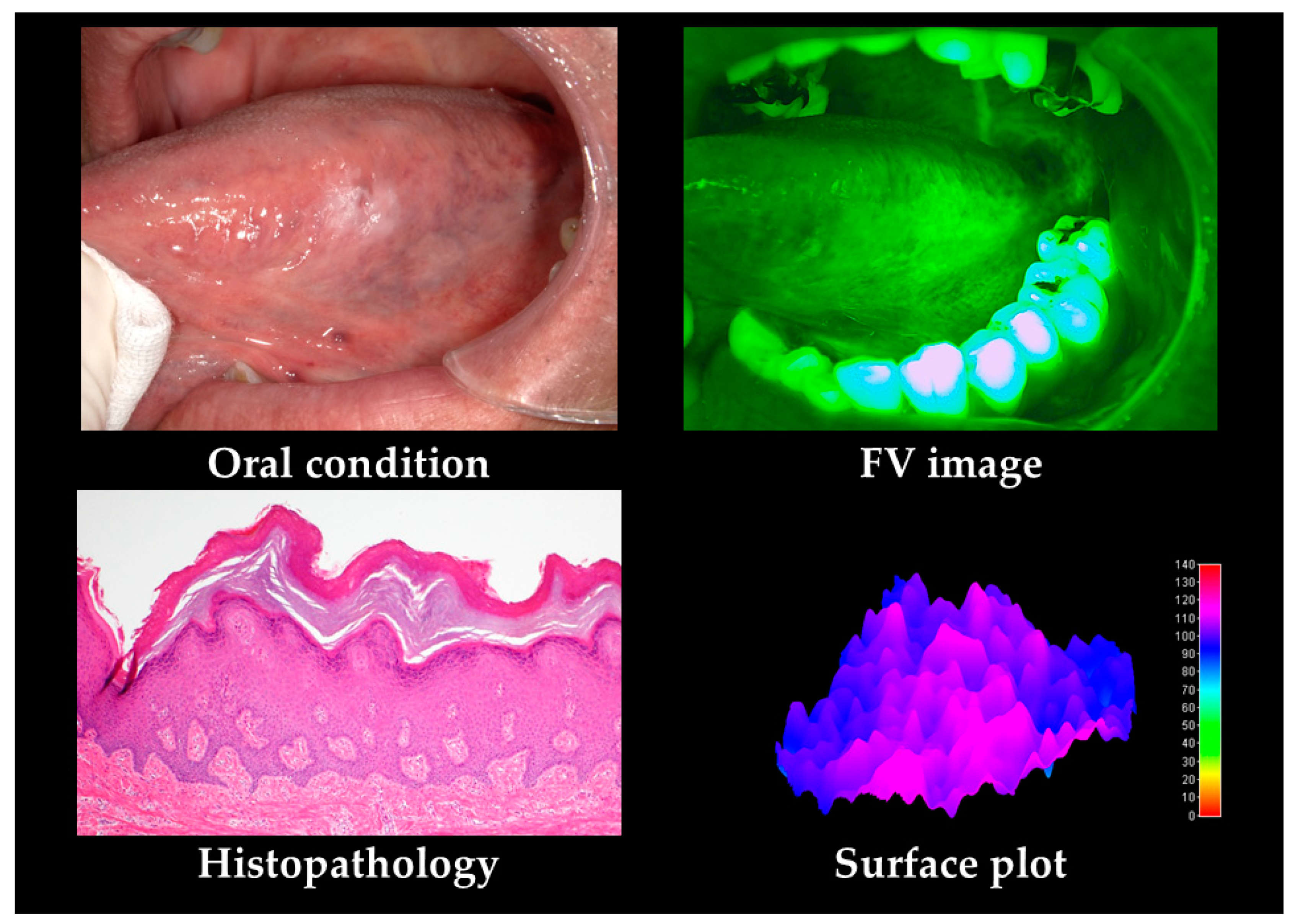 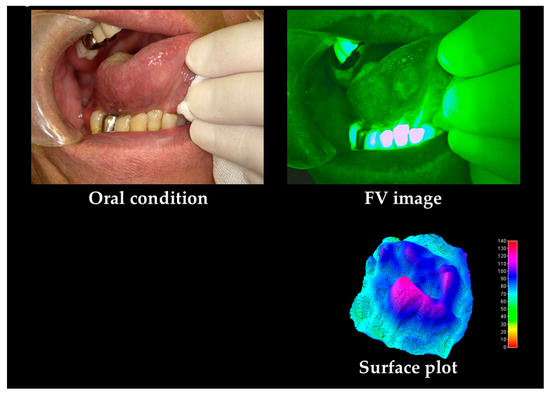 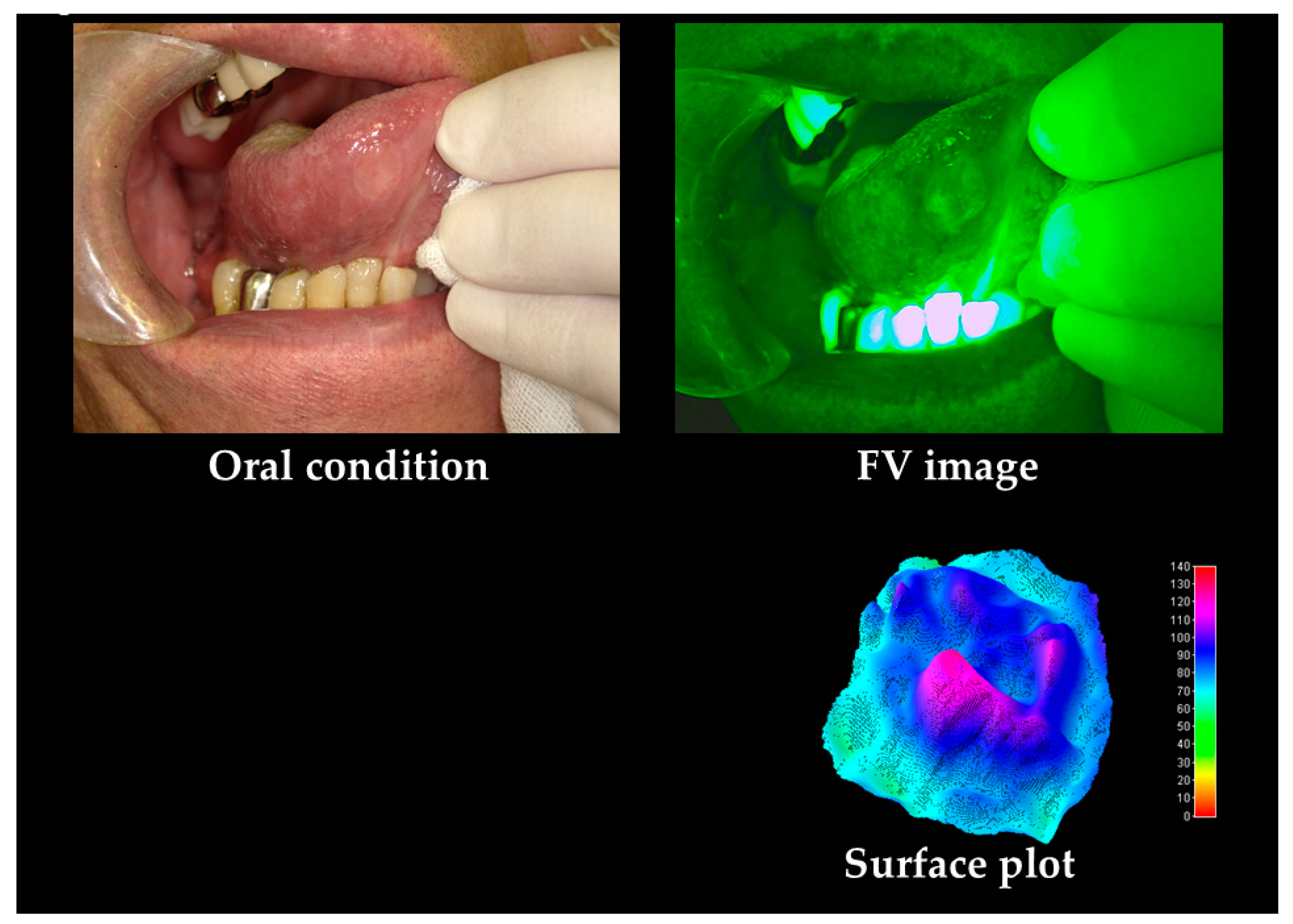 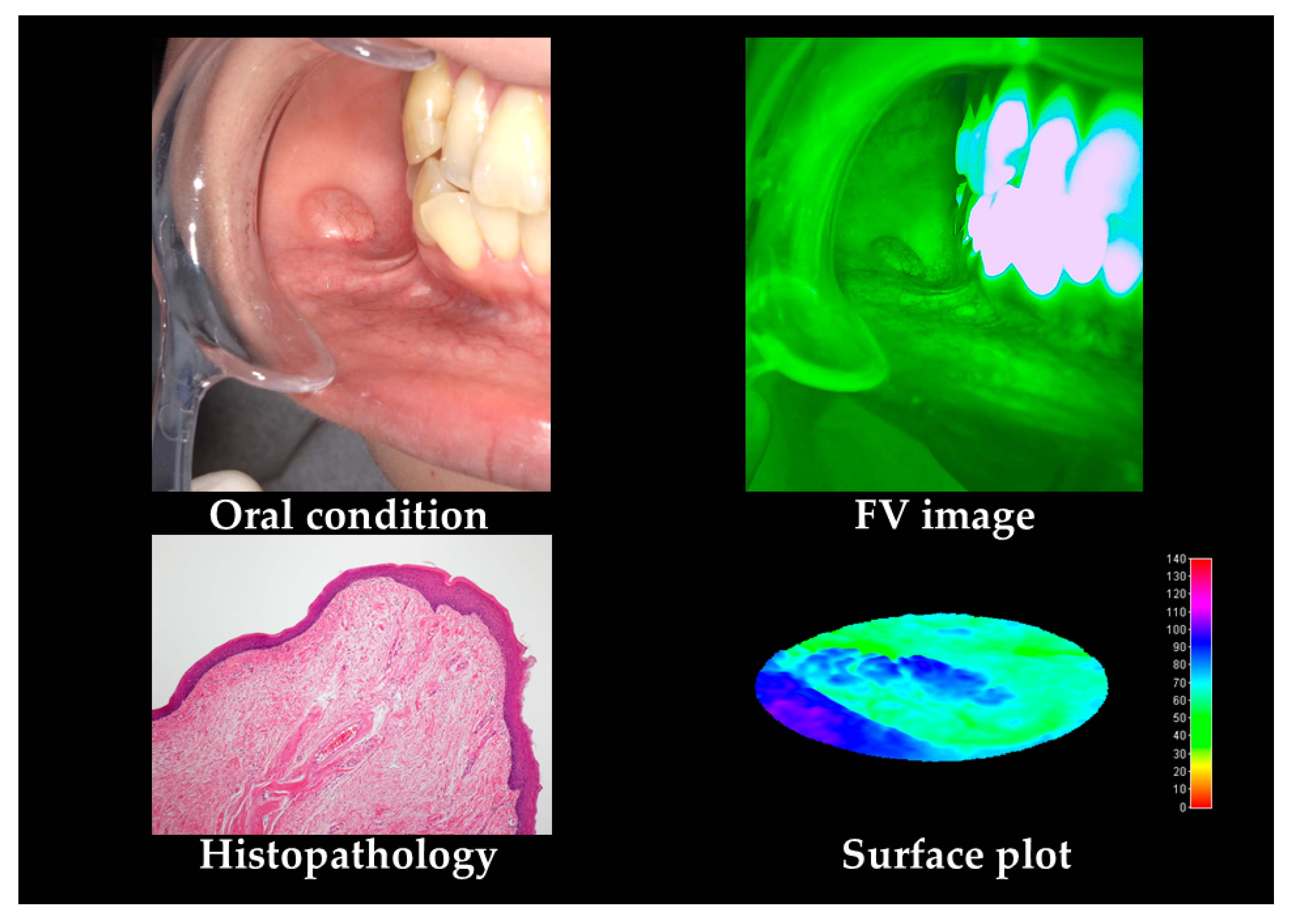 Table 5. Multivariate analysis for detection OPMDs.
Table 5. Multivariate analysis for detection OPMDs.
© 2020 by the authors. Licensee MDPI, Basel, Switzerland. This article is an open access article distributed under the terms and conditions of the Creative Commons Attribution (CC BY) license (http://creativecommons.org/licenses/by/4.0/).
We use cookies on our website to ensure you get the best experience. Read more about our cookies here.
Accept
We have just recently launched a new version of our website. Help us to further improve by taking part in this short 5 minute survey here. here.
Never show this again