Autophagy in the Immunosuppressive Perivascular Microenvironment of Glioblastoma

The EGFR-TMEM167A-p53 Axis Defines the Aggressiveness of Gliomas

Despite the high frequency of EGFR and TP53 genetic alterations in gliomas, little is known about their crosstalk during tumor progression. Here, we described a mutually exclusive distribution between mutations in these two genes. We found that wild-type p53 gliomas are more aggressive than their mutant counterparts, probably because the former accumulate amplifications and/or mutations in EGFR and show a stronger activation of this receptor. In addition, we identified a series of genes associated with vesicular trafficking of EGFR in p53 wild-type gliomas. Among these genes, TMEM167A showed the strongest implication in overall survival in this group of tumors. In agreement with this observation, inhibition of TMEM167A expression impaired the subcutaneous and the intracranial growth of wild-type p53 gliomas, regardless of the presence of EGFR mutations. In the absence of p53 mutations, TMEM167A knockdown reduced the acidification of intracellular vesicles, affecting the autophagy process and impairing EGFR trafficking and signaling. This effect was mimicked by an inhibitor of the vacuolar ATPase. We propose that the increased aggressiveness of wild-type p53 gliomas might be due to the increase in growth factor signaling activity, which depends on the regulation of vesicular trafficking by TMEM167A. View Full-Text
Keywords: glioma; wild-type p53; mutant p53; EGFR/AKT signaling; vesicular trafficking; autophagy glioma; wild-type p53; mutant p53; EGFR/AKT signaling; vesicular trafficking; autophagy
►▼ Show Figures 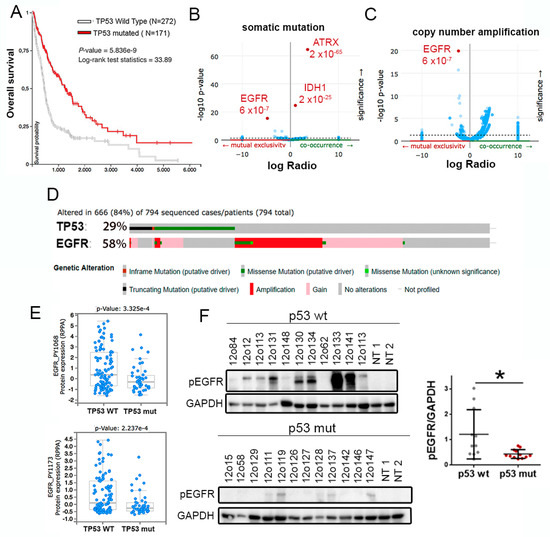