Tumor necrosis factor-related apoptosis-inducing ligand (TRAIL) is a potent inducer of apoptosis that may be a promising agent in cancer therapy due to its selectivity toward tumor cells. However, many cancer cells are resistant to TRAIL due to defects in apoptosis signaling or activation of survival pathways. We hypothesized that a disruption of pro-survival signaling cascades with the multi-tyrosine kinase inhibitor sunitinib would be an effective strategy to enhance TRAIL-mediated apoptosis. Here we demonstrate that sunitinib significantly augments the anticancer activity of TRAIL in models of colon cancer. The therapeutic benefit of the TRAIL/sunitinib combination was associated with increased apoptosis marked by enhanced caspase-3 cleavage and DNA fragmentation. Overexpression of the anti-apoptotic factor B-cell lymphoma 2 (BCL-2) in HCT116 cells reduced TRAIL/sunitinib-mediated apoptosis, further supporting that sunitinib enhances the anticancer activity of TRAIL via augmented apoptosis. Analysis of pro-survival factors identified that the combination of TRAIL and sunitinib significantly downregulated the anti-apoptotic protein X-linked inhibitor of apoptosis protein (XIAP) through a c-Jun N-terminal kinase (JNK)-mediated mechanism. Short hairpin RNA (shRNA)-mediated knockdown of JNK confirmed its key role in the regulation of sensitivity to this combination as cells with suppressed JNK expression exhibited significantly reduced TRAIL/sunitinib-mediated apoptosis. Importantly, the therapeutic benefit of the TRAIL/sunitinib combination was validated in the HCT116-Luc and HCT15 colon cancer xenograft models, which both demonstrated significant anti-tumor activity in response to combination treatment. Collectively, our data demonstrate that sunitinib enhances TRAIL-mediated apoptosis by heightened JNK activation, diminished XIAP levels, and augmented apoptosis. View Full-Text
Keywords: TRAIL; Apoptosis; sunitinib; XIAP; colon cancer TRAIL; Apoptosis; sunitinib; XIAP; colon cancer
►▼ Show Figures 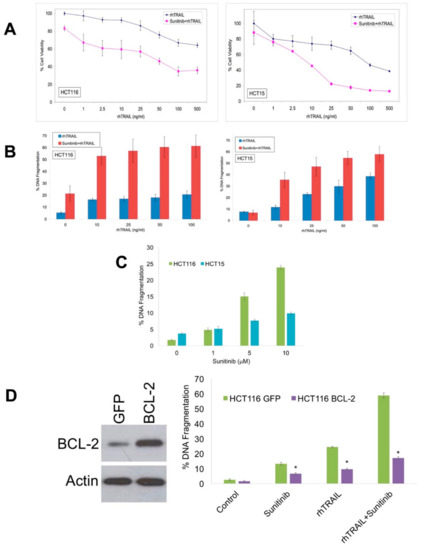