Changes in the regulation of endocannabinoid production, together with an altered expression of their receptors are hallmarks of cancer, including colorectal cancer (CRC). Although several studies have been conducted to understand the biological role of the CB1 receptor in cancer, little is known about its involvement in the metastatic process of CRC. The aim of this study was to investigate the possible link between CB1 receptor expression and the presence of metastasis in patients with CRC, investigating the main signaling pathways elicited downstream of CB1 receptor in colon cancer. Fifty-nine consecutive patients, with histologically proven colorectal cancer, were enrolled in the study, of which 30 patients with synchronous metastasis, at first diagnosis and 29 without metastasis. A low expression of CB1 receptor were detected in primary tumor tissue of CRC patients with metastasis and consequently, we observed an alteration of CB1 receptor downstream signaling. These signaling routes were also altered in intestinal normal mucosa, suggesting that, normal mucosa surrounding the tumor provides a realistic picture of the molecules involved in tissue malignant transformation. These observations contribute to the idea that drugs able to induce CB1 receptor expression can be helpful in order to set new anticancer therapeutic strategies.
Keywords: endocannabinoid system; cannabinoid type 1 (CB1) receptor; colorectal cancer; metastasis endocannabinoid system; cannabinoid type 1 (CB1) receptor; colorectal cancer; metastasis

Cannabinoid receptors and their endogenous ligands, the endocannabinoids, constitute the endocannabinoids system (ECS), known to be important in regulating gastrointestinal motility, secretion, inflammation, and immunity [1]. ECS has been demonstrated to have a role in the regulation of signaling pathways involved in cancer pathogenesis [2,3]. Numerous studies have provided evidence that a deregulation of endocannabinoids production, together with an altered expression of their receptors are hallmarks of cancer [4,5,6]. The role of ECS in the onset of cancer is different and depends on the cancer type and tissue [6]. A high expression of Cannabinoid type 1 (CB1) receptor, but not cannabinoid type 2 (CB2), has been observed in pancreatic cancer [7], whereas an overexpression of both CB1 and CB2 receptors seems to be correlated with an improved prognosis in hepatocellular carcinoma [8]. In colon cancer, CB1 receptor has been detected at low levels and its inhibition has been demonstrated to accelerate intestinal adenoma growth [9]. In particular, CB1 deficient mice exhibited a more severe inflammatory status in the colon tissue, suggesting a protective role of this receptor against colonic tissue inflammation and malignant transformation [9,10]. Previously, we demonstrated a significant reduction in CB1 receptor gene expression levels in cancer tissue compared to normal surrounding mucosa of patients with colorectal cancer (CRC), confirming that the negative modulation of cell proliferation, mediated by CB1 receptor, is lost in cancer [11]. CB1 receptor induction seems to inhibit the proliferation of colon cancer cell lines, affecting cell cycle, in particular reducing the number of cells in the S phase and decreasing the cell polyamines content [12,13].
CB1 receptor gene up-regulation in ApcMin/+ mice fed a diet enriched with omega 3-PUFAs, was correlated with a significant inhibition of intestinal polyps growth mediated by a concurrent inactivation of the Wnt/β-catenin pathway [11].
The growth suppressing effect of CB1 receptor is due to a down-regulation of the epidermal growth factor receptor (EGFR) in prostate cancer cell lines [14] or via the activation of cAMP/protein kinase A pathway in breast cancer cells [15].
Experimental evidence suggests the use of cannabinoids as potential anticancer agents, given their ability to exert antitumoral effects in vitro and in animal models of cancer [11,12,13,14,15,16]. Cannabinoids via their receptors, especially CB1 receptor, can modulate signaling pathways that control cell survival and apoptosis [12,17]. Although several studies have been conducted to understand the biological role of the CB1 receptor in cancer, little is known about its involvement in metastatic process of CRC.
Metastatic CRC has limited treatment options and thus results in higher mortality rates compared to non-metastatic CRC [18]. The cancer cells that are able to survival in circulation, and to migrate and invade another organ, are characterized by the expression of cellular oncogenes or the loss of tumor suppressor gene function [19]. Identifying the cellular mechanisms that regulate metastasis onset may be useful to develop effective anticancer therapies.
It has demonstrated that endogenous ligands of CB1 receptor, as anandamide, are able to regulate several stages of the metastatic process, modulating both cell migration and invasion [20]. Cannabinoids seem also to have a regulatory role in angiogenesis, inhibiting the formation and tumor-induced angiogenesis in a model of endothelial tumor cells [21].
On the basis of these evidences and considering our previous data showing a significant reduction of CB1 receptor gene expression in cancer compared to normal surrounding mucosa from patients with CRC [11], here we hypothesize that CB1 receptor may be associated with disease severity of CRC. Therefore, the aim of the present study was to address a possible link between CB1 receptor expression and the presence of metastasis in patients with CRC. Moreover, we investigated the main signaling pathways at the basis of the action of CB1 receptor in colon cancer.

CRC patients with synchronous metastasis at first diagnosis and those patients developing metastasis during the course of disease account often for most cancer-related deaths, because of limited treatment options [18,19,20,21,24]. Optimal treatment has not yet been defined and the majority of patients with metastatic CRC are still being managed with palliative care.
In light of this issue, understanding the molecular mechanisms and the factors that regulate the formation of metastasis is crucial in developing effective therapies for metastatic cancer.
Among the bioactive molecules playing a role in the regulation of signaling pathways involved in tumor growth and progression, there is the CB1 protein, a G-protein-coupled transmembrane receptor, found not only predominantly in the central nervous system, but also in most peripheral tissues including immune cells and the gastrointestinal tract [25].
Here, we detected a low expression of CB1 receptor in metastatic CRC patients resulting in an alteration of its downstream signaling. CB1 receptor expression levels affect the intracellular levels of MAPK-p38 and ERK protein, downstream pathways dependent from CB1 receptor action. Literature data demonstrate that the antitumor effects of CB1 receptor occur via induction of MAPK pathways, such as MAPK-p38 and ERK1/2, and through the inhibition of the Akt-pathway, which in turn activate proapoptotic and inactivate antiapoptotic proteins [6,9,26,27].
Consistently with this hypothesis, we demonstrate, in metastatic CRC, an up-regulation of p-Akt, and the subsequent inhibition of cancer cell death, confirmed by a low gene and protein expression of Bax and caspase-3.
The direct participation of MAPK pathway in the antitumor action of cannabinoid receptors has been clearly demonstrated in pancreatic and hepatic cancer cells [8,28]. The cannabinoid-evoked apoptosis via CB1 receptor induction is stimulated by cell autophagy, known to be a cytoprotective mechanism leading to cell death [29,30]. It has also been reported that autophagy blockade prevents cannabinoid-induced apoptosis [31].
CB1 receptor expression has already been demonstrated to be correlated with distant metastasis in CRC [32]. However, the mechanisms underlying the transcriptional regulation of the CB1 receptor have not been clearly investigated.
The present study demonstrates that CB1 receptor down-regulation is associated with molecular changes, due to the switching off or on of the downstream pathways linked to this receptor function.
These signaling routes also result altered in intestinal normal mucosa which surrounding neoplasia, suggesting that tumor development and progression are certainly affected by the molecular defects that arise first in normal tissue. Therefore, intestinal normal mucosa from CRC patients provides a realistic picture of the molecules involved in tissue malignant transformation.

Fifty-nine consecutive patients with histologically proven colorectal cancer were recruited by the Surgery Division of our Institute. All patients were invited to provide an informed consent to take part in the study. At surgery, samples of mucosa, taken from macroscopically normal areas of intestine, at 10 cm from the neoplasia and cancer tissue, were obtained for each subject and stored at −80 °C until assayed.
The study was conducted in accordance with the Helsinki Declaration and approved by the Ethical Committee of IRCCS “S. de Bellis”, Castellana Grotte (Bari, Italy, number code: 32/CE/DE BELLIS, 27 October 2016).

Data description was performed by using means ± SD. Then, data were analyzed using ANOVA with Dunnett’s and Tukey’s multiple comparison test, where appropriate. A p value ≤ 0.05 was considered as statistically significant.

Our data demonstrate that low expression of CB1 receptor in CRC positively affects the metastatic process, inhibiting apoptosis and deregulating the main signaling pathways at the basis of the receptor action. These observations contribute to the idea that drugs directed at regulating the endocannabinoid system through the induction of CB1 receptor, can be helpful in order to develop new anti-cancer therapies or improve existing ones.

The following are available online at https://www.mdpi.com/2072-6694/11/5/708/s1, Figure S1: All Western blot figures include a dot plots graph showing the densitometry values of each sample (band) normalized to β-actin value. 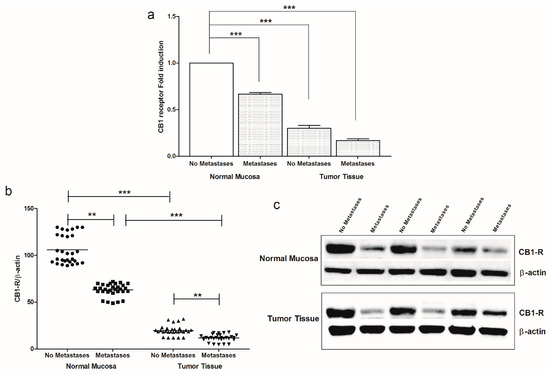 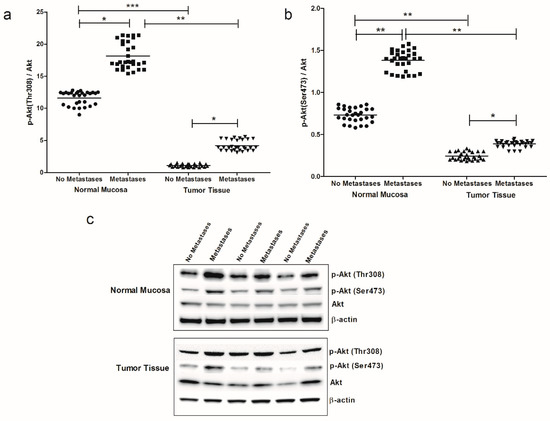 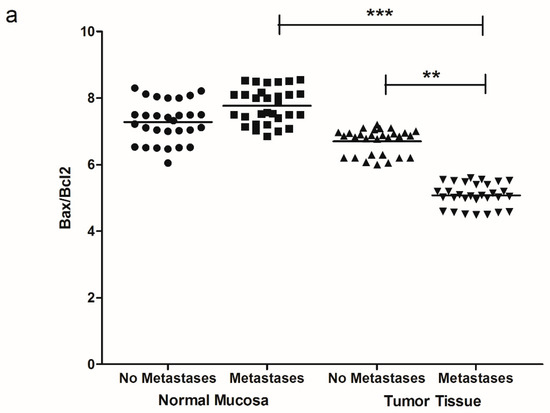 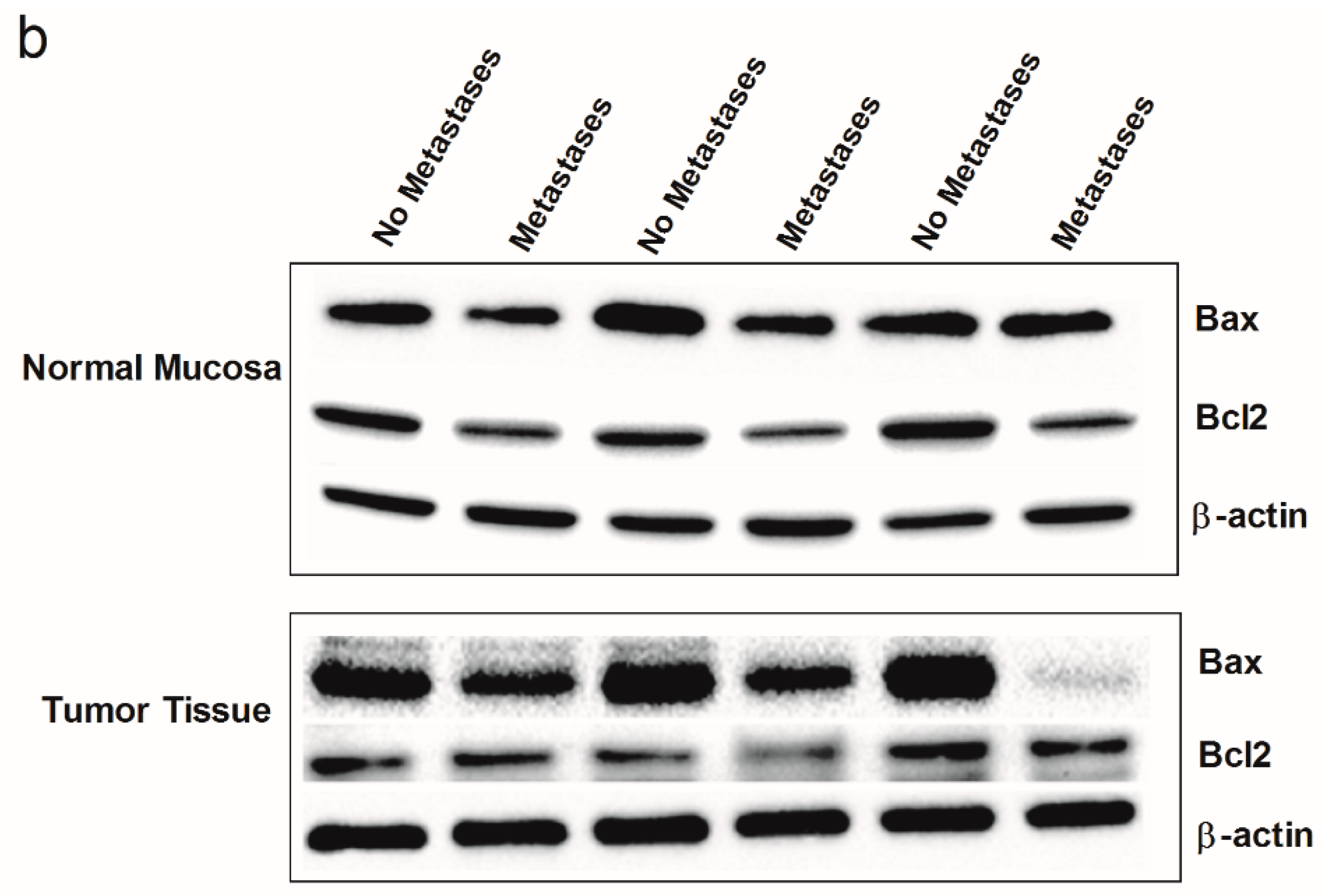 Table 2. Sequences of primers for gene expression analysis.
Table 2. Sequences of primers for gene expression analysis.
© 2019 by the authors. Licensee MDPI, Basel, Switzerland. This article is an open access article distributed under the terms and conditions of the Creative Commons Attribution (CC BY) license (http://creativecommons.org/licenses/by/4.0/).
We use cookies on our website to ensure you get the best experience. Read more about our cookies here.
Accept
We have just recently launched a new version of our website. Help us to further improve by taking part in this short 5 minute survey here. here.
Never show this again