Effect of Perioperative Lidocaine, Propofol and Steroids on Pulmonary Metastasis in a Murine Model of Breast Cancer Surgery
Next Article in Special Issue

Colorectal carcinogenesis is a complex process in which many immune and non-immune cells and a huge number of mediators are involved. Among these latter factors, Smad7, an inhibitor of the transforming growth factor (TGF)-β1 signaling that has been involved in the amplification of the inflammatory process sustaining chronic intestinal inflammation, is supposed to make a valid contribution to the growth and survival of colorectal cancer (CRC) cells. Smad7 is over-expressed by tumoral cells in both sporadic CRC and colitis-associated CRC, where it sustains neoplastic processes through activation of either TGFβ-dependent or non-dependent pathways. Consistently, genome-wide association studies have identified single nucleotide polymorphisms of the Smad7 gene associated with CRC and shown that either amplification or deletion of the Smad7 gene associates with a poor prognosis or better outcome, respectively. On the other hand, there is evidence that over-expression of Smad7 in immune cells infiltrating the inflamed gut of patients with inflammatory bowel disease can elicit anti-tumor responses, with the down-stream effect of attenuating CRC cell growth. Taken together, these observations suggest a double role of Smad7 in colorectal carcinogenesis, which probably depends on the cell subset and the biological context analyzed. In this review, we summarize the available evidences about the role of Smad7 in both sporadic and colitis-associated CRC. View Full-Text
Keywords: TGF-β1 signaling; antisense oligonucleotides; colorectal cancer; colon cancer; colitis-associated cancer TGF-β1 signaling; antisense oligonucleotides; colorectal cancer; colon cancer; colitis-associated cancer
►▼ Show Figures 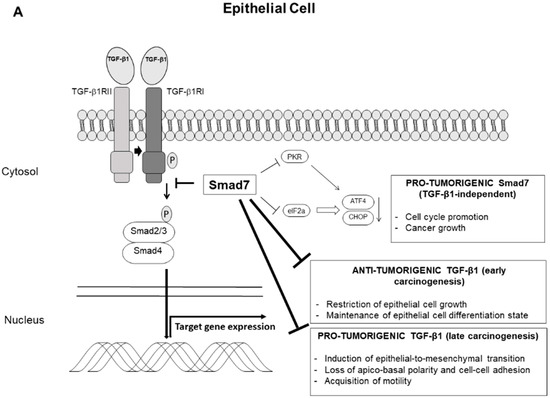