Hypoxia is a major characteristic of the solid tumor microenvironment. To understand how chimeric antigen receptor-T cells (CAR-T cells) function in hypoxic conditions, we characterized CD19-specific and BCMA-specific human CAR-T cells generated in atmospheric (18% oxygen) and hypoxic (1% oxygen) culture for expansion, differentiation status, and CD4:CD8 ratio. CAR-T cells expanded to a much lower extent in 1% oxygen than in 18% oxygen. Hypoxic CAR-T cells also had a less differentiated phenotype and a higher CD4:CD8 ratio than atmospheric CAR-T cells. CAR-T cells were then added to antigen-positive and antigen-negative tumor cell lines at the same or lower oxygen level and characterized for cytotoxicity, cytokine and granzyme B secretion, and PD-1 upregulation. Atmospheric and hypoxic CAR-T cells exhibited comparable cytolytic activity and PD-1 upregulation; however, cytokine production and granzyme B release were greatly decreased in 1% oxygen, even when the CAR-T cells were generated in atmospheric culture. Together, these data show that at solid tumor oxygen levels, CAR-T cells are impaired in expansion, differentiation and cytokine production. These effects may contribute to the inability of CAR-T cells to eradicate solid tumors seen in many patients. View Full-Text
Keywords: CAR-T; hypoxia; tumor; microenvironment; CD19; BCMA; immunotherapy CAR-T; hypoxia; tumor; microenvironment; CD19; BCMA; immunotherapy
►▼ Show Figures 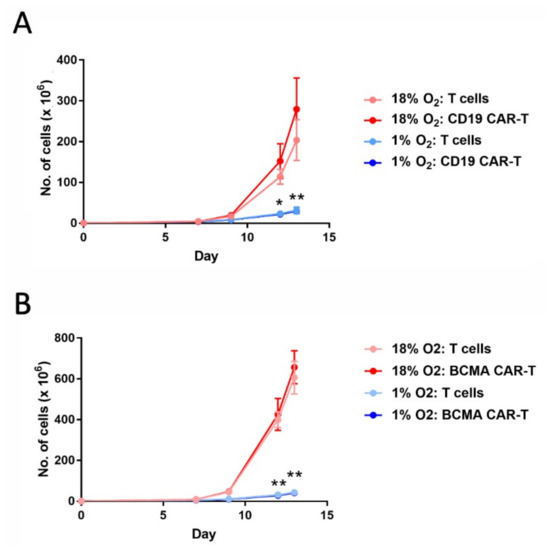