The role of myeloid cell-specific TGF-β signaling in non-small-cell lung cancer (NSCLC)-induced osteolytic bone lesion development is unknown. We used a genetically engineered mouse model, Tgfbr2LysMCre knockout (KO), which has a loss of TGF-β signaling specifically in myeloid lineage cells, and we found that the area of H1993 cell-induced osteolytic bone lesions was decreased in Tgfbr2LysMCre KO mice, relative to the area in control littermates. The bone lesion areas were correlated with tumor cell proliferation, angiogenesis, and osteoclastogenesis in the microenvironment. The smaller bone lesion area was partially rescued by bFGF, which was expressed by osteoblasts. Interestingly, bFGF was able to rescue the osteoclastogenesis, but not the tumor cell proliferation or angiogenesis. We then focused on identifying osteoclast factors that regulate bFGF expression in osteoblasts. We found that the expression and secretion of CTHRC1 was downregulated in osteoclasts from Tgfbr2LysMCre KO mice; CTHRC1 was able to promote bFGF expression in osteoblasts, possibly through the Wnt/β-catenin pathway. Functionally, bFGF stimulated osteoclastogenesis and inhibited osteoblastogenesis, but had no effect on H1993 cell proliferation. On the other hand, CTHRC1 promoted osteoblastogenesis and H1993 cell proliferation. Together, our data show that myeloid-specific TGF-β signaling promoted osteolytic bone lesion development and bFGF expression in osteoblasts; that osteoclast-secreted CTHRC1 stimulated bFGF expression in osteoblasts in a paracrine manner; and that CTHRC1 and bFGF had different cell-specific functions that contributed to bone lesion development. View Full-Text
Keywords: TGF-β signaling; TGFBR2; bFGF; CTHRC1; Wnt/β-catenin; NSCLC bone metastasis; myeloid lineage cells; osteoclasts; osteoblasts TGF-β signaling; TGFBR2; bFGF; CTHRC1; Wnt/β-catenin; NSCLC bone metastasis; myeloid lineage cells; osteoclasts; osteoblasts
►▼ Show Figures 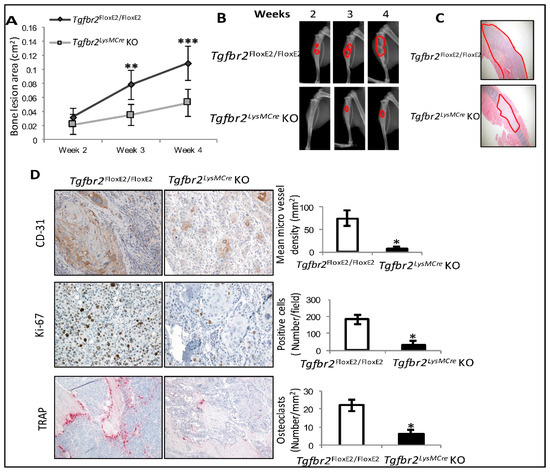