Colloidal quantum dots (QDs) with properties that can be tuned by size, shape, and composition are promising for the next generation of photonic and electronic devices. However, utilization of these materials in such devices is hindered by the limited compatibility of established semiconductor processing techniques. In this context, patterning of QD films formed from colloidal solutions is a critical challenge and alternative methods are currently being developed for the broader adoption of colloidal QDs in functional devices. Here, we present a solvent-free approach to patterning QD films by utilizing a shape memory polymer (SMP). The high pull-off force of the SMP below glass transition temperature (Tg) in conjunction with the conformal contact at elevated temperatures (above Tg) enables large-area, rate-independent, fine patterning while preserving desired properties of QDs.
Keywords: colloidal quantum dots; shape memory polymer; patterning colloidal quantum dots; shape memory polymer; patterning

The variable size, shape, and composition of colloidal semiconductor quantum dots (QDs) permit convenient tailoring of electrical and optical properties [1,2,3,4]. In addition, solubility of colloidal QDs in a variety of solvents can be beneficial to low-cost, large-area manufacturing compared to conventional micro-manufacturing [5]. In particular, the use of solution-based fabrication techniques [6,7,8] has attracted much attention for next-generation devices from colloidal QDs in the fields of light-emitting diodes (LEDs) [9,10,11], solar cells [12,13,14,15], and thin film transistors (TFTs) [8,16]. While solubility allows for convenient spin-casting of thin films of QDs, further processing of the deposited films is limited due to solvent stripping/damage that can easily occur, which then hinders the broader adoption of QDs for such photonic and electronic devices. In this context, direct patterning of QD through both additive and subtractive means has been studied. Additive patterning schemes such as dip-pen and polymer pen nanolithography have successfully demonstrated patterning of a single QD resolution [17,18,19]. On the other hand, subtractive patterning of QD films through transfer printing-based mechanical peeling using elastomeric stamps has been investigated and high-quality transferred films have recently been demonstrated [20,21,22,23].
Transfer printing with a structured polydimethylsiloxane (PDMS) elastomeric stamp requires certain thresholds with respect to the applied preload when the PDMS stamp is making a contact with a QD film and with respect to separation rate, i.e., peeling rate, for proper patterning [20,21]. This method suffers from inconsistent patterning due to weak adhesion between the QDs, high preload, a high peeling rate, and poor resolution. Introducing water-soluble polyvinyl alcohol (PVA) can enhance transfer of QD films to PDMS stamps and improve patterning yields, but the process still suffers from high preload, high peeling rate, and moderate resolution [22]. Recently introduced intaglio transfer printing has successfully demonstrated ultra high resolution, but the drawback of the high preload and high peeling rate (10 cm/s) still remains [23].
We propose an alternative method of patterning QD films that utilizes the shape memory effect of shape memory polymers (SMPs) to alleviate such high preload and high peeling rate requirements without compromising high pattern resolution. SMPs are a class of thermosensitive materials that change their mechanical compliance across the polymer’s glass transition or melting temperature (Tg, or Tm) [24,25]. The reversibility in the elastic modulus can be exploited to provide conformal contact and high pull-off force, useful for transfer printing and patterning [26]. Here, a structured SMP surface is used to make conformal contact to QD films with low preload at elevated temperature and to provide high pull-off forces enabling high-resolution large-area patterning, even with a low separation rate (~2 µm/s) at room temperature. In such a way, solvent-free, rate-independent, high yield, highly scalable QD film patterning is achieved via the SMP surface.

CdSe/CdS core/shell QDs were synthesized by an established method with slight modifications [27]. Briefly, 1 mmol of CdO, 4 mmol of oleic acid (OA), and 20 mL of 1-octadecene (ODE) were degassed at 100 °C for 1 h before being heated up to 300 °C to form clear Cd(OA)2 precursors. Then 0.25 mL of 1 M Se in trioctylphosphine was swiftly injected into the reaction mixture. After 90 s of growth, 0.75 mmol of 1-octanethiol in 2 mL of ODE was injected dropwise. The reaction was terminated by cooling with an air jet after another 30 min of growth. The final reaction mixture was purified twice by adding 1 part toluene and 2 parts ethanol and centrifuging at 2000 rpm.

The preparation of octadecyltrichlorosilane (ODTS)-coated Si substrates followed an established method [21] with slight modifications. Silicon substrates were cleaned by acetone/isopropanol and dried with N2 flow, and then cleaned using UV/O3 for 30 min. After UV/O3 exposure, the Si substrates were immediately transferred to ODTS in anhydrous hexane solution (1:600 volume ratio) and left to self-assemble for 1 h. The resulting substrates were sonicated in chloroform to remove excess ODTS molecules and then baked on a hot plate at 120 °C for 20 min. Once the ODTS-coated Si substrate was prepared, a solution of QDs in octane (~60 mg/mL) was spin-casted onto the substrate at 2000 rpm for 30 s. The schematics and an optical image of the prepared substrate are included in Figure 1a.

For the fabrication of SMP stamps, a SU-8 (SU-8 50, MicroChem, Westborough, MA, USA) mold was first made. A Si wafer was thoroughly degreased with acetone and isopropyl alcohol. Then, the Si wafer was treated with oxygen plasma for further cleaning. SU-8 was then spin-coated to form a 50 µm thin layer on the Si wafer. After a soft baking process on a hotplate at 65 °C for 6 min and at 95 °C for 20 min, the SU-8 layer was patterned through UV exposure with a pre-designed FeO2 mask. Post exposure baking on a hotplate at 65 °C for 1 min and 95 °C for 5 min and developing with SU-8 developer resulted in a 50-µm-thick SU-8 mold. For the double molding process, a SU-8 mold on a Si wafer was coated with trichloro-1H,1H,2H,2H-perfluorodecylsilane (FDTS) through molecular vapor deposition (MVD) to form an anti-stick monolayer. After fully mixing and degassing, a PDMS precursor was carefully poured into a SU-8 mold and cured in a convection oven at 60 °C for 120 min. The PDMS mold was then used for the successive SMP molding process. A previously developed SMP, NGDE2 with Tg of ~40 °C [28], was used in this work. A mixed SMP precursor was poured into the PDMS mold and cured between the mold and a glass slide in a convection oven at 100 °C for 90 min. Final demolding of the SMP from the PDMS mold leads to a SMP stamp 50 µm in thickness on the glass slide as shown in Figure 1b.

The photoluminescence (PL) spectra of QDs were collected with a Horiba Jobin Yvon FluoroMax-3 spectrofluorometer (Horiba, Ltd., Kyoto, Japan). The scanning electron microscope (SEM) images were obtained on Hitachi S4800 SEM (Hitachi, Ltd., Tokyo, Japan). The thickness of the QD film was measured to be 47 nm using a J. A. Woollam VASE Ellipsometer (J. A. Woollam Co., Inc., Lincoln, NE, USA) in the wavelength range of 400–900 nm at an incidence angle of 60°. Data analysis was performed with WVASE32 software (J. A. Woollam Co., Inc.) using the Cauchy model. PL imaging was carried out on a Jobin Yvon Labram HR800 confocal Raman spectrometer (Horiba, Ltd.) using a 10× air objective with 532 nm laser excitation source. The laser intensity was kept below 0.5 mW to prevent damage to the QD films.

High magnification SEM images were obtained to characterize the morphology of the patterned QD films. Figure 3a shows a very well-defined edge of the QD pattern using the hot contact and cold separation condition, which corresponds to Figure 2c. Further magnified SEM image of the QD film is shown in Figure 3b. Individual QDs can be seen and are uniformly distributed and densely packed in the film. Additionally, spatially resolved photoluminescence (PL) spectra is obtained to examine the possible effects of the SMP stamp-based patterning process on the optical properties of the QDs. As demonstrated in Figure 3c, the PL intensity mapping matches the SEM image and shows a distinctively different spectrum between the QD pattern and the background. Figure 3d reveals that the PL from the dark regions where QDs have been removed by the SMP stamp is 4 orders of magnitude lower in peak intensity than that from the QD patterns remaining. Furthermore, the PL line shape and peak position are well preserved when compared with those of QDs in solution.

The QD patterning achieved here through the SMP stamp is a two-dimensional planar process that can be developed into a large-scale patterning method. In order to demonstrate the feasibility of large scale patterning, an array of 200 µm by 200 µm square SMP stamps is prepared as shown in Figure 4a. The prepared SMP stamp array is brought into contact with a QD substrate at a temperature above Tg and subsequently cooled below Tg prior to separation as described in methods. The resulting pattern is shown in Figure 4b. As can be seen in the optical and SEM images, an array of QD patterns covering 1.2 cm × 1.2 cm area can be formed in a simple single patterning step with a low peeling rate using the SMP stamp array.

This work demonstrates a novel method of patterning QD films under solvent-free, dry conditions. While existing PDMS-based transfer printing approaches can lead to successful QD film patterning, those methods require high peeling rates to induce sufficient pull-off forces. In this context, utilizing the shape memory effect of a SMP that switches its elastic modulus as a function of temperature provides advantages while maintaining desirable solvent-free conditions for patterning QD films. Sufficiently large pull-off forces by the SMP at below Tg in conjunction with highly conformal contact of the SMP stamp at elevated temperature (above Tg) enable dry patterning of QD films, even at an extremely slow separation rate (2 µm/s), which verifies the rate-independent patterning yield of the SMP stamp. Arrays of QD patterns formed through this method as demonstrated here can facilitate various device applications, such as solar cells, LEDs, and transistors, thereby broadening the applicability of QDs.

This work was supported by the National Science Foundation under Grant CMMI-1435521. Experiments were carried out in part in the Frederick Seitz Materials Research Laboratory Central Facilities, University of Illinois. 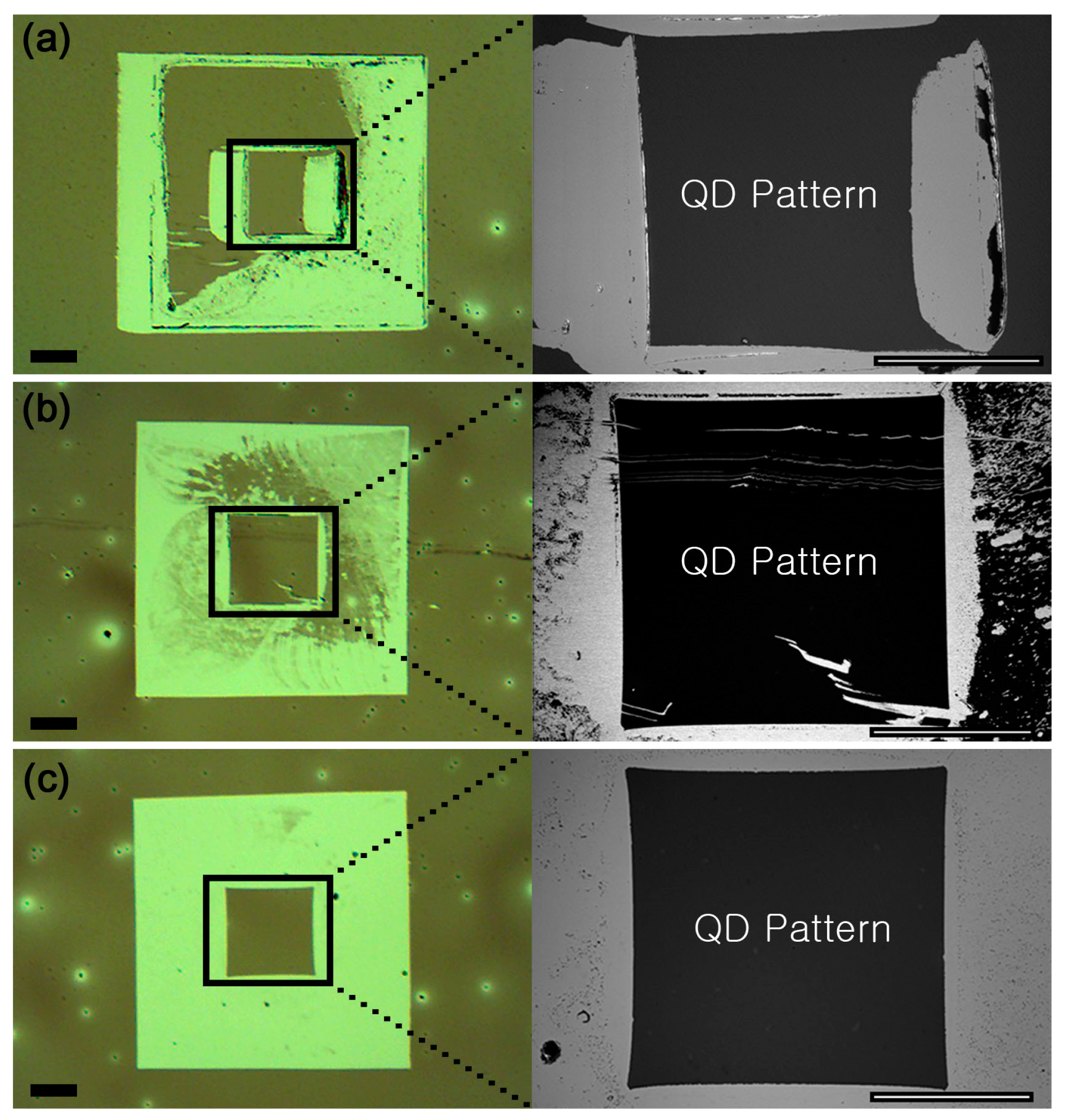 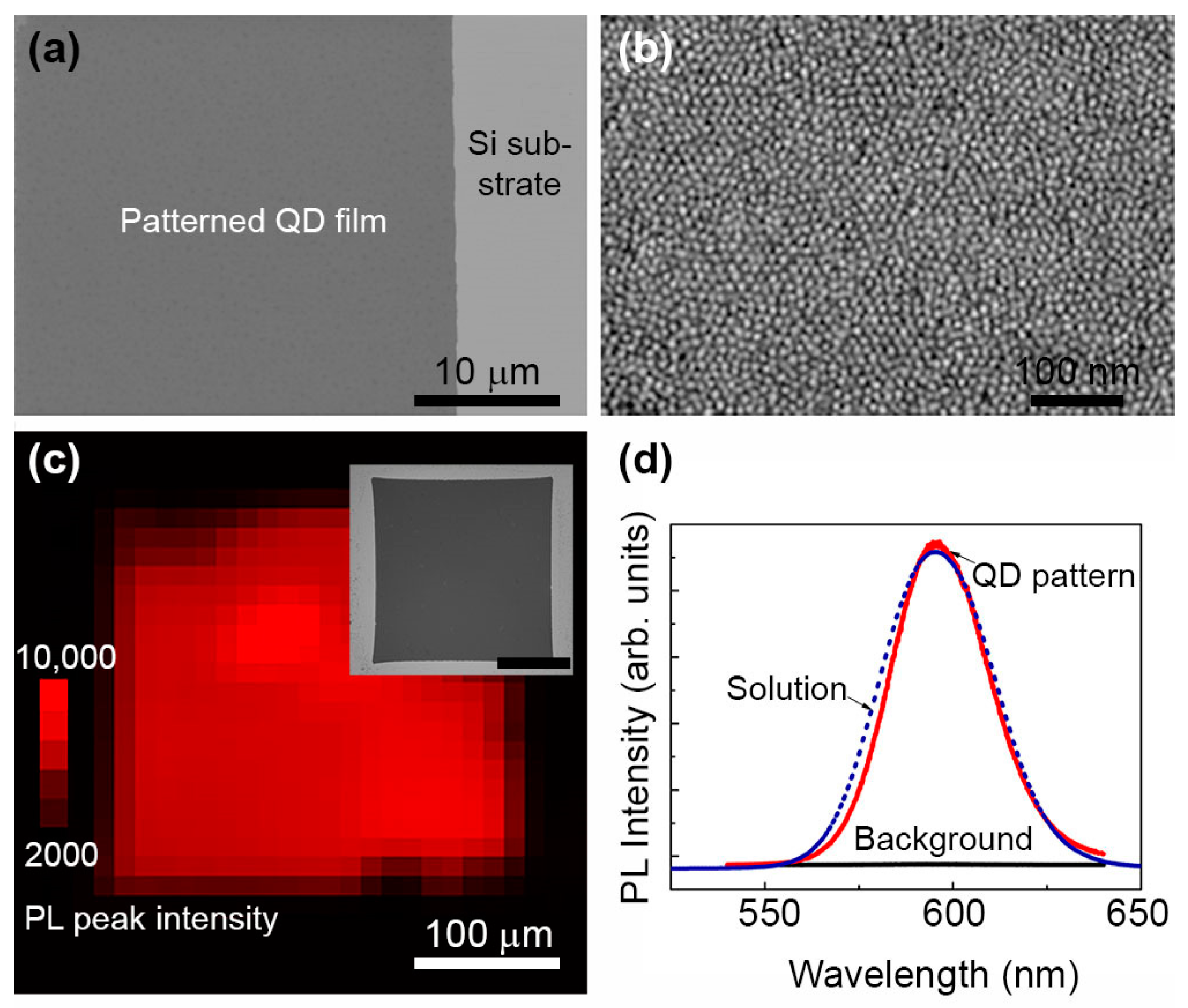 © 2017 by the authors. Licensee MDPI, Basel, Switzerland. This article is an open access article distributed under the terms and conditions of the Creative Commons Attribution (CC-BY) license ( http://creativecommons.org/licenses/by/4.0/).