Optofluidic Device Based Microflow Cytometers for Particle/Cell Detection: A Review
Next Article in Special Issue

A technique for shape-selective directed assembly of anisotropic, deformable, chemically-identical microcomponents onto patterned rigid templates based on shape and size differences is modeled and demonstrated. The assembly method not only controls the selective placement of the components, but also aligns the components with the assembly sites. Unlike the assembly of isotropic (spherical) microcomponents, in which only size differences can be used to discriminate among chemically-identical components to achieve selective placement, differences in both shape and size can enable selectivity in the assembly of anisotropic (non-spherical) microcomponents. The present selective directed assembly is driven by shape-matching to a microfabricated template to provide selectivity, uniform chemical surface functionalization to promote assembly, and megasonic excitation to prevent assembly into poorly shape-matched binding sites. A theoretical framework quantifies the predicted selectivity of this approach and predicts that it will be effective for many material combinations, including hydrogels and bio-compatible polymers. Experiments demonstrate successful directed assembly of cylindrical, hydrogel colloidal microcomponents with 26 μm mean diameter and 50 μm length into silicon templates patterned with hemicylindrical assembly sites. During the assembly, tapered microcomponents with 150 μm length and a nominal diameter of 26 μm that decreases along the components’ lengths were successfully excluded from hemicylindrical assembly sites. These results provide the first demonstration of selective directed assembly of non-spherical microcomponents by this approach. The assembly shows high local yields in agreement with theory. View Full-Text
Keywords: self-assembly; micromanufacturing; sorting; anisotropic; deformable; hydrogel; stop flow lithography self-assembly; micromanufacturing; sorting; anisotropic; deformable; hydrogel; stop flow lithography
►▼ Show Figures 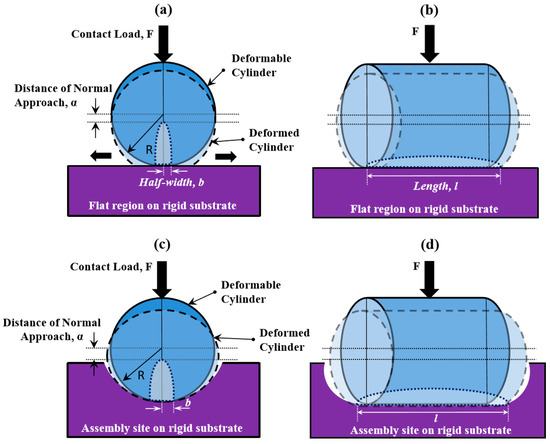