Micromachines Beyond Silicon-Based Technologies: A Letter from the New Editor-in-Chief
Next Article in Special Issue

Soft micro devices have attracted great interest for their potential applications in sensory skins and wearable bio-integrated devices. Just like in rigid systems, one path to achieving larger systems or systems at lower volumes at reasonable costs is to use printed circuit technology. To allow for stretchable printed circuit boards, the alignment of assembled micro sized components is an important step, where it normally requires precise positioning of the micro parts. However, to use common pick and place technology on surfaces that are skewed and stretched poses great difficulty in pattern recognition and positioning, which reduces throughput. One solution to reducing the demand of position accuracy is to let the components self-align.
Capillary self-alignment is based on the principle of minimum potential energy, where the gradient of the potential is designed to drive the parts towards desired locations. The key for successful capillary self-alignment is to confine the droplet inside the patterns. One promising approach toward preventing liquid spreading is to use a patterned surface where a large wetting contrast between patterns and their surrounding is preferred. Capillary self-alignment has been reported as achieving high-precision assembly on patterned oleophilic/superoleophobic surfaces [1], protruding patterns [2,3], hydrophilic/hydrophobic patterned surfaces [4,5,6,7,8,9], hydrophilic/superhydrophobic patterned surfaces [10,11] and all-hydrophobic patterns [12]. Moreover, high yield self-assembly has been reported in water [13]. In a recent industrial demonstration, a throughput of over 40,000 units per hour and micron accuracy positioning has been demonstrated [14]. Previously, capillary self-alignment has also been applied to flexible materials [15,16,17]. However, it is an open question if it is possible to achieve capillary self-alignment of chips on soft materials. To study this, we first need to create hydrophilic-hydrophobic patterns on a soft material, and understand the influence of the softness of the material to self-alignment parameters and processes.
In this work, we fabricated patterned soft surfaces that consist of flat hydrophilic pads surrounded by superhydrophobic PDMS surrounding. Using such a patterned PDMS substrate, we studied the capillary self-alignment and noticed that the system behaves differently in the alignment process compared to studied cases on rigid substrates. Here, we have provided a novel self-alignment strategy for the reliable alignment of microchips on soft PDMS substrates.

In our work, soft substrate is fabricated using polydimethylsiloxane (PDMS), which is one of the most commonly used materials in microfluidics [18] and stretchable electronics [19,20] due to its high compliance and biocompatibility. To achieve capillary self-alignment, it is essential to have a large wetting contrast between the pads and their surrounding [21]. Furthermore, based on our previous work, a superhydrophobic surrounding surface could largely increase the reliability and tolerance of the self-alignment [11]. Therefore, we have developed a simple stamping process for making superhydrophobic patterned PDMS surfaces. A patterned black silicon sample was prepared as a master, and PDMS was used as a stamp to replicate the micro- and nanostructures from the black silicon master. The patterned black silicon was fabricated according to a procedure reported in our previous work [10]. The fabricated master consists of 500 µm × 500 µm SiO2 square pads surrounded by the black silicon background coated with fluoropolymer (see Figure 1a). The measured static water contact angle on the SiO2 pad and black silicon substrate are 50° and 170°, respectively. The combination of the nanostructures on the black silicon and the low surface energy fluoropolymer coating are the main contributors for the superhydrophobicity of the substrate. To make superhydrophobic patterned PDMS surfaces, first, a PDMS mixture was prepared by mixing the base and curing agent at a ratio of 10:1, and the mixture was then degassed in a vacuum desiccator for 10 min to remove the air bubbles. Next, the mixture was poured over the black silicon master and baked in an oven at 75 °C for 90 min. After that, the cured PDMS was peeled off from the master and then functionalized with Trichloro (1H,1H,2H,2H-perfluorooctyl) silane (Sigma-Aldrich, St. Louis, Mo, USA) inside a vacuum desiccator for 12 h. Silane is a commonly used reagent in surface science to form a self-assembled monolayer for decreasing the surface energy. Scanning electron micrographs of the fabricated black silicon master and the replicated PDMS stamp are seen in Figure 1b–f. The surface of the black silicon master has pine-tree like structures (see Figure 1c), which consist of micro-scale cone structures and an over layer of short nano-scale needle-like structures. The structures on the black silicon master have been successfully replicated into the PDMS surface (see Figure 1e,f). Although the structures on the PDMS surface are the negative of the black silicon master, the hydrophobicity of the PDMS surface has been largely enhanced, as demonstrated in the measured static water contact angle (see Figure 1h). The measured static water contact angle on the flat pad is 66° (Figure 1g), while the water contact angle on the Trichlorosilane treated superhydrophobic PDMS surface is 160°. The large water contact angle indicates that the water droplet is in Cassie state on the PDMS surface with replicated micro- and nanostructures. The combination of the large wetting contrast and the superhydrophobicity of the PDMS surrounding are key to confining the liquid inside the pad, which is important for successful and reliable capillary self-alignment.
The parameters used in the PDMS replication process have been optimized by investigating a commonly used PDMS (Sylgard 184) with the base-to-agent mixing ratio of 10:1 and 15:1. The results indicate that the Sylgard 184 can be used to replicate micro- and nanostructures from black silicon. However, with the mixing ratio of 10:1, the PDMS substrate can be easily peeled off. With the base to curing agent ratio of 15:1, the compliance of the cured PDMS becomes much lower, which makes the peeling-off from the black silicon master very difficult. Another important parameter is the thickness of the PDMS substrate, which has a clear influence on the replicated micro structures. We fabricated PDMS stamps with different thicknesses from 0.2 mm to 2 mm, and the results are presented in Figure 2.
When the substrate is 0.2 mm thick, only part of the cone structures on the black silicon master are successfully replicated onto the PDMS stamp, and the needle-like nanostructures are not able to be replicated. As the thickness of the PDMS stamp increases, more structures can be replicated, as visualized in Figure 2. The reason for the imperfect replication on the thinner stamp could be that the thinner the stamp is, the shorter the curing time is; combined with less pressure by its mass, it does not allow for sufficient contact between the stamp and the black silicon structures.
Since electrical contacts in stretchable electronics are normally made of metal materials, we have fabricated metal pads on the PDMS surface. The superhydrophopic PDMS stamp was prepared using the same replication procedure introduced above. After the stamp was made, the sample surface was treated with plasma for improved adhesion; then, the sample was covered by a shadow mask and coated with 40 nm of Pd via sputtering. Using the same method, it was also possible to pattern the superhydrophobic PDMS with other metals such as Au or Al. The shadow mask was prepared by using a tape plotter and aligned so that Pd was only deposited on the flat pads. The fabricated superhydrophobic PDMS substrate with Pd pads is shown in Figure 3a, and the microstructures are seen in the scanning electron micrograph (Figure 3b). When a droplet of water was deposited on a Pd pad, the droplet was able to be confined inside the flat Pd pad (see Figure 3c). The accuracy of the Pd pad is mainly depending on the accuracy of the shadow mask, which is about 10 µm.

This work was supported by the Academy of Finland under grant 275117 Parallel Assembly of Inorganic Micro Components for Stretchable Electronics (2014–2017). The authors would also like to thank Ali Shah for the preparation of the black silicon sample and Aalto Nanofabrication Center at Micronova (Espoo, Finland) for provision of facilities and support in fabrication. 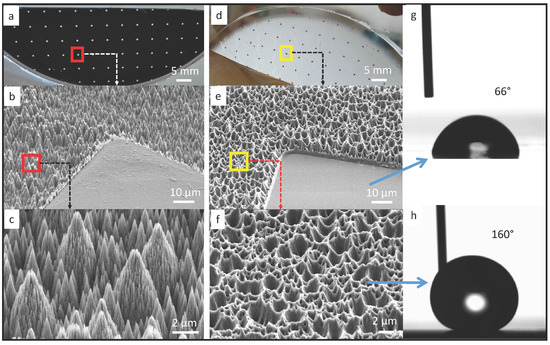 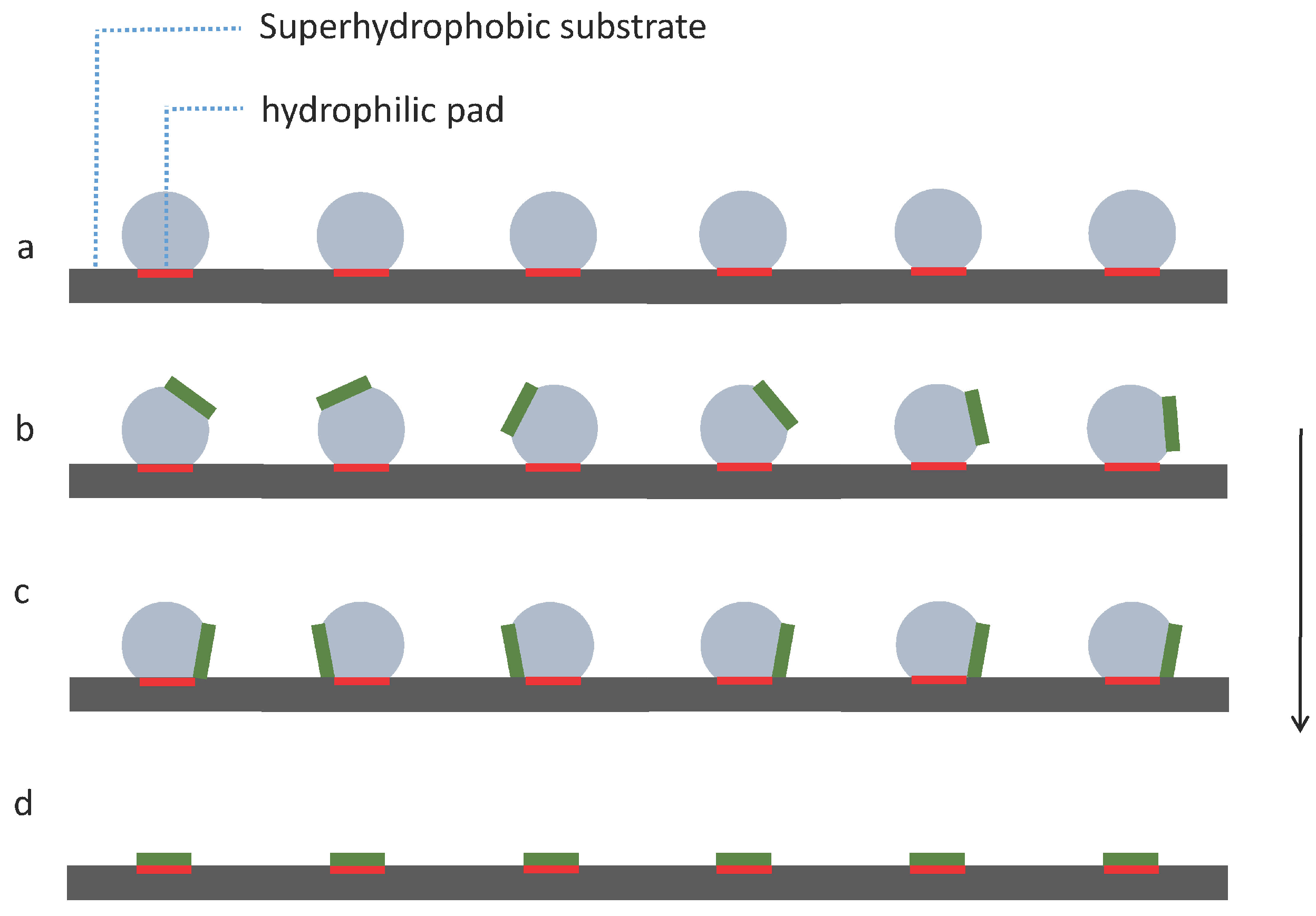 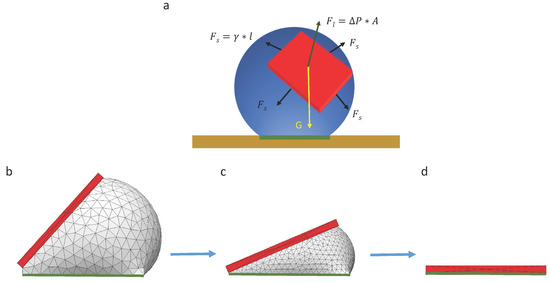 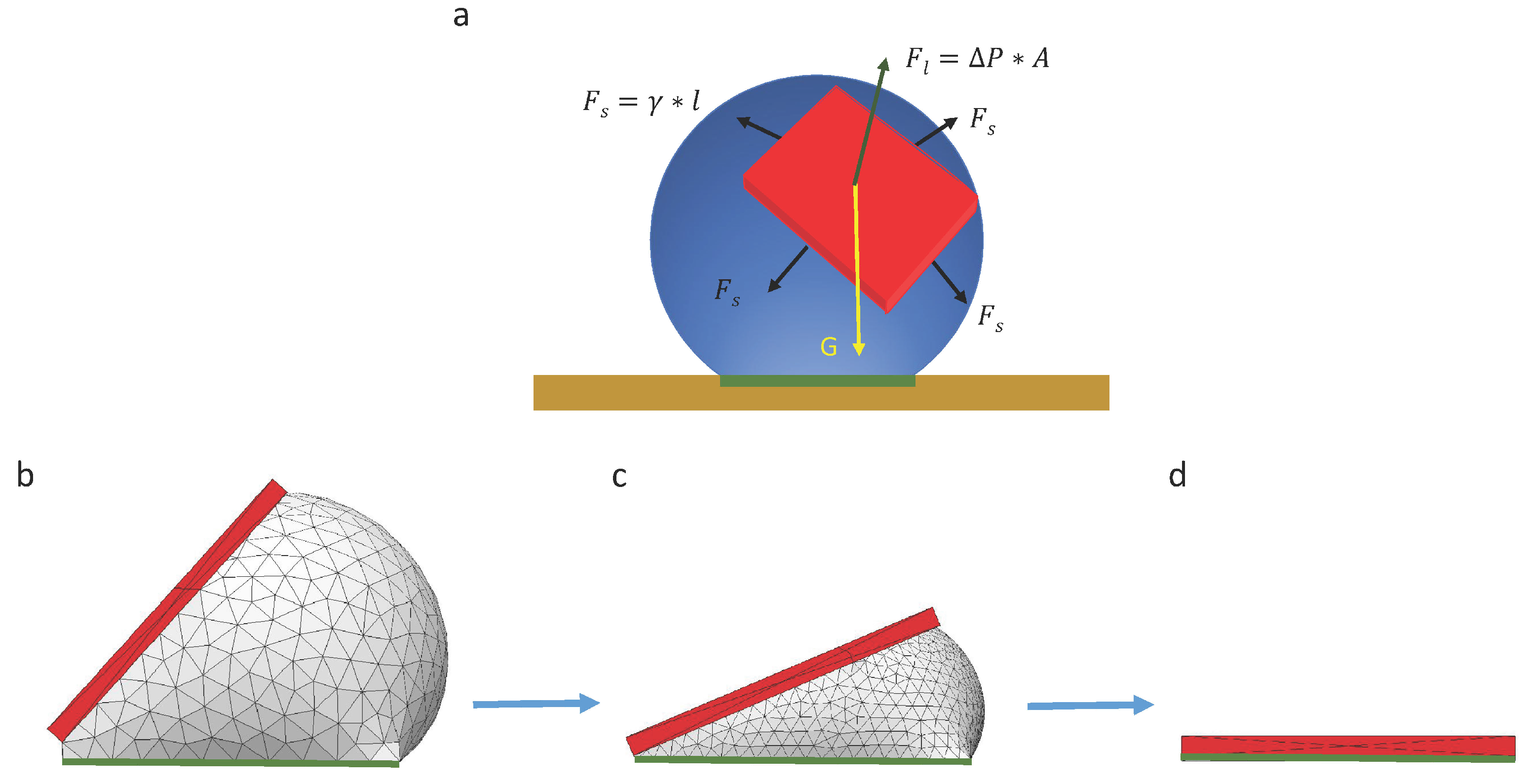 Table 1. Influence of volume of droplet on capillary self-alignment.