We studied the micropattern fidelity of a Norland Optical Adhesive 81 (NOA81) microsieve made by soft-lithography and laser micromachining. Ablation opens replicated cavities, resulting in three-dimensional (3D) micropores. We previously demonstrated that microsieves can capture cells by passive pumping. Flow, capture yield, and cell survival depend on the control of the micropore geometry and must yield high reproducibility within the device and from device to device. We investigated the NOA81 film thickness, the laser pulse repetition rate, the number of pulses, and the beam focusing distance. For NOA81 films spin-coated between 600 and 1200 rpm, the pulse number controls the breaching of films to form the pore’s aperture and dominates the process. Pulse repetition rates between 50 and 200 Hz had no observable influence. We also explored laser focal plane to substrate distance to find the most effective ablation conditions. Scanning electron micrographs (SEM) of focused ion beam (FIB)-cut cross sections of the NOA81 micropores and inverted micropore copies in polydimethylsiloxane (PDMS) show a smooth surface topology with minimal debris. Our studies reveal that the combined process allows for a 3D micropore quality from device to device with a large enough process window for biological studies. View Full-Text
Keywords: microsieve; replica molding; NOA81; excimer laser micromachining microsieve; replica molding; NOA81; excimer laser micromachining
►▼ Show Figures 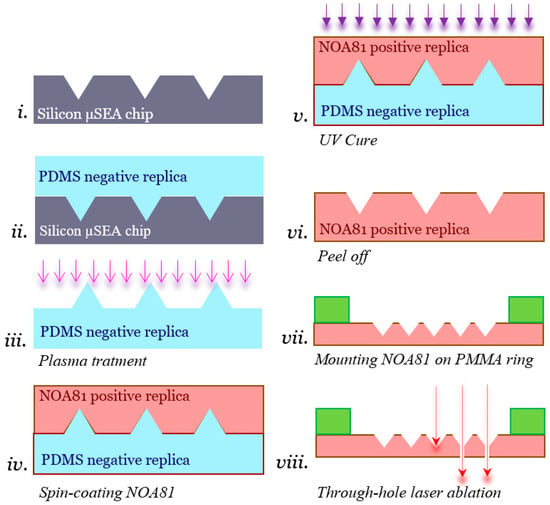