On-Chip Detection of the Biomarkers for Neurodegenerative Diseases: Technologies and Prospects
Next Article in Special Issue

Single-cell analysis offers great potential for understanding the complex biology of various diseases and can also assist with diagnosis. Many single-cell-level analysis tools and systems are currently being developed [1,2,3]. In particular, microchip technology, especially the microchip system for processing cells, called cell chips, could potentially be a powerful tool for the easy, rapid, accurate, and highly sensitive analysis of target single cells that exist within a large number of different cells. Many cell chips with types of microarray [4,5,6,7,8,9] and microfluidic [10,11,12,13] have been reported for single-cells analysis. In particular, cell microarray chips are useful for high-throughput screening and analysis for cells. The fluorescent labeled antibodies [14,15,16,17,18] or fluorescent labeled DNA-based probes [19,20,21,22,23,24,25,26] are commonly used to screen for and analyze target cells. Although these probes have high sensitivity and specificity, it is difficult to detect slightly expressed proteins or the few nucleotide-mutated genes. In addition, it is more difficult to analyze these targets at single cells level. Recently, the screening and detection of anticancer drug-resistant cancer cells harboring single nucleotide-mutated genes has focused on cancer diagnosis [27,28,29]; therefore, we aimed to detect and isolate the single cells expressing the single nucleotide-mutated mRNA from multiple non-mutated cancer cells using our original cell chip technology and peptide nucleic acid (PNA)-based probes with high specificity.
In this study, lung cancer cells were used as a model to analyze the single nucleotide-mutated cancer cells. Lung cancer cells harbor various gene mutations in the epidermal growth factor receptor (EGFR) gene. Tyrosine kinase inhibitor (TKI), represented by Gefitinib, is a molecular-targeting anticancer drug that binds to the tyrosine kinase domain of the EGFR protein [30,31,32]. Gefitinib inhibits the signal transduction of the epidermal growth factor signal and induces cell death [33]. It is reported that cancer cells with the EGFR gene mutation (in particular, exon19del E746-A750 and L858R) respond to Gefitinib [31,32,33,34,35]. However, long-term administration of Gefitinib induces TKI-resistant cells. These cells often carry the T790M-mutation [36,37,38,39]. T790M-mutated EGFR protein loses its binding affinity with Gefitinib and becomes resistant to TKI [40]. Therefore, analysis of the composition ratio or the number of T790M-mutated cancer cells is necessary for the diagnosis and efficient treatment of lung cancer. A DNA-sequencing system is commonly used when analyzing EGFR gene mutation; in particular, the next-generation sequencer (NGS) excels at providing accurate analysis [41,42]. However, at least 20% of cancer cells in a cell sample must contain the target mutation [43,44,45]. Therefore, the DNA-sequencing system is not suitable for early diagnosis, at which point only a small number of mutated cancer cells are present. Although real-time PCR-based analyzing systems have high sensitivity, they also require that 5–10% or more of the total cancer cell samples harbor the target mutation [46,47]. These conventional methods also require expensive equipment, time-consuming detection (3–5 h for typical PCR systems), and expert technical knowhow. Image analysis is a promising method for detecting a small number of mutated cancer cells; however, it is difficult to analyze mutated cells at the single-cell level using general antibodies or other probes. In a previous study, we reported the novel fluoresce labeled PNA-DNA-based probes for the image analysis of three EGFR-mutated genes (exon19del E746-A750, L858R, and T790M) [48]. Using the PNA-DNA probes, we succeeded in specifically detecting EGFR-mutated cells. However, because of the limited number of mutated cancer cells analyzed using the normal slide-glasses or microwell-plates formats, it is difficult to calculate the ratio or detect an accurate number of rare mutated cancer cells contained within multiple cells.
In this study, we have developed a new detection system for single nucleotide-mutated cancer cells at the single-cell level using our original techniques combined with a single-cell microarray chip [7] and PNA-DNA probes [48]. After the T790M-mutated lung cancer cell line (NCI-H1975), as a model of anticancer drug-resistant cancer cells, was spiked into non-mutated cancer cells (A549), all cancer cells were separated into single cells using the single-cell microarray chip. Target T790M-mutated cancer cells (NCI-H1975) were discriminated from the non-mutated cancer cells (A549) using PNA-DNA probes on the chip.

2.1. Construction of a Single-Cell Microarray Chip

The single-cell microarray chip consisted of 62,410 microchambers, with an upper diameter of 31–40 µm, a lower diameter of 11–20 µm, a depth of 28 µm, and a pitch of 100 µm. It was made of polystyrene using an ultraviolet-lithographie galvanoformung abformung (UV-LIGA) process designed by SEIKOH GIKEN Co. Ltd., Chiba, Japan (Figure 1a). Using UV-lithography, a photoresist substrate was exposed to and patterned with a metal photomask on a glass plate. The resulting patterned photoresist substrate was used to create a nickel mold with microstructures that were generated by electroforming. Finally, the polystyrene microarray chip was fabricated from the nickel mold using injection molding. Each microarray chip consisted of 10 different-sized patterns of clusters, and each cluster consisted of 6241 (79 × 79) microchambers. Each microchamber had the shape of a circular cone frustum and was able to accommodate cells.

The surface of the single-cell microarray chip was hydrophilized with an oxygen plasma treatment using soft plasma-etching equipment (SEDE-PFA, Meiwafosis Co., Ltd., Tokyo, Japan), which made single-cell separation and analysis easier. The exposure time and electric current for plasma etching were described in previous studies [7].

The detailed structure and principles of the target detection of PNA-DNA probes were described in previous reports [48]. Briefly, fluorescein isothiocyanate (FITC)-conjugated PNA (FITC-PNA; fluorescein-O-Linker-PNA(CTGCATGATG)-k-k; Panagene, Daejeon, Korea) and quencher-conjugated DNA (Q-DNA; TCATGCAG-Dabcyl; Integrated DNA Technologies, Coralville, IA, United States) were prepared. PNA-DNA probes were constructed by the hybridization of the synthesized FITC-PNA and Q-DNA. FITC-PNA and Q-DNA (10 µM final) were mixed in a PBS solution and self-assembled with an annealing program, as follows. The mixed reagent was heated at 95 °C for 5 min for denaturing. To hybridize the FITC-PNA and Q-DNA, the temperature was gradually decreased to 30 °C at the rate of −1.38 °C per minute. Finally, the mixture was incubated at 30 °C for 10 min and kept at 10 °C. The product was used directly in further experiments.

Human lung carcinoma cells lines, NCI-H1975 and A549 (ATCC, Manassas, VA, United States), were cultured in RPMI 1640 (Nakalai Tesque, Kyoto, Japan), containing 10% fetal bovine serum and antibiotics (100-U/mL penicillin–streptomycin (Gibco, Life Technologies Corporation, CA, United States)), and were subsequently harvested using trypsin. The various concentrations (0%, 5%, 10%, 20%) of NCI-H1975 and A549 suspension were each prepared at a concentration of 1.0–1.2 × 107 cells/mL of medium. Each cell sample (500 µL) was used for analysis on the single-cell microarray chip.

3.1. Separation and Analysis of the Different Lung Cancer Cell Lines on the Single-Cell Microarray Chip

3.2. Detection of T790M-Mutated Cancer Cells Using the Combined Technologies of the Single-Cell Microarray Chip and the PNA-DNA Probe

This work was supported by the JSPS KAKENHI Grant Numbers 18K15299 and the JST CREST Grant Number JPMJCR15G4. 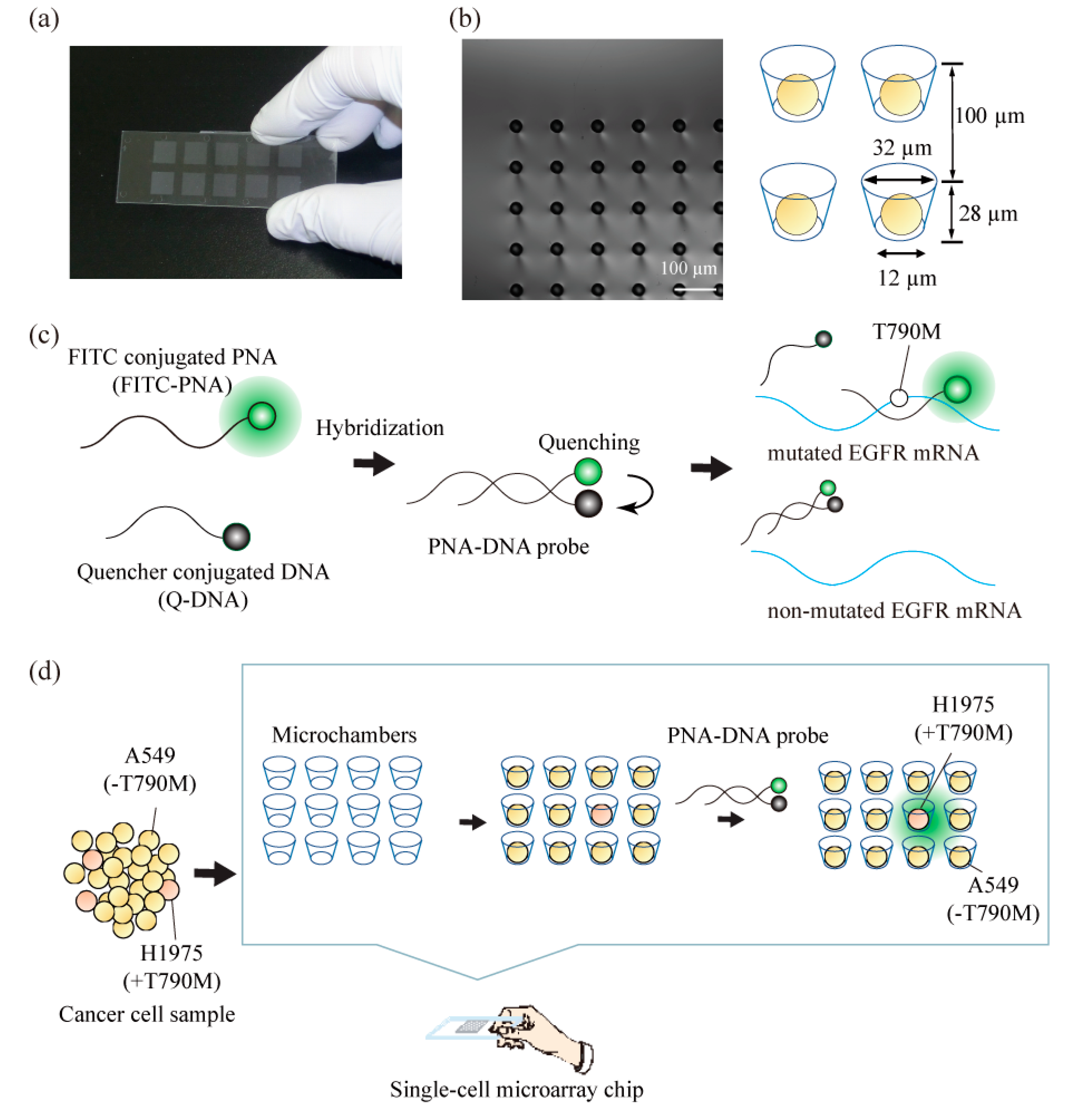 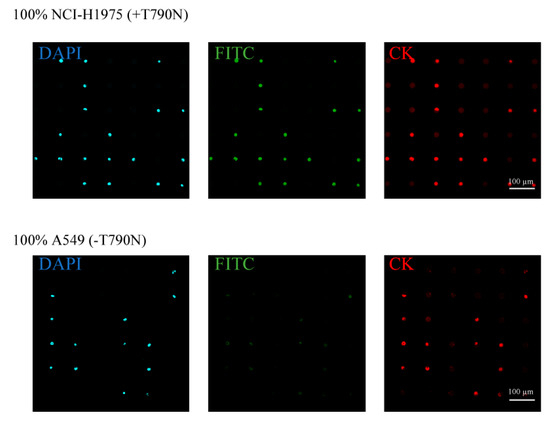 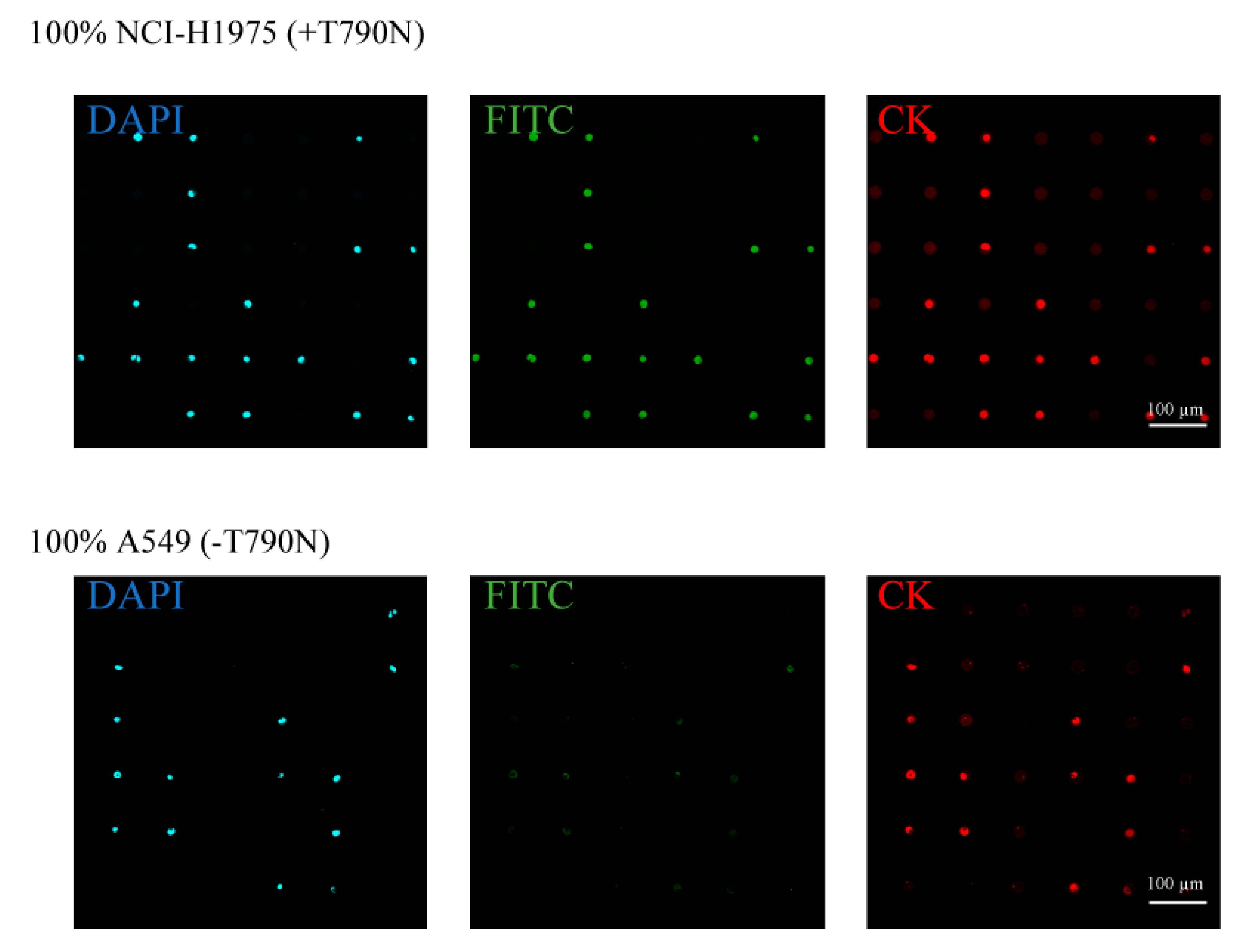 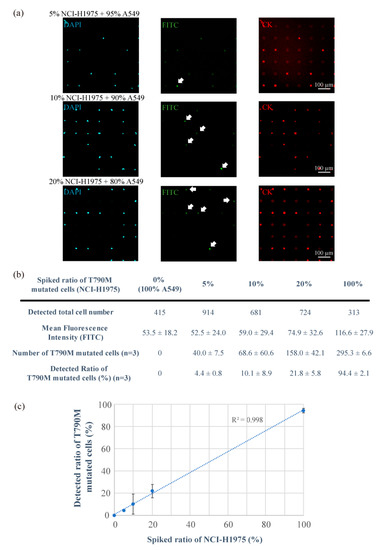