Droplet-Based Screening for the Investigation of Microbial Nonlinear Dose–Response Characteristics System, Background and Examples
Next Article in Special Issue

A variety of force fields have thus far been demonstrated to investigate electromechanical properties of cells in a microfluidic platform which, however, are mostly based on fluid shear stress and may potentially cause irreversible cell damage. This work presents dielectric movement and deformation measurements of U937 monocytes and U937-differentiated macrophages in a low conductive medium inside a 3D carbon electrode array. Here, monocytes exhibited a crossover frequency around 150 kHz and presented maximum deformation index at 400 kHz and minimum deformation index at 1 MHz frequencies at 20 Vpeak-peak. Although macrophages were differentiated from monocytes, their crossover frequency was lower than 50 kHz at 10 Vpeak-peak. The change of the deformation index for macrophages was more constant and lower than the monocyte cells. Both dielectric mobility and deformation spectra revealed significant differences between the dielectric responses of U937 monocytes and U937-differentiated macrophages, which share the same origin. This method can be used for label-free, specific, and sensitive single-cell characterization. Besides, damage of the cells by aggressive shear forces can, hence, be eliminated and cells can be used for downstream analysis. Our results showed that dielectric mobility and deformation have a great potential as an electromechanical biomarker to reliably characterize and distinguish differentiated cell populations from their progenitors. View Full-Text
Keywords: dielectrophoresis; deformation; mobility; heterogeneity; macrophage; monocyte dielectrophoresis; deformation; mobility; heterogeneity; macrophage; monocyte
►▼ Show Figures 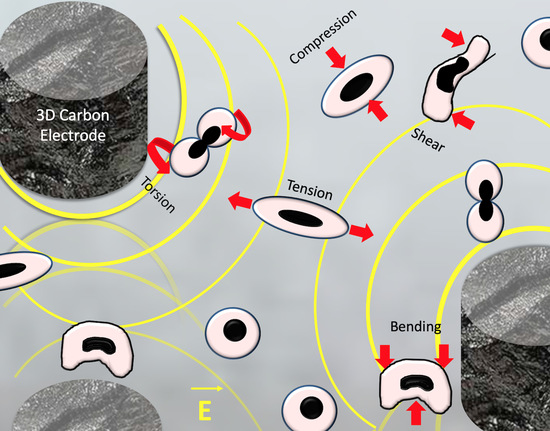 
Elitas, Meltem, and Esra Sengul. 2020. "Quantifying Heterogeneity According to Deformation of the U937 Monocytes and U937-Differentiated Macrophages Using 3D Carbon Dielectrophoresis in Microfluidics" Micromachines 11, no. 6: 576. https://doi.org/10.3390/mi11060576