Magnetoresistance (MR) based biosensors are considered promising candidates for the detection of magnetic nanoparticles (MNPs) as biomarkers and the biomagnetic fields. MR biosensors have been widely used in the detection of proteins, DNAs, as well as the mapping of cardiovascular and brain signals. In this review, we firstly introduce three different MR devices from the fundamental perspectives, followed by the fabrication and surface modification of the MR sensors. The sensitivity of the MR sensors can be improved by optimizing the sensing geometry, engineering the magnetic bioassays on the sensor surface, and integrating the sensors with magnetic flux concentrators and microfluidic channels. Different kinds of MR-based bioassays are also introduced. Subsequently, the research on MR biosensors for the detection of protein biomarkers and genotyping is reviewed. As a more recent application, brain mapping based on MR sensors is summarized in a separate section with the discussion of both the potential benefits and challenges in this new field. Finally, the integration of MR biosensors with flexible substrates is reviewed, with the emphasis on the fabrication techniques to obtain highly shapeable devices while maintaining comparable performance to their rigid counterparts. View Full-Text
Keywords: magnetoresistance; biosensors; MNPs; immunoassay; genotyping; flexible devices; brain mapping magnetoresistance; biosensors; MNPs; immunoassay; genotyping; flexible devices; brain mapping
►▼ Show Figures 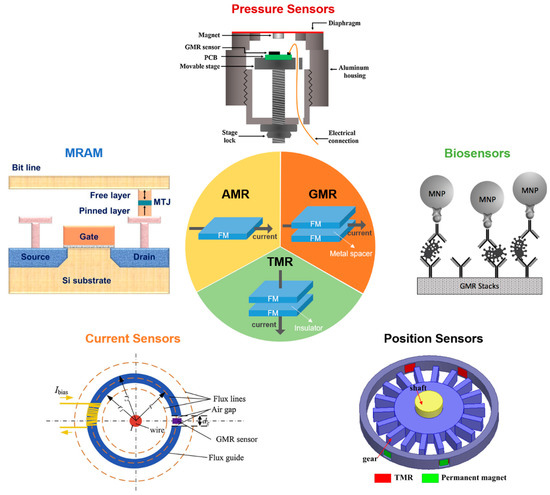