Ferrofluid-based micromixers have been widely used for a myriad of microfluidic industrial applications in biochemical engineering, food processing, and detection/analytical processes. However, complete mixing in micromixers is extremely time-consuming and requires very long microchannels due to laminar flow. In this paper, we developed an effective and low-cost microfluidic device integrated with microscale magnets manufactured with neodymium (NdFeB) powders and polydimethylsiloxane (PDMS) to achieve rapid micromixing between ferrofluid and buffer flow. Experiments were conducted systematically to investigate the effect of flow rate, concentration of the ferrofluid, and micromagnet NdFeB:PDMS mass ratio on the mixing performance. It was found that mixing is more efficient with lower total flow rates and higher ferrofluid concentration, which generate greater magnetic forces acting on both streamwise and lateral directions to increase the intermixing of the fluids within a longer residence time. Numerical models were also developed to simulate the mixing process in the microchannel under the same conditions and the simulation results indicated excellent agreements with the experimental data on mixing performance. Combining experimental measurements and numerical simulations, this study demonstrates a simple yet effective method to realize rapid mixing for lab-on-chip systems. View Full-Text
Keywords: micromixer; microfluidics; ferrofluid; magnetic field; neodymium (NdFeB) powders micromixer; microfluidics; ferrofluid; magnetic field; neodymium (NdFeB) powders
►▼ Show Figures 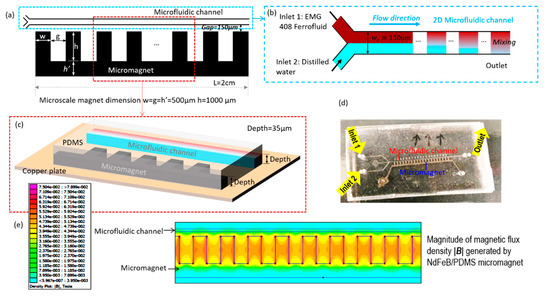