Nanotechnology has gradually become an independent and comprehensive research field since the late 1980s, including microscopy, microelectronics, bioanalytical technology, nanomechanics, and electronics [1,2]. The rapid development of many disciplines, such as biology, has also enabled researchers to obtain deeper understanding regarding the macro and micro worlds. Materials whose structural units are in the nanometer scale (1–100 nm) in at least one dimension or assembled in this range are called nanomaterials or nanostructured materials [3]. When compared with traditional materials, the structure and properties of nanomaterials have changed in essence. At present, nanomaterials have been widely recognized as "the most promising materials in the 21st century" and they are widely used in various fields, such as catalysts, biomedical materials, luminescent materials, insulating materials, and building materials [4,5,6].
When compared with conventional materials, nanomaterials exhibit special properties, including: (1) surface effect: the smaller the diameter of the nanoparticles will have the larger the ratio of the number of surface atoms to the total number of atoms, which in turn causes a sudden change in the properties of the nanoparticles. The concentration of atoms on the surface of the particles will increase the surface energy, as well as the dangling bonds, and can cause the insufficient coordination of the surface atoms, making it easy to combine with other atoms and enhance chemical activity [7,8]; (2) the macroscopic quantum tunneling effect: according to the classical mechanical principle, microscopic nanoparticles can pass through the barrier, because the total kinetic energy of nanoparticles is less than the barrier height. The ability of the nanoparticle to penetrate the barrier is called macroscopic quantum tunneling, which is the basis of future microelectronic devices, including electrochemical immunosensor. When microelectronic devices are further miniaturized, the quantum effects must be considered, because it establishes the limit of size [9]; (3) quantum size effect: the electron energy level of the nanoparticles near the Fermi surface will change from the quasi-continuous energy level to the discrete energy level, or the energy gap becomes wider after the size of the nanoparticle is as small as a certain value, which results in the thermal, electrical, optical, acoustic, magnetic, and superconducting properties of the particles are significantly different from conventional materials [10]. In addition, nanomaterials also have volume effects [11], dielectric effects [12,13], and so on.
Nanomaterials have multiple methods for classification, depending on the discipline and perspective. Nanomaterials can be divided into three categories, according to the dimensions of the basic units. The first category is zero-dimensional nanomaterial, such as quantum dots and atomic clusters, all of which are in the order of nanometers [14,15]. The second is one-dimensional nanometers nanomaterials, such as nanorods and nanowires, which have two dimensions in the three-dimensional space [16,17]. The last category is two-dimensional nanomaterials, such as superlattices and nano-films [18,19]. The methods for preparing nanomaterials have been continuously developed and enriched since the successful development of metal nanoparticles in the 1970s. Owing to the great application potential of nanomaterials, how to prepare nanomaterials with excellent performance, high efficiency, and low cost is still a hot spot for international researchers [20,21]. At present, the main preparation methods of nanomaterials include physical methods, comprehensive methods, and chemical methods. The physical methods include mechanical grinding, evaporation condensation, laser beam, and ion sputtering [22,23,24]. The chemical methods include microemulsion methods, electrochemical deposition method, complex decomposition method, and hydrothermal method [25,26,27]. The comprehensive method mainly contains the laser gas phase synthesis method, ultrasonic chemical method, and plasma enhanced chemical deposition method [28,29].
The electrochemical immunosensor based on antigen-antibody immunoreactivity is the largest class of electrochemical methods being used for protein analysis in biological research and clinical testing. Traditional immunoassays include enzyme-linked immunosorbent assays [30], immunoblot analysis [31], radio immunoassays, and immune electrophoresis [32,33], which are mainly based on the changes of signal that are generated by specific binding of target proteins to known antibodies [34]. Electrochemical immunoassay, as a currently mature technique, has displayed advantages with high sensitivity of electrochemical technology and high specificity of immune recognition reaction, so it can be used in many fields [35,36]. Electrochemical immunoassays can be broadly classified into label-free sensor and labeled sensor. The signal amplification is the core of the preparation electrochemical biosensor, which was realized by nanomaterials modification on the surface of electrode. The immunosensor can selectively identify the analyte by the capture antibody. After that, the label-free electrochemical immunoassay determines the concentration of the analyte by directly measuring the antigen-antibody specific recognition of the change in the electrochemical signal that is generated after binding. The electrochemical impedance signal can effectively reflect various physical and chemical processes that occur on the surface of the electrode, and thus it is often applied for the detection of proteins. The sandwich-type electrochemical immunosensor also used the Ab2, which is often labeled by electrochemical probe and nanomaterials. Last, as the main body of the signal converter, the electrode can derive the identification signal that is generated on the surface of the electrode and convert it into an electrical signal, including current, voltage, and resistance, which can be measured and analyzed in order to achieve the qualitative or quantitative analysis of the analysis target. Figure 1 shows the operating principle of electrochemical immunosensor.

2.1. Electrochemical Immunosensor Based on Carbon Nanomaterials

2.2. Electrochemical Immunosensor Based on Quantum Dots

Quantum dot (QD) that was composed of III-V atoms (such as GaAs, InP) or II-VI atoms (such as CdTe, CdS), also known as semiconductor nanocrystal, is a uniform inorganic nanoscale particle that is generally within 10 nm in diameter with a core/shell structure [78,79]. QD is an excellent tool to prepare an electrochemical immunosensor, because it has all of the special properties of nanomaterials, including quantum size effects, surface effects, and unique characteristic of high electron density [80,81]. Several researchers have reported the use of voltammetry to detect QDs as electrochemical labels, taking advantage of their redox properties [82,83,84]. Table 3 summaries the QD nanomaterials-based electrochemical immunosensors.
A novel magneto-controlled electrochemical immunosensor was constructed for the sensitive detection of low-abundance protein (IgG1) with a sandwich-type assay that was based on CdS QD-doped bovine serum albumin (QD-BSA) and IgG1-functionalized magnetic bead [85]. The electrochemical signal was studied while using anodic stripping voltammetric analysis of cadmium ion released by acid from quantum dot. Lin et al. [86] developed an electrochemical immunosensor for the detection of organophosphorylated butyrylcholinesterase (OP-BChE), which is a specific biomarker for exposure to toxic organophosphorus agents. QD was employed to tag anti-BChE antibody in order to amplify the signal. The prepared immnosensor displayed a highly selective and sensitive response to the target. Gong et al. [87] reported electrochemical immunosensors for the detection of prostate specific antigen (PSA) that was based on QD functionalized graphene sheets (GS-QD). The immunosensor was capable of detecting PSA in serum samples. Employing carbon QDs-graphene oxide-PEI-Au nanohybrid (CQDs-PEI-GO/AuNPs) as a probe to sense carbohydrate antigen 15-3 (CA15-3) was used to develop a novel electrochemiluminescence immunosensor (Figure 11) [88]. The Ab1 was linked on Ag nanoparticles and polydopamine (AgNPs-PDA), which had large surface area. The immusensor exhibited excellent performance, owing to the synergistic effect of the nanocomposite materials. A miniaturized electrochemical immunosensor was established by using 8-channel screen-printed carbon arrays and IgG labeled with CdSe/ZnS QDs for the detection of anti-transglutaminase antibodies (a celiac disease biomarker, tTG) in human sera [89]. The developed miniaturized electrochemical immunosensor is easier to use for clinic detection.
Several electrochemical immunosensors while using QD are the focus on the detection of marker proteins on the surface of cell. For example, aiming to realize the simultaneous determination of EpCAM and GPC3 antigens on the surface of the human liver cancer cell line, M. Hui et al. [90] took advantage of CdTe QD-coated silica nanoparticles and ZnSe QD-coated silica nanoparticles to link the antibodies of EpCAM and GPC3, respectively. Chitosan-electrochemically reduced graphene oxide film (CS-GO) modified glassy carbon electrode (GCE) was used to immobilize the Ab1. The immunosensor showed superior reproducibility, accuracy, and stability. Similarly, Zhu et al. [91] reported a dual-signal-marked electrochemical immunosensor for the simultaneous detection of B-cell lymphoma 2 (Bcl-2) and Bcl-2-associated X protein (Bax), which are often used to monitor the apoptosis of tumor cells and to evaluate the cancer drug effect (Figure 12). [email protected] QDs and Ag nanoclusters were used to connect with Ab2 of Bcl-2 and Bax, respectively. The electrochemical signal was amplified by mesoporous silica and graphene, which could provide abundant surface area for absorbance of probes and Ab1. Under anodic stripping voltammetry detection, Cd and Ag would be oxidized and produce currents under different potential, which represents the concentration of Bcl-2 and Bax, respectively. 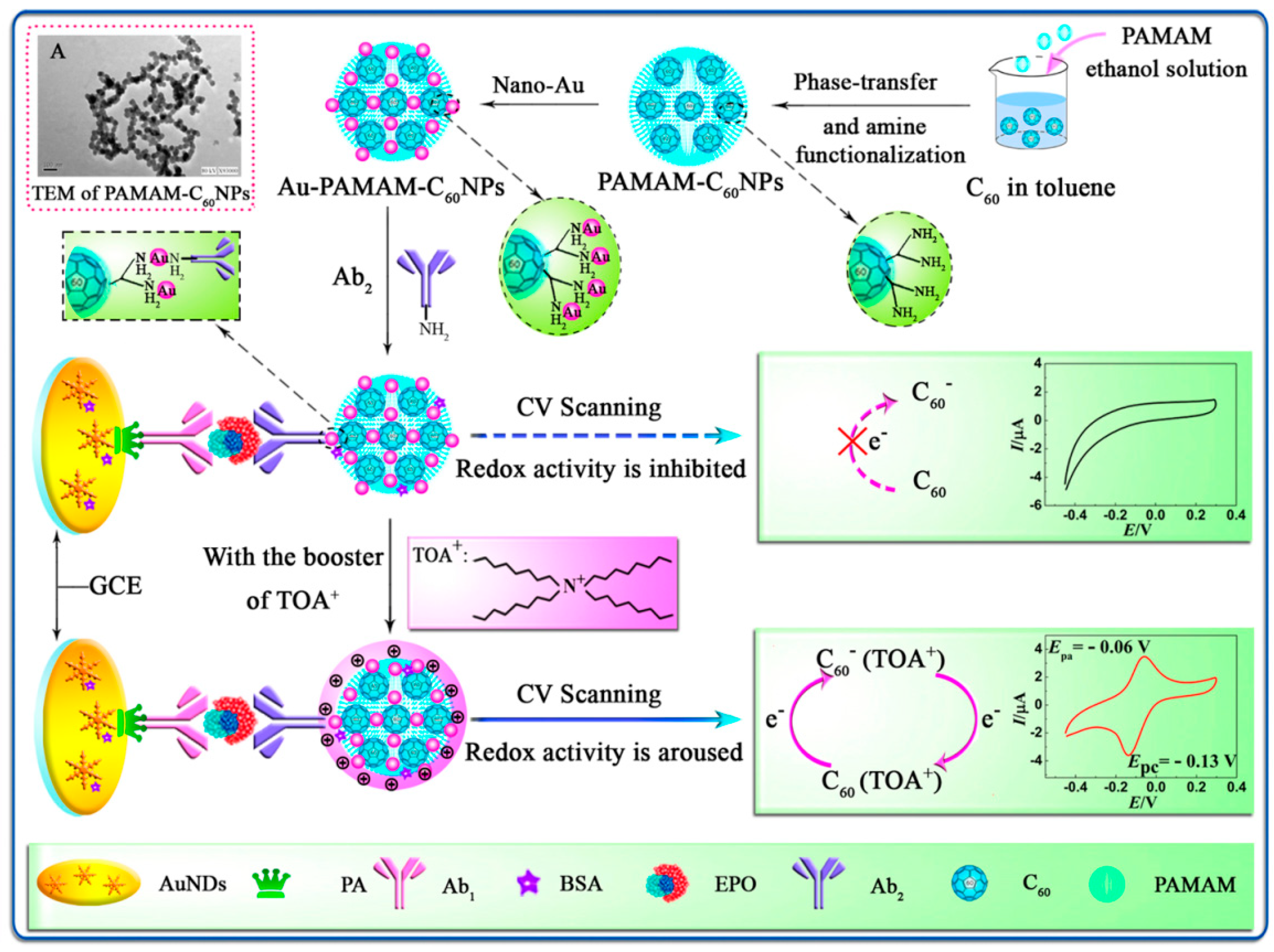 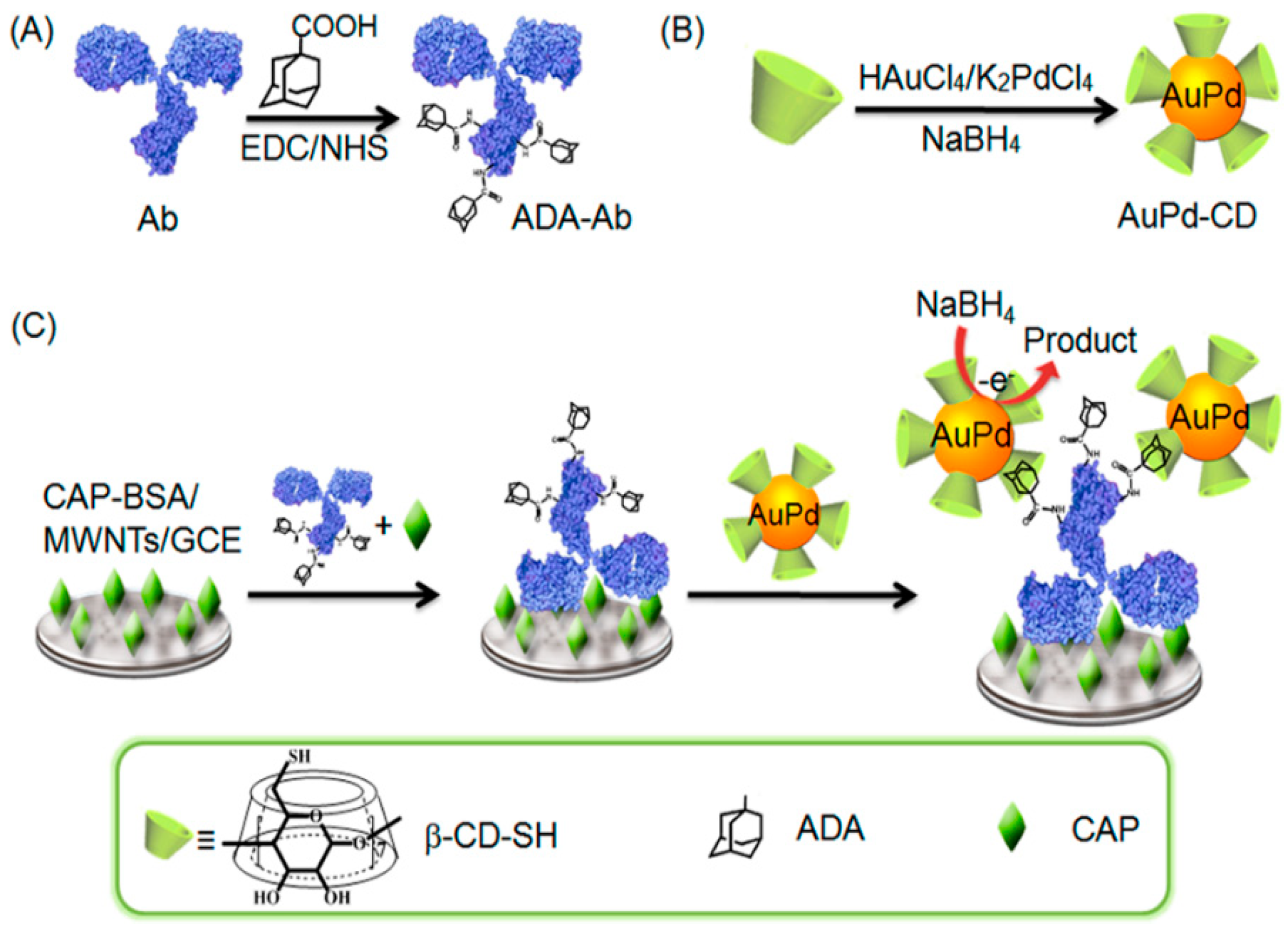 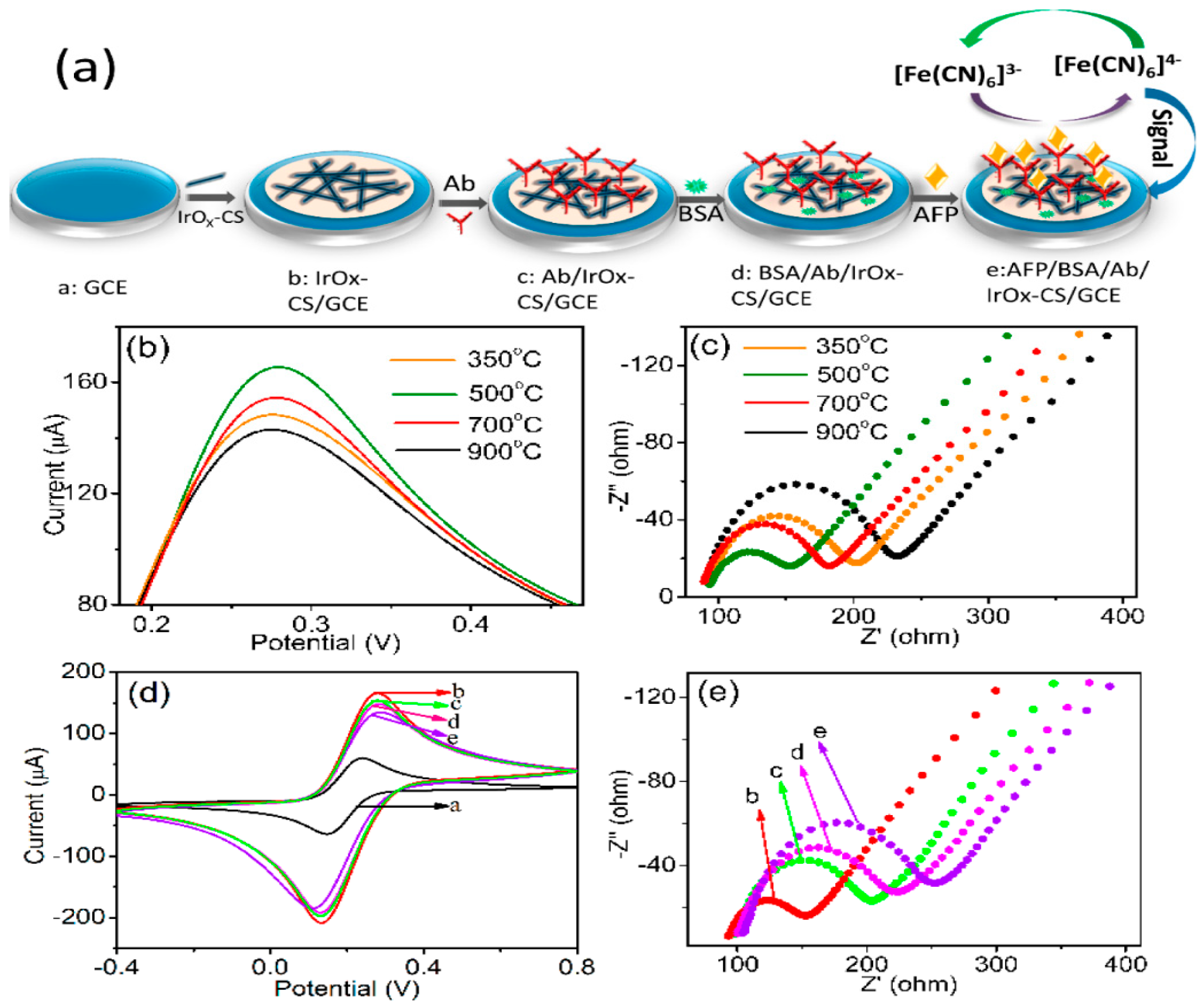 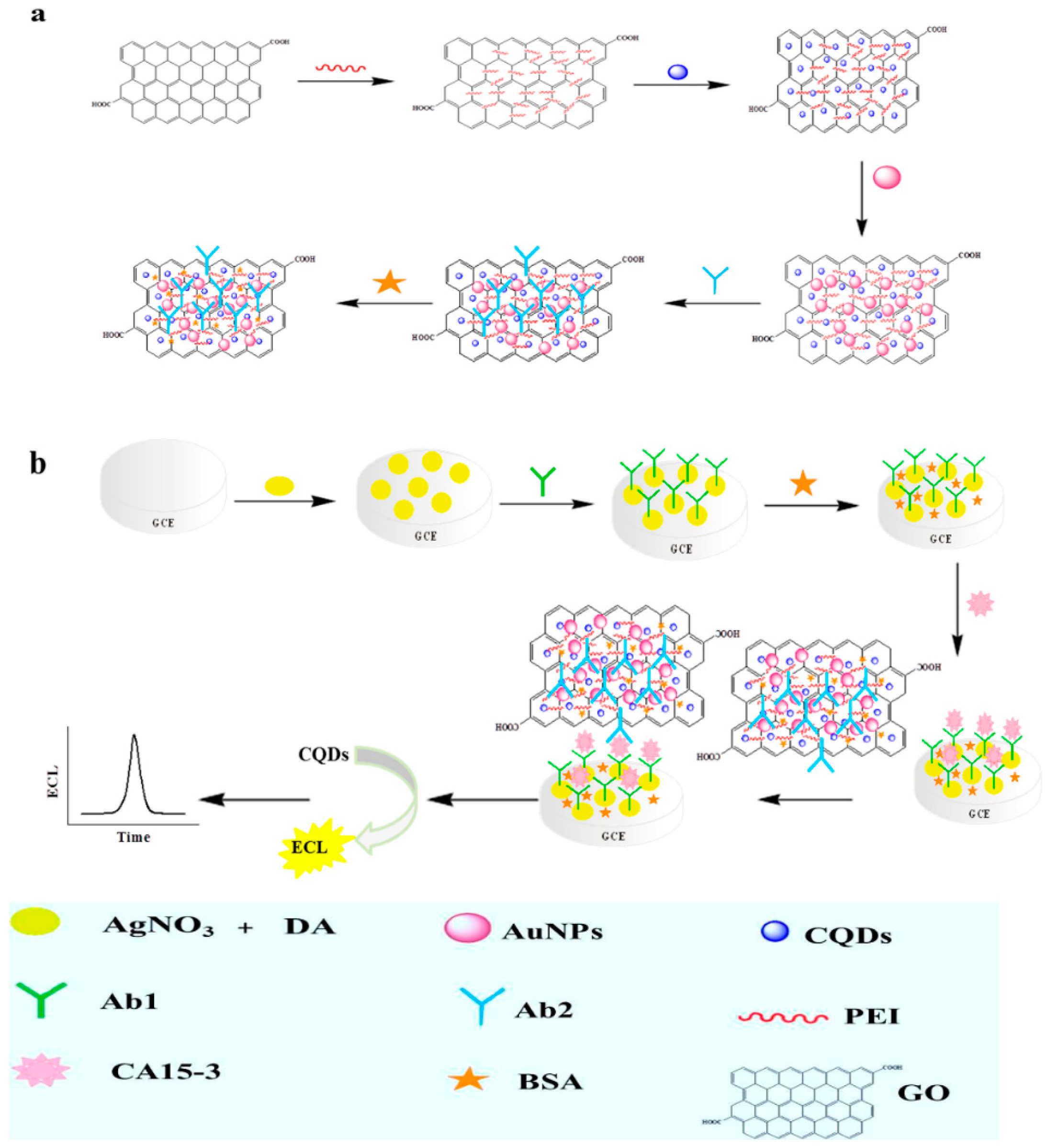