Low-temperature wafer bonding is increasingly required due to the increasing use of heterogeneous integrations [1,2,3]. An effective approach to such bonding is to use intermediate layers [4,5]. Gold (Au) is a good candidate material for these bonding layers because of its high electrical and thermal conductivity, good deformability, and high oxidation resistance.
Several Au–Au bonding techniques have been investigated to achieve low-temperature bonding, including thermocompression bonding [6,7,8,9,10,11,12], atomic diffusion bonding [4,13,14], and surface activated bonding (SAB) [15,16,17,18,19]. With SAB, the surfaces to be bonded are activated by plasma pretreatment and then bonded at low temperature (<150 °C). Furthermore, the use of Au for the bonding layer enables bonding in ambient air because gold oxide (Au2O3) is the only metal oxide that has a positive formation enthalpy (+19.3 kJ/mol) [20]. The use of SAB with little contact pressure at room temperature in ambient air using ultrathin (<50 nm) Au films with smooth (root mean square (RMS) <0.50 nm) surfaces was recently shown to result in reliable Au–Au bonding [17].
While Ar plasma is commonly used to activate Au surfaces by physically bombarding them with Ar ions or atoms, O2 plasma is commonly used to clean surfaces because it can eliminate organic contaminants by chemical reaction [21,22]. It is also used for pretreatment before Au–Au bonding; O2 plasma treatment has been reported to more effectively improve Au wire bond interfacial adhesion than Ar plasma treatment [23,24]. However, the Au–Au bonding may be weakened by the mixing of O2 gas into the plasma processing gas [25,26]. The effect of plasma treatment, and especially the effect of O2 plasma treatment on Au–Au bonding, thus needs further investigation.
This paper reports the investigation of Ar plasma vs. O2 plasma as a pretreatment method for room-temperature wafer-scale Au–Au bonding using ultrathin Au films (<50 nm) in ambient air. The main difference between Ar plasma and O2 plasma is their surface activation mechanism: physical etching and chemical reaction, respectively. The investigation included an analysis of Au surfaces treated with Ar or O2 plasma.

Silicon substrates with Au film and a Ti adhesion layer were used for analysis and bonding. A Ti adhesion layer followed by Au thin film was deposited on a Si substrate or a thermally oxidized Si substrate by direct current (DC) sputtering at a substrate temperature of 25 °C. The Ar or O2 plasma used to activate the surfaces was generated by applying 200 W radio frequency (RF) power at 60 Pa. Both plasmas were generated using the same equipment; only the process gas was changed.
The effect of each plasma treatment on the surface properties was determined by evaluating the surface roughness, hydrophilicity, electrical characteristics, and chemical state of the Au surfaces before and after each treatment. Surface roughness was measured using an atomic force microscope (AFM, Hitachi High-Tech Science Co., Tokyo, Japan, L-trace) and Si wafers with Au thin film (thickness: 15 nm) and a Ti adhesion layer (thickness: 5 nm). The AFM measurement was performed with a scan area of 500 nm × 500 nm and a resolution of 256 × 256 pixels. Hydrophilicity was evaluated by measuring the contact angle of the Au surfaces as measured with a contact angle meter (Kyowa Interface Science Co, Ltd., Saitama, Japan, PCA-11). Pure water (1.5 µL) was dropped on the Au surfaces, and the contact angle was calculated using the half-angle method. The electrical characteristics were evaluated by four-point measurement of the sheet resistance using a resistivity processor (NPS Inc., Tokyo, Japan, Model Σ) and Si wafers with Au thin film (thickness: 15 nm) and a Ti adhesion layer (thickness: 5 nm). The effect of the plasma treatment time was measured by irradiating plasma onto the same wafer several times. The surface chemical states were determined using X-ray photoelectron spectroscopy (XPS) analysis and thermal desorption spectrometry (TDS) analysis. The XPS analysis was performed using an X-ray photoelectron spectroscope (JEOL Ltd., Tokyo, Japan, JPS9200-T). A non-monochromatic Mg Kα source (photon energy: 1253.6 eV) was used at an operating power of 10 kV × 10 mA. Smoothing, Shirley-type background subtraction, and charge correction using the Au 4f7/2 binding energy were performed. The TDS analysis was performed using a thermal desorption spectrometer (ESCO Ltd., Tokyo, Japan, EMD-WA1000S). Thicker Au films (thickness: 300 nm) with Ti adhesion layers (thickness: 5 nm) deposited on thermally oxidized Si substrates were used to avoid the effect of diffusion from the adhesion layer or Si substrate during annealing. The temperature was increased at a rate of 30 °C/min and was corrected by measurement using a dummy Si substrate.
Four-inch Si wafers with Au thin film (thickness: 15 nm) and a Ti adhesion layer (thickness: 5 nm) were bonded after Ar or O2 plasma treatment in ambient air by overlapping two wafers and pinching the wafers together with tweezers. Bond front propagation was observed using an infrared (IR) transmission setup. The effects of plasma treatment time and air exposure time after plasma treatment on self-propagation of the bonding area and on bonding strength were investigated. The effects of annealing before bonding on the self-propagation of the bonding area and on bonding strength were also investigated by annealing wafers that had been plasma-treated up to 150 °C for 10 min in vacuum and then bonding them together in ambient air at room temperature.
Bonding strength was measured using destructive razor blade testing, also known as the crack opening or double cantilever beam method [27,28]. This testing method is an effective way to evaluate the energy of the bonded surfaces (i.e., surface energy). It is performed by inserting a razor blade between the bonded wafer pairs and observing the crack length along the bonded interface. The surface energy γ (J/m2) (i.e., half the bonding energy G) was calculated under plane strain conditions and the assumptions of beam theory using where E (Pa) is the Young’s modulus of the wafer, Tb (m) is the blade thickness, Tw (m) is the wafer thickness, and L (m) is the crack length [27]. In this experiment, Si substrates with a thickness of
525 μm and a blade with a thickness of 100 µm were used. For calculation, we assumed that Si is isotropic, with Young’s modulus of elasticity E = 169 GPa [29,30]. Although the measurement should be conducted using beam-shaped samples in order to accurately determine the surface energy [31], we used whole bonded wafer pairs because the fabrication of beam-shaped samples is particularly difficult for weakly bonded wafer pairs. The crack length along the bonded interface was observed with an IR camera in a standard clean room atmosphere. Since values obtained from Equation (1) are affected by the crack detection resolution, anisotropic mechanical properties, and humidity environment [28,30], the comparison of absolute energy values with published results requires careful consideration. 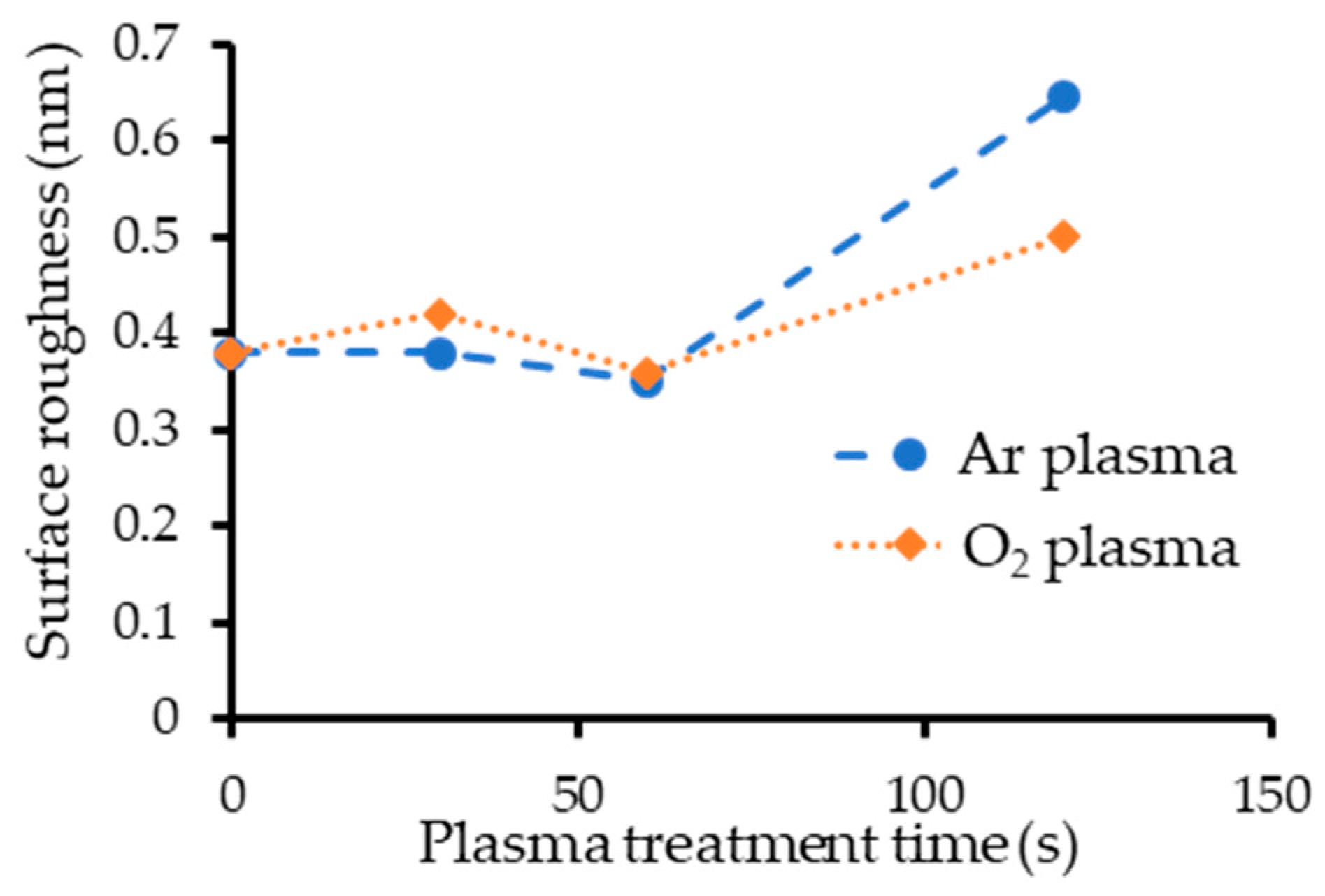 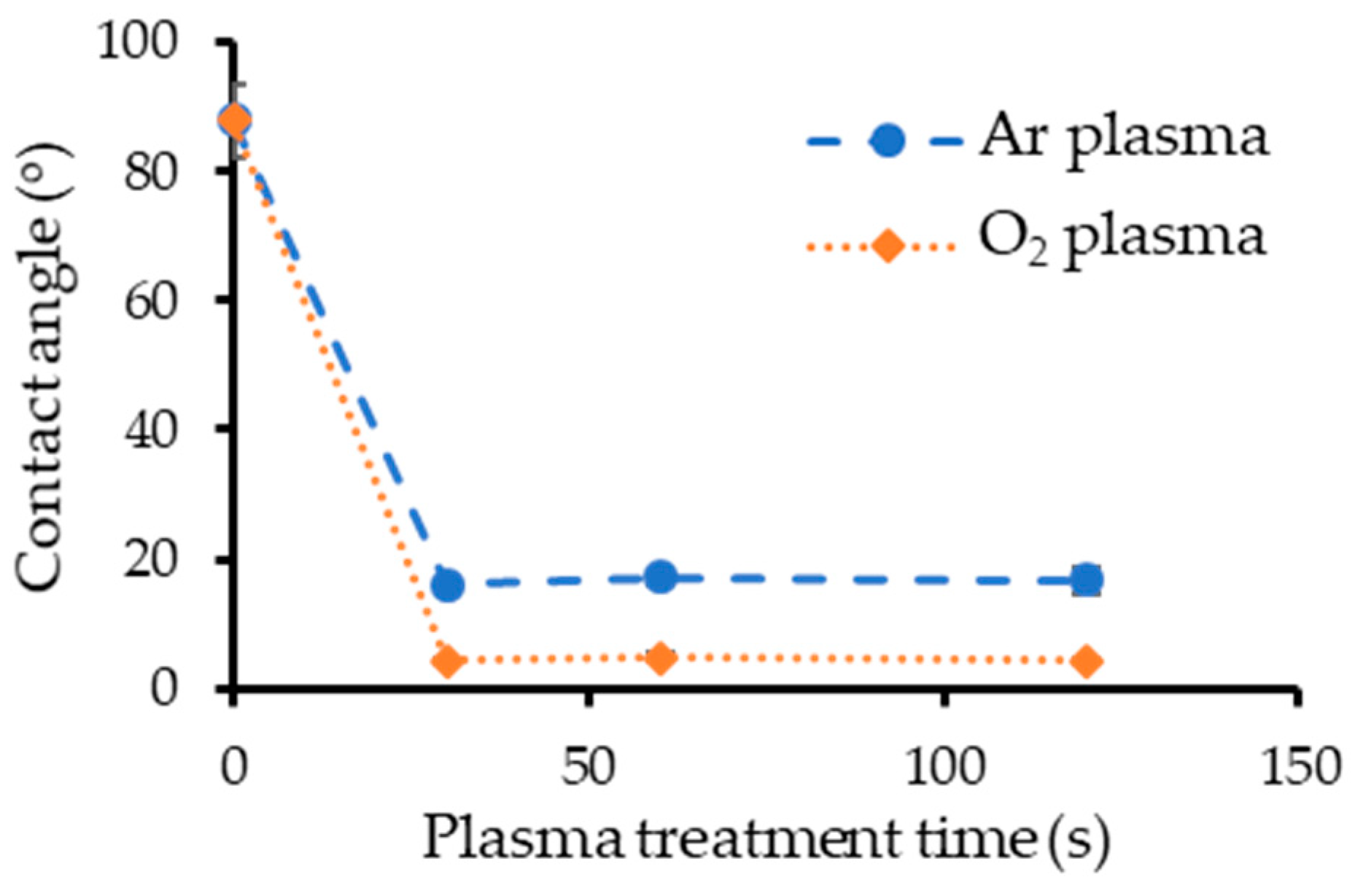 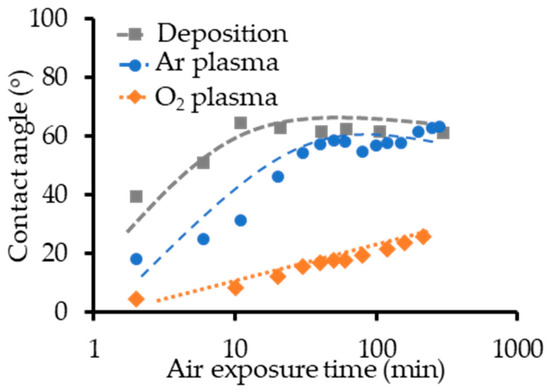 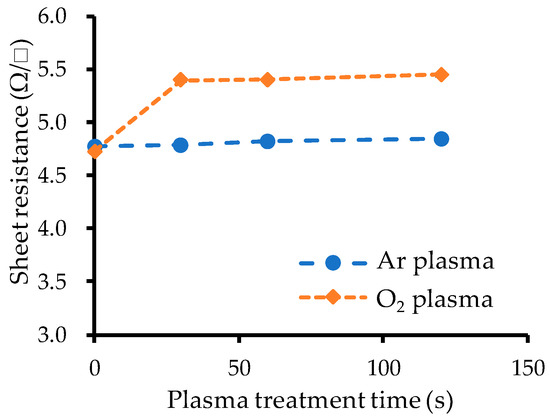 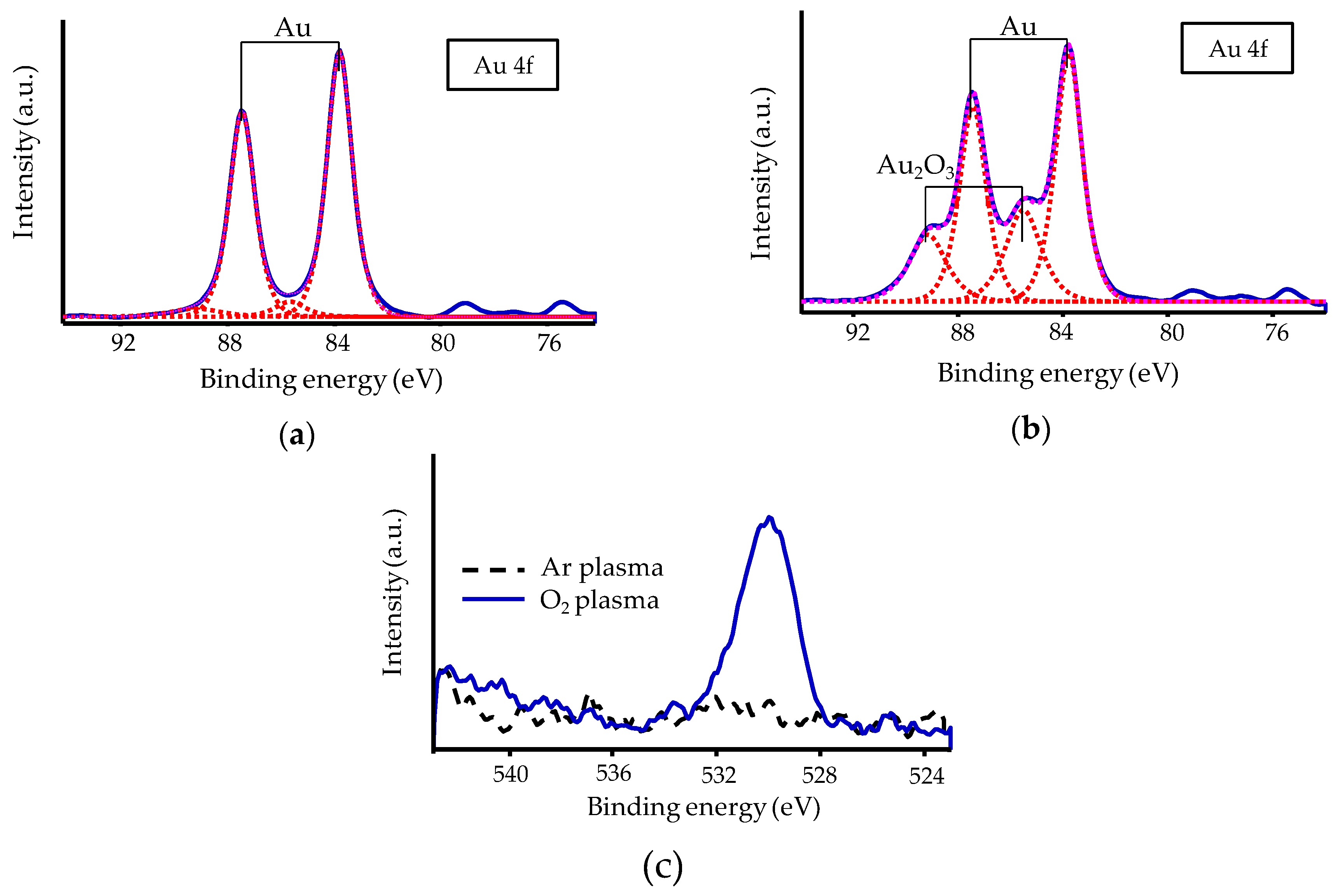 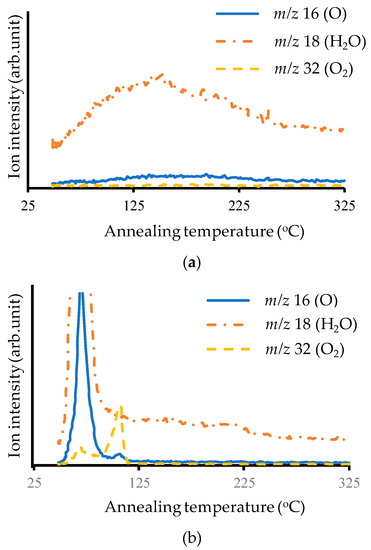