Effects of Harmful Algal Blooms on Fish and Shellfish Species: A Case Study of New Zealand in a Changing Environment
Previous Article in Journal

Previously, authors reported that individual volatile organic compounds (VOCs) emitted by non-aflatoxigenic Aspergillus flavus could act as a mechanism of biocontrol to significantly reduce aflatoxins and cyclopiazonic acid (CPA) produced by toxigenic strains. In this study, various combinations and volumes of three mycotoxin-reductive VOCs (2,3-dihydrofuran, 3-octanone and decane) were assessed for their cumulative impacts on four Aspergillus strains (LA1–LA4), which were then analyzed for changes in growth, as well as the production of mycotoxins, including aflatoxins, CPA and multiple indole diterpenes. Fungal growth remained minimally inhibited when exposed to various combinations of VOCs. No single combination was able to consistently, or completely, inhibit aflatoxin or CPA across all toxigenic strains tested. However, the combination of 2,3-dihydrofuran and 3-octanone offered the greatest overall reductions in aflatoxin and CPA production. Despite no elimination of their production, findings showed that combining VOCs produced solely by non-aflatoxigenic A. flavus still inhibited several agriculturally important mycotoxins, including B and G aflatoxins and CPA. Therefore, other VOC combinations are worth testing as post-harvest biocontrol treatments to ensure the prolonged effectiveness of pre-harvest biocontrol efforts. View Full-Text
Keywords: VOCs; biocontrol mechanism; aflatoxins; cyclopiazonic acid; indole diterpenes VOCs; biocontrol mechanism; aflatoxins; cyclopiazonic acid; indole diterpenes
►▼ Show Figures 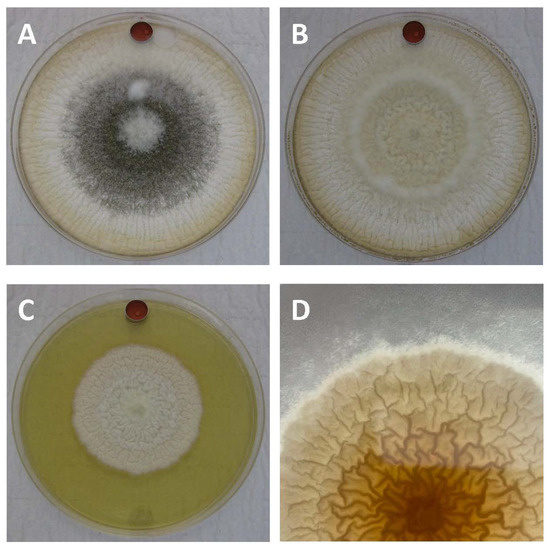