The Effect of Zearalenone on the Cytokine Environment, Oxidoreductive Balance and Metabolism in Porcine Ileal Peyer’s Patches

Bioactive Metabolites and Potential Mycotoxins Produced by Cordyceps Fungi: A Review of Safety

Ascomycete Cordyceps fungi such as C. militaris, C. cicadae, and C. guangdongensis have been mass produced on artificial media either as food supplements or health additives while the byproducts of culture substrates are largely used as animal feed. The safety concerns associated with the daily consumption of Cordyceps fungi or related products are still being debated. On the one hand, the known compounds from these fungi such as adenosine analogs cordycepin and pentostatin have demonstrated different beneficial or pharmaceutical activities but also dose-dependent cytotoxicities, neurological toxicities and or toxicological effects in humans and animals. On the other hand, the possibility of mycotoxin production by Cordyceps fungi has not been completely ruled out. In contrast to a few metabolites identified, an array of biosynthetic gene clusters (BGCs) are encoded in each genome of these fungi with the potential to produce a plethora of as yet unknown secondary metabolites. Conservation analysis of BGCs suggests that mycotoxin analogs of PR-toxin and trichothecenes might be produced by Cordyceps fungi. Future elucidation of the compounds produced by these functionally unknown BGCs, and in-depth assessments of metabolite bioactivity and chemical safety, will not only facilitate the safe use of Cordyceps fungi as human food or alternative medicine, but will also benefit the use of mass production byproducts as animal feed. To corroborate the long record of use as a traditional medicine, future efforts will also benefit the exploration of Cordyceps fungi for pharmaceutical purposes. View Full-Text
Keywords: Cordyceps fungi; mass production; mycotoxins; biosynthetic gene cluster; toxicity; safety Cordyceps fungi; mass production; mycotoxins; biosynthetic gene cluster; toxicity; safety
►▼ Show Figures 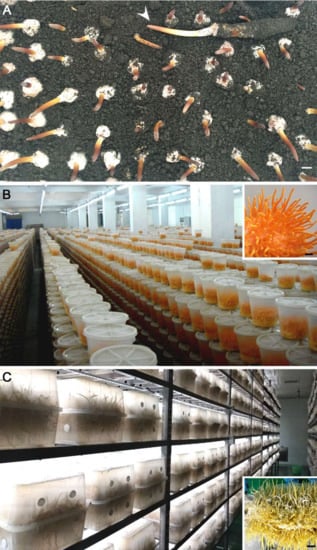