Zearalenone and Its Metabolites—General Overview, Occurrence, and Toxicity
Previous Article in Journal

The consumption of herbal-based supplements, which are believed to have beneficial effects on human health with no side effects, has become popular around the world and this trend is still increasing. Silybum marianum (L.) Gaertn, commonly known as milk thistle (MT), is the most commonly studied herb associated with the treatment of liver diseases. The hepatoprotective effects of active substances in silymarin, with silybin being the main compound, have been demonstrated in many studies. However, MT can be affected by toxigenic micro-fungi and contaminated by mycotoxins with adverse effects. The beneficial effect of silymarin can thus be reduced or totally antagonized by mycotoxins. MT has proven to be affected by micro-fungi of the Fusarium and Alternaria genera, in particular, and their mycotoxins. Alternariol-methyl-ether (AME), alternariol (AOH), beauvericin (BEA), deoxynivalenol (DON), enniatin A (ENNA), enniatin A1 (ENNA1), enniatin B (ENNB), enniatin B1 (ENNB1), HT-2 toxin (HT-2), T-2 toxin (T-2), tentoxin (TEN), and zearalenone (ZEA) seem to be most significant in MT-based dietary supplements. This review focuses on summarizing cases of mycotoxins in MT to emphasize the need for strict monitoring and regulation, as mycotoxins in relation with MT-based dietary supplements are not covered by European Union legislation. View Full-Text
Keywords: milk thistle; food supplements; liver diseases; silymarin; mycotoxins milk thistle; food supplements; liver diseases; silymarin; mycotoxins
►▼ Show Figures 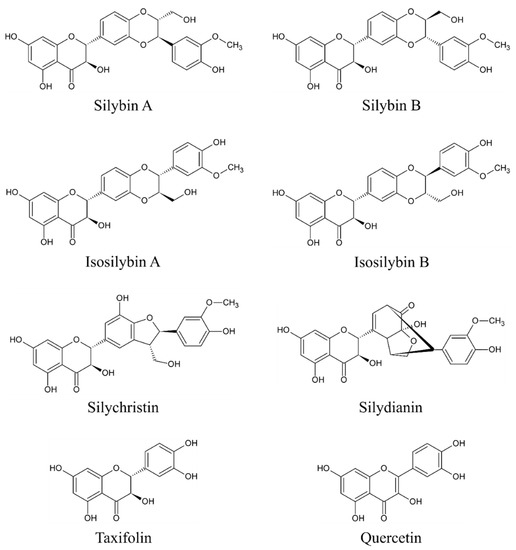