A Study of Carry-Over and Histopathological Effects after Chronic Dietary Intake of Citrinin in Pigs, Broiler Chickens and Laying Hens
Previous Article in Special Issue

Moulds produce a wide variety of primary and secondary metabolites, including mycotoxins. They comprise approximately 400 low-molecular-weight substances, which exhibit great structural diversity and thermal and chemical stability [1,2]. Mycotoxins are produced by more than 200 identified moulds, belonging primarily to the genera Aspergillus, Fusarium, and Penicillium [3,4,5].
The presence of mould secondary metabolites in food, beverages, and feed has been recognised as a potential threat to human and animal health. Acute and chronic diseases can arise, caused mainly by the direct contamination of plant materials or their products [4,6].
Currently, aflatoxins, trichothecenes, ochratoxin A (OTA), zearalenone (ZON), fumonisins, moniliformin, and patulin are the subject of a large number of studies, due to their frequent occurrence and their severe toxic effects [4,7].
The production of mycotoxins in food and feed depends on the substrate for fungal growth, as well as ecological and environmental factors such as temperature and relative humidity. The conditions of storage and the use of fungicides to prevent/limit the growth of fungi are also very important. The interrelations between all mentioned factors, however, are not yet well understood, and production of mycotoxins cannot reasonably be predicted [4].
Among the methods of analysing mycotoxins in food and agricultural products, the most popular are immunochemical-based and chromatographic-based [5,6]. The combination of liquid chromatography with tandem mass spectrometry (MS/MS) allowed the development of highly selective, sensitive, and accurate methods for the determination of mycotoxin. Currently, the best methods seem to be LC–MS/MS-based multi-mycotoxin methods. This method works well, without the need for complicated and time consuming clean-ups and/or multiple analytical techniques [1,2,8,9]. Multi-mycotoxin methods have been described and validated for a wide range of agricultural products, including fruit, cereals, spices, oil seed, and many others [8,10,11].
The disadvantage of all currently available methods of mycotoxin analysis is the inability to assess the spatial distribution of mycotoxins in the tested material. Many authors have pointed out the problems of spatial variability and heterogeneous distribution of mycotoxin contaminations (resulting from a very small proportion of contaminated grains or kernels containing high mycotoxin concentrations) in the bulk of agricultural products [12,13]. Some studies use statistics including Moran’s I, SADIE, Mantel’s tests, the dispersion index, and geostatistical analysis to describe the distributions of fungus/mycotoxin contamination of different bulk commodities [13,14,15]. Despite the fact, however, that the problem of cereal contamination with mycotoxins has been the subject of numerous studies since 1960, no method has yet been developed that assesses the distribution of mycotoxins on the surface of grains, or other plant material, and the depth of their penetration into the interior.
Mass spectrometry imaging (MSI) is a tool that can assist in the determination of the spatial distribution of mycotoxins on tissues of plant origin. MSI has been used for the visualization and analysis of molecules, over a relatively wide range of molecular weight, in complicated biological systems, and with exceptionally good molecular specificity [16]. Notably, so far MSI has been used only in the non-targeted mode, using full mass scanning MS1 spectrum mode [17].
Matrix-assisted laser desorption/ionisation (MALDI) is the selected technique for the molecular imaging of samples of biological tissue. MALDI MSI has been used with success to analyse the spatial distribution of compounds, including proteins and lipids, within different tissues [18,19]. MALDI, however, suffers from a high background level in the low-mass region (under m/z 1000), the sweet spot effect, and low ionisation efficiency for low-polarity compounds. These limitations are overcome by matrix-free, laser desorption–ionisation methods, such as surface-assisted laser desorption ionisation (SALDI), including the 109AgNPET LDI method [20,21]. Unfortunately, both the MALDI and SALDI methods are based on commercial high-vacuum instruments, which is problematic for many imaged objects, as they lose water and may warp and/or crack during measurements. Additionally, commercial instruments do not provide any kind of metabolite-protecting, tissue-freezing solutions.
Desorption electrospray ionisation (DESI) is the only ambient ionisation technique that has been developed for the imaging of low-molecular-weight compounds in human tissue [22,23,24]. However, this technique is characterized by a relatively low (to 100 μm) spatial resolution. Likewise, it has a low ionisation efficiency for some molecules, as well as low desorption efficiency for molecules that are strongly bound to surfaces [25]. In addition, the DESI depth of sampling is very shallow, which significantly reduces the amount of sample available for testing in the mass spectrometer. As a result, MS signals can be obtained from extracellular fluids instead of the cell’s interior.
In order to overcome these problems, a custom experimental setup, LARESI MSI, was developed [26]. This solution employs a mid-IR laser, a cooling stage, and a tandem SRM/MRM-based measurement mode. In tandem mass spectrometry (MS/MS or MS2), the selectivity for a targeted analyte is enhanced by monitoring an ion fragmentation in selected reaction monitoring (SRM) or multiple reaction monitoring (MRM) mode, which dramatically improves sensitivity despite the lower ion detection efficiency. Moreover, it has a wide dynamic range, is very high speed, and is suitable for quantification [27].
The aim of the study was to assess the spatial distribution of grain metabolites and secondary metabolites of Aspergillus fumigatus mould under model conditions on an agar medium and spelt grain, using laser ablation-remote-electrospray ionisation mass spectrometry imaging (LARESI MSI) in selected reaction monitoring mode (SRM).

The presented studies prove the effectiveness of LARESI mass spectrometry imaging in the analysis of the spatial distribution of mycotoxins on the surface of plant material. The biggest advantage of the presented methods is that samples were not modified in any way before the tests, which can be carried out in situ.
The varying distribution of metabolites in spelt grain was demonstrated. Fumigaclavine C, fumitremorgin C, and fumiquinazoline D were located primarily in the embryo, brevianamide F in the seed coat, and fumagillin in the endosperm. The LARESI MSI method can be used in the future for the metabolomic analysis of various plants and agricultural products.

Aspergillus fumigatus LOCK CPC 0600 (ITS gene sequences deposited in the National Center for Biotechnology Information GenBank database with no. KC456184) with confirmed toxinogenicity in earlier studies [28] was obtained from the Collection of Pure Culture at the Institute of Fermentation Technology and Microbiology at Lodz University of Technology (LOCK CPC).
The A. fumigatus strain was grown on a Petri dish with PDA medium (Potato Dextrose Agar, BTL, Warszawa, Poland) for 10 days at 25 ± 2 °C. Mould cultures on agar medium were used as inoculum for grain infection and were also tested using LARESI SRM MSI.

Spelt is gaining popularity as an alternative to wheat because it is ecological and more favourable to human health. Therefore, its grains were selected for research. Commercially available grains of spelt (Melvit, Warszawa, Poland) were used in the study. Ten grams of spelt in 10 mL aqueous glucose solution (glucose 38 g/L) was placed in glass bottles of 100 mL. The grains were allowed to stand at room temperature for 3 days to swell. Then, the samples were autoclaved (15 min, 121 °C), cooled down, and inoculated with 5 mL of spore suspension. Spore suspensions were prepared by adding 10 mL of sterile water (with 0.05% Tween 80) to the agar plate culture of A. fumigatus. The number of spores was determined using a Thom cell chamber and confirmed by the culture method. Afterwards, the spore suspensions were diluted to the 106 spores/mL concentration.
The grain cultures were grown in the dark at 25 ± 2 °C for 14 days.

Sections of 200 µm thick spelt grain infected by A. fumigatus were cut using a cryotome, and the slices (Figure 2, top-left) were mounted on a Peltier stage set to −18 °C to minimise the lateral mixing of compounds in the sample surface. The experiment was performed in a 5.5 × 8.5 mm ablation raster. The resolution used was 35 × 54 pixels, equal to 157 µm X and Y resolution.
For experiments presented in this work, an Nd/YAG-pumped, OPO laser (IR Opolette 2731-HE; Opotek, Carlsbad, CA, USA) producing 4–5 ns pulses with a repetition frequency of 20 Hz set at 2.94 μm wavelength was used. The pulse energy at laser exit aperture was 3.5 mJ (measured using energy meter PE25-SH-V2; Ophir-Spiricon, Logan, UT, USA). The MSI experiments were performed in an airtight PMMA chamber, as shown in Nizioł et al. (2020) [26]. The chamber was pressurized with nitrogen to produce a 2 L/min gas stream entering and leaving the chamber. The sample was placed on a 50 × 50 mm sample stage built on a Peltier cooling plate providing temperature of –18 °C. The sample stage was mounted on a motorised XY-stage (MTS50-Z8; Thorlabs, Newton, NJ, USA). The laser pulses from the OPO laser entered the sample chamber through a 1 inch Infrasil window (Thorlabs, Newton, NJ, USA) and were reflected towards the sample stage by a gold-plated mirror (Thorlabs, Sweden). The beam was focused onto the sample using a 40 mm focal length CaF2 spherical lens (Thorlabs, Sweden), mounted on a Z-axis stage (Thorlabs, Sweden). The laser focus size was 60 ± 10 μm, and the pulse energy measured at the sample surface was approximately 2 mJ. A funnel-type device [26] connected to a 4 mm I.D./6 mm O.D. PTFE tube was positioned over the laser ablation site, allowing laser ablation plume to be transported to the electrospray ionisation (ESI) source of the SCIEX QTRAP 5500 mass spectrometer. An HPLC pump (Agilent G1312A) pumped solvent mixture 2:1 IPA:water with 0.5% acetic acid at 50 μL/min to the electrospray needle. Each pixel was exposed to the laser for 2 s, at a laser pulse repetition rate of 15 Hz. The control and analysis software was described recently [26]. 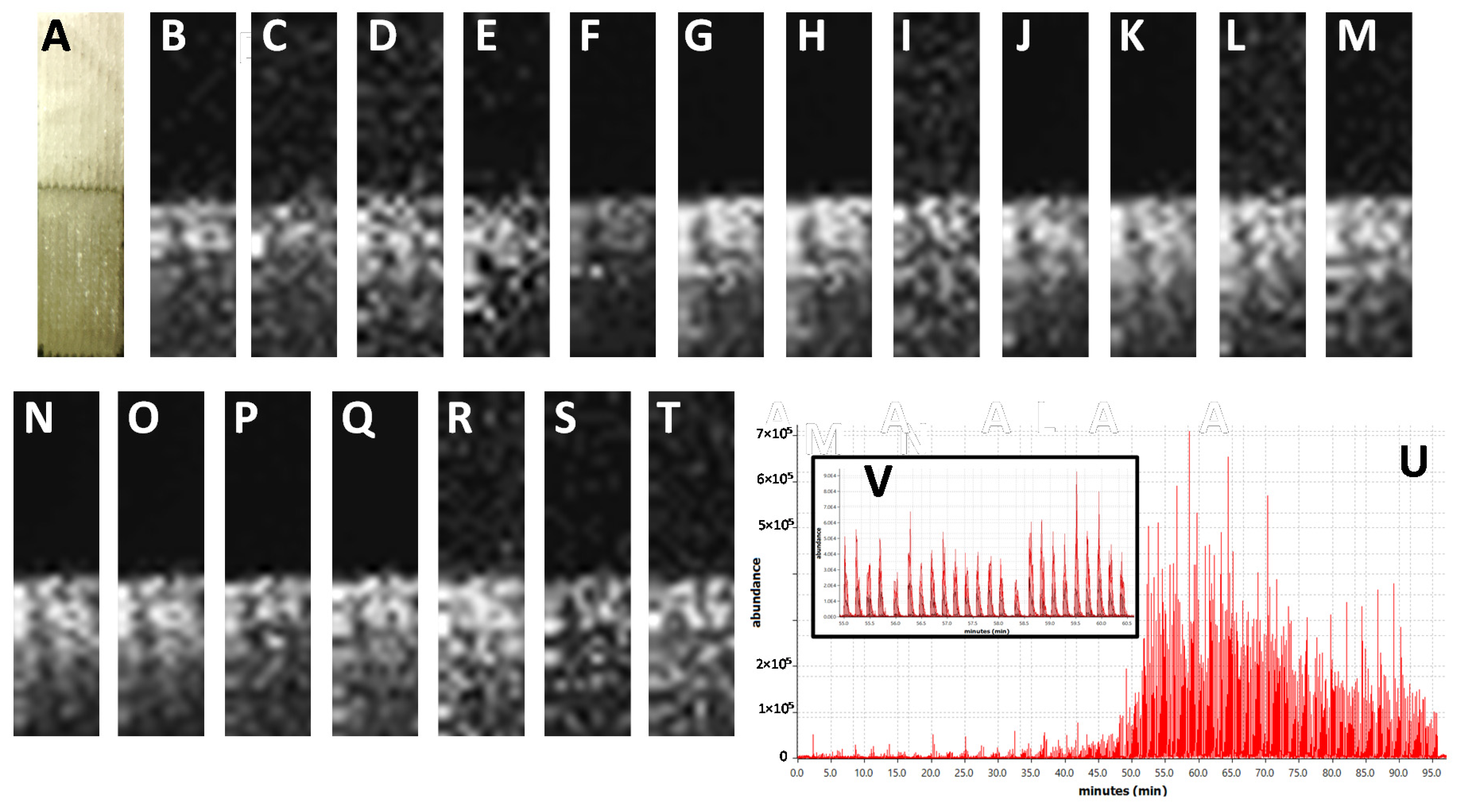