Development of PCR, LAMP and qPCR Assays for the Detection of Aflatoxigenic Strains of Aspergillus flavus and A. parasiticus in Hazelnut
Next Article in Special Issue

Aflatoxin B1 and Sterigmatocystin Binding Potential of Lactobacilli

Due to global climate change, mould strains causing problems with their mycotoxin production in the tropical–subtropical climate zone have also appeared in countries belonging to the temperate zone. Biodetoxification of crops and raw materials for food and feed industries including the aflatoxin B1 (AFB1) binding abilities of lactobacilli is of growing interest. Despite the massive quantities of papers dealing with AFB1-binding of lactobacilli, there are no data for microbial binding of the structurally similar mycotoxin sterigmatocystin (ST). In addition, previous works focused on the detection of AFB1 in extracts, while in this case, analytical determination was necessary for the microbial biomass as well. To test binding capacities, a rapid instrumental analytical method using high-performance liquid chromatography was developed and applied for measurement of AFB1 and ST in the biomass of the cultured bacteria and its supernatant, containing the mycotoxin fraction bound by the bacteria and the fraction that remained unbound, respectively. For our AFB1 and ST adsorption studies, 80 strains of the genus Lactobacillus were selected. Broths containing 0.2 µg/mL AFB1and ST were inoculated with the Lactobacillus test strains. Before screening the strains for binding capacities, optimisation of the experiment parameters was carried out. Mycotoxin binding was detectable from a germ count of 107 cells/mL. By studying the incubation time of the cells with the mycotoxins needed for mycotoxin-binding, co-incubation for 10 min was found sufficient. The presence of mycotoxins did not affect the growth of bacterial strains. Three strains of L. plantarum had the best AFB1 adsorption capacities, binding nearly 10% of the mycotoxin present, and in the case of ST, the degree of binding was over 20%. View Full-Text
Keywords: aflatoxin B1; sterigmatocystin; lactobacilli; mycotoxin binding; detoxification aflatoxin B1; sterigmatocystin; lactobacilli; mycotoxin binding; detoxification
►▼ Show Figures 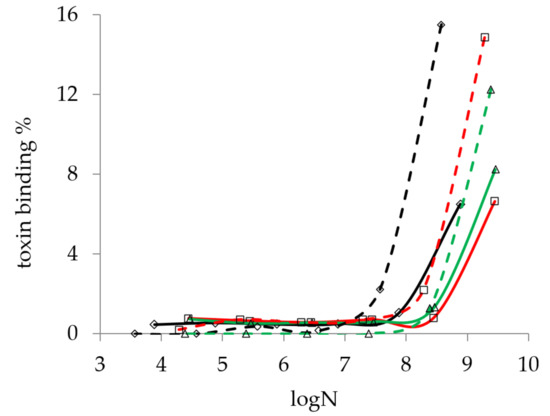