The aim of this study was to investigate the effects of deoxynivalenol (DON) exposure on the inflammatory injury nuclear factor kappa-B (NF-κB) pathway in intestinal epithelial cells (IPEC-J2 cells) of pig. The different concentrations of DON (0, 125, 250, 500, 1000, 2000 ng/mL) were added to the culture solution for treatment. The NF-κB pathway inhibitor pyrrolidine dithiocarbamate (PDTC) was used as a reference. The results showed that when the DON concentration increased, the cell density decreased and seemed damaged. With the increase of DON concentration in the culture medium, the action of diamine oxidase (DAO) in the culture supernatant also increased. The activities of IL-6, TNF-α, and NO in the cells were increased with the increasing DON concentration. The relative mRNA expression of IL-1β and IL-6 were increased in the cells. The mRNA relative expression of NF-κB p65, IKKα, and IKKβ were upregulated with the increasing of DON concentration, while the relative expression of IκB-α mRNA was downregulated. At the same time, the expression of NF-κB p65 protein increased gradually in the cytoplasm and nucleus with a higher concentration of DON. These results showed that DON could change the morphology of IPEC-J2 cells, destroy its submicroscopic structure, and enhance the permeability of cell membrane, as well as upregulate the transcription of some inflammatory factors and change the expression of NF-κB-related gene or protein in cells. View Full-Text
Keywords: deoxynivalenol; IPEC-J2; cell damage; NF-κB inflammatory signal pathway deoxynivalenol; IPEC-J2; cell damage; NF-κB inflammatory signal pathway
►▼ Show Figures 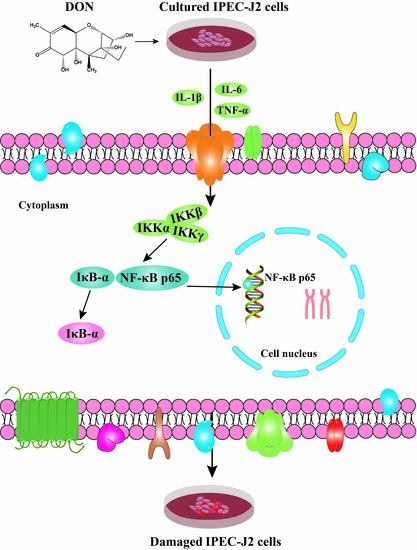