Food and feed can be naturally contaminated by several mycotoxins, and concern about the hazard of exposure to mycotoxin mixtures is increasing. In this study, more than 800 metabolites were analyzed in 524 finished pig feed samples collected worldwide. Eighty-eight percent of the samples were co-contaminated with deoxynivalenol (DON) and other regulated/emerging mycotoxins. The Top 60 emerging/regulated mycotoxins co-occurring with DON in pig feed shows that 48%, 13%, 8% and 12% are produced by Fusarium, Aspergillus, Penicillium and Alternaria species, respectively. Then, the individual and combined toxicity of DON and the 10 most prevalent emerging mycotoxins (brevianamide F, cyclo-(L-Pro-L-Tyr), tryptophol, enniatins A1, B, B1, emodin, aurofusarin, beauvericin and apicidin) was measured at three ratios corresponding to pig feed contamination. Toxicity was assessed by measuring the viability of intestinal porcine epithelial cells, IPEC-1, at 48-h. BRV-F, Cyclo and TRPT did not alter cell viability. The other metabolites were ranked in the following order of toxicity: apicidin > enniatin A1 > DON > beauvericin > enniatin B > enniatin B1 > emodin > aurofusarin. In most of the mixtures, combined toxicity was similar to the toxicity of DON alone. In terms of pig health, these results demonstrate that the co-occurrence of emerging mycotoxins that we tested with DON does not exacerbate toxicity. View Full-Text
Keywords: global survey; finished pig feed; co-occurrence; emerging mycotoxins; DON; toxicity; combined toxicity; IPEC-1 global survey; finished pig feed; co-occurrence; emerging mycotoxins; DON; toxicity; combined toxicity; IPEC-1
►▼ Show Figures 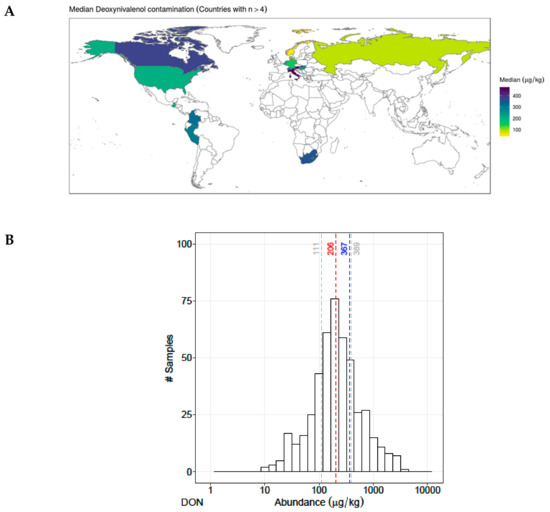