The study applied a targeted metabolomics approach that uses a direct injection and tandem mass spectrometry (DI–MS/MS) coupled with a liquid chromatography–tandem mass spectrometry (LC–MS/MS)-based metabolomics of plasma to evaluate the effects of supplementing clay with or without Saccharomyces cerevisiae fermentation product (SCFP) on the metabolic status of dairy cows challenged with aflatoxin B1. Eight healthy, lactating, multiparous Holstein cows in early lactation (64 ± 11 DIM) were randomly assigned to one of four treatments in a balanced 4 × 4 duplicated Latin square design with four 33 d periods. Treatments were control, toxin (T; 1725 µg aflatoxin B1 (AFB1)/head/day), T with clay (CL; 200 g/head/day), and CL with SCFP (YEA; 35 g of SCFP/head/day). Cows in T, CL, and YEA were dosed with aflatoxin B1 (AFB1) from days 26 to 30. The sequestering agents were top-dressed from day 1 to 33. On day 30 of each period, 15 mL of blood was taken from the coccygeal vessels and plasma samples were obtained from blood by centrifugation and analyzed for metabolites using a kit that combines DI–MS/MS with LC–MS/MS-based metabolomics. The data were analyzed using the GLIMMIX procedure of SAS. The model included the effects of treatment, period, and random effects of cow and square. Significance was declared at p ≤ 0.05. Biomarker profiles for aflatoxin ingestion in dairy cows fed no sequestering agents were determined using receiver–operator characteristic (ROC) curves, as calculated by the ROCCET web server. A total of 127 metabolites such as amino acids, biogenic amines, acylcarnitines, glycerophospholipids, and organic acids were quantified. Compared with the control, T decreased (p < 0.05) plasma concentrations of alanine, leucine, and arginine and tended to decrease that of citrulline. Treatment with CL had no effects on any of the metabolites relative to the control but increased (p ≤ 0.05) concentrations of alanine, leucine, arginine, and that of citrulline (p = 0.07) relative to T. Treatment with YEA resulted in greater (p ≤ 0.05) concentrations of aspartic acid and lysine relative to the control and the highest (p ≤ 0.05) plasma concentrations of alanine, valine, proline, threonine, leucine, isoleucine, glutamic acid, phenylalanine, and arginine compared with other treatments. The results of ROC analysis between C and T groups revealed that the combination of arginine, alanine, methylhistidine, and citrulline had sufficient specificity and sensitivity (area under the curve = 0.986) to be excellent potential biomarkers of aflatoxin ingestion in dairy cows fed no sequestering agents. This study confirmed the protective effects of sequestering agents in dairy cows challenged with aflatoxin B1.
Keywords: aflatoxin; biomarker; dairy cows aflatoxin; biomarker; dairy cows

Fungal spoilage of livestock feeds continues to be a major problem for feed security because of reduced palatability and loss of nutritive value [1,2]. Worse still, the affected commodity may be contaminated with toxic fungal secondary metabolites such as mycotoxins [3]. Aflatoxin B1 is the most studied among the fungal secondary metabolites because it is carcinogenic and poses a serious public health issue due to its transfer from diet to animal products such as milk, meat, and eggs [4,5]. Consequently, most studies have focused on the use of sequestering agents such as clay and Saccharomyces cerevisiae-based additives to counteract the negative effects of aflatoxin on performance and reduce its transfer to animal products [6]. Most of these studies have evaluated the effects of aflatoxins with or without sequestering agents on the metabolic status of ruminants using few biochemical parameters such as plasma liver enzymes and blood cell counts [6,7], which offer very little in terms of metabolic inferences [8]. A comprehensive analysis of the metabolic profile of animals to aflatoxin exposure is needed to reveal a robust metabolic inference and identify biomarkers of aflatoxin ingestion, which may allow early detection of aflatoxicosis, poisoning caused by ingesting aflatoxins, in livestock.
In recent years, metabolomics has been extensively used in basic and applied research to study metabolic processes and identify biomarkers responsible for metabolic characteristics [9]. Metabolomics can reveal the metabolic response of a biological system to several factors including stress, environmental alterations, and dietary change [10,11]. Previously, our group applied high-resolution proton nuclear magnetic resonance spectroscopy (1H NMR)-based metabolomics of plasma to identify plasma metabolites such as acetic acid, arginine, ethanol, alanine, methylhistidine, and proline as biomarkers of aflatoxin ingestion in dairy cows fed no sequestering agents [12]. However, liquid chromatography coupled to tandem mass spectrometry (LC–MS/MS) offers several advantages including high sensitivity and specificity and the potential to analyze disease-associated metabolic changes and quantify hundreds of metabolites in one run [13,14]. Thus, the objective of this study was to evaluate the effects of supplementing clay with or without Saccharomyces cerevisiae fermentation product (SCFP) on the plasma metabolomics profile of dairy cows challenged with aflatoxin B1 using a combination of direct injection and tandem mass spectrometry (DI–MS/MS) with a reverse-phase LC–MS/MS.

This study was part of a larger project designed to evaluate the effects of supplementing clay with or without SCFP on health and performance of dairy cows challenged with AFB1 [6]. The University of Florida Institutional Animal Care and Use Committee approved all experimental procedures used in this study. Details about cows and feeding have been reported previously [6,12]. Briefly, eight lactating multiparous Holstein cows (64 ± 11 days in milk) were randomly assigned to one of four treatment sequences in a balanced 4 × 4 Latin square design with two replicate squares, four 33 day periods, and a 5 day washout interval between periods. Treatments were (1) control (diet with no additives), (2) toxin (T; basal diet + 1725 µg of AFB1/head per day), (3) toxin with bentonite clay (CL; 200 g/head per day; Astra-Ben-20, Prince Agri Products Inc., Quincy, IL, USA), and (4) CL plus SCFP (YEA; 35 g of SCFP/head per day; Diamond V, Cedar Rapids, IA, USA). The basal diet was formulated and fed as a total mixed ration (TMR), to meet the nutrient requirements of dairy cows producing 30 kg/d or more of milk [30]. The basal diet contained 55.6% concentrate mix, 36.1% corn silage, and 8.3% alfalfa hay on a dry matter basis. Oral dose of 1725 µg of AFB1 was administered to each cow in treatments T, CL, and YEA from days 26 to 30 before the morning feeding to give a dietary concentration of 75 µg/kg based on estimated daily DMI of 23 kg/d. The sequestering agents were top-dressed on the respective TMR from days 1 to 33 of each period. Blood samples (15 mL) were obtained from the coccygeal vessels into vacutainer tubes containing sodium heparin anticoagulant before the morning feeding on day 30 of each experimental period. Plasma samples were prepared from the blood by centrifugation at 2500× g for 20 min at 4 °C, initially stored at −20 °C and then at −80 °C until LC-MS/MS analysis was done.
Plasma samples (20 µL) were analyzed using a commercial kit that uses direct injection and tandem mass spectrometry (DI–MS/MS) coupled with a reverse-phase liquid chromatography and tandem mass spectrometry (LC–MS/MS). The kit assay (AbsoluteIDQ p180; Biocrates Life Sci., Innsbruck, Austria), used with an ABI 4000 Q-Trap mass spectrometer (Applied Biosystems/MDS Sciex, Foster City, CA, USA), enables the quantification of 145 metabolites in as little of 10 µL of biofluid. Detailed information and description of the method has been reported elsewhere [14,31]. Mass spectrometric analysis was performed using an API4000 Qtrap® tandem mass spectrometry instrument (Applied Biosystems/MDS Analytical Technologies, Foster City, CA, USA) that is equipped with a solvent delivery system. Delivery of the samples to the mass spectrometer was done using an LC method, followed by a DI method.

Metabolite data were subjected to multivariate analysis using Metaboanalyst 4.0 software (www.metaboanalyst.ca) [24]. Prior to multivariate analysis, data were log-transformed and pareto-scaled. Partial least squares discriminant analysis (PLS-DA) was used to visualize differences between the control group and each of T, CL, and YEA groups. Based on the PLS-DA model, the metabolites that were important in discriminating cows in T, CL, and YEA from control group were ranked using variable importance in projection (VIP). Metabolites with VIP values ≥1 were considered powerful group discriminators [32]. Metabolites with VIP values ≥1 were analyzed using the GLIMMIX procedure of SAS version 9.4 (SAS Institute Inc., Cary, NC, USA, 2013). The model used for the analysis included the fixed effects of treatment, period, and random effects of cow and square, and their interactions. Significance was declared at p ≤ 0.05, and tendency was declared at 0.10 ≥ p > 0.05. Biomarker profiles for aflatoxin ingestion in dairy cows fed no sequestering agents were determined using receiver–operator characteristic (ROC) curves, as calculated by the ROCCET web server [25]. Area under the curve (AUC), a value that combines sensitivity and specificity for a diagnostic test, was used to evaluate the utility of the biomarkers [25].

We gratefully acknowledge Diamond V Inc. (Cedar Rapids, IA) for funding the animal experiment. Cost of plasma metabolomics analysis was supported by funds from the US Department of Agriculture’s National Institute of Food and Agriculture Evans-Allen project. 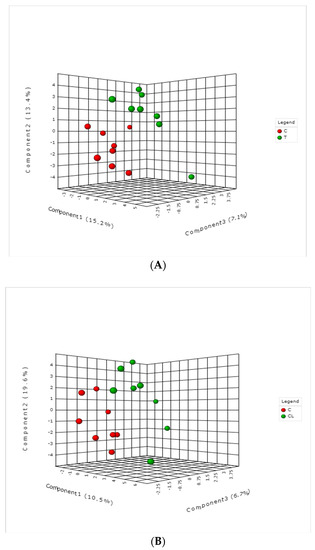 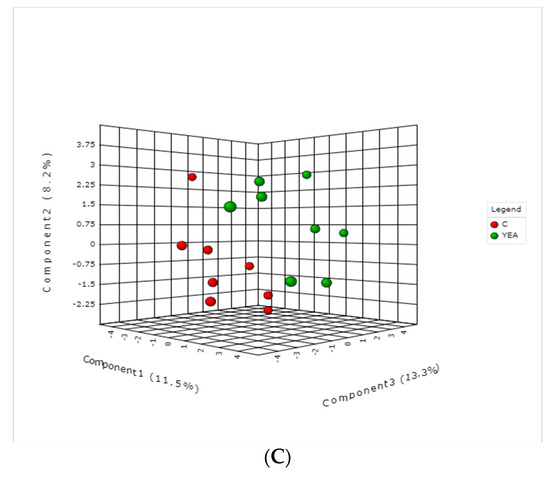 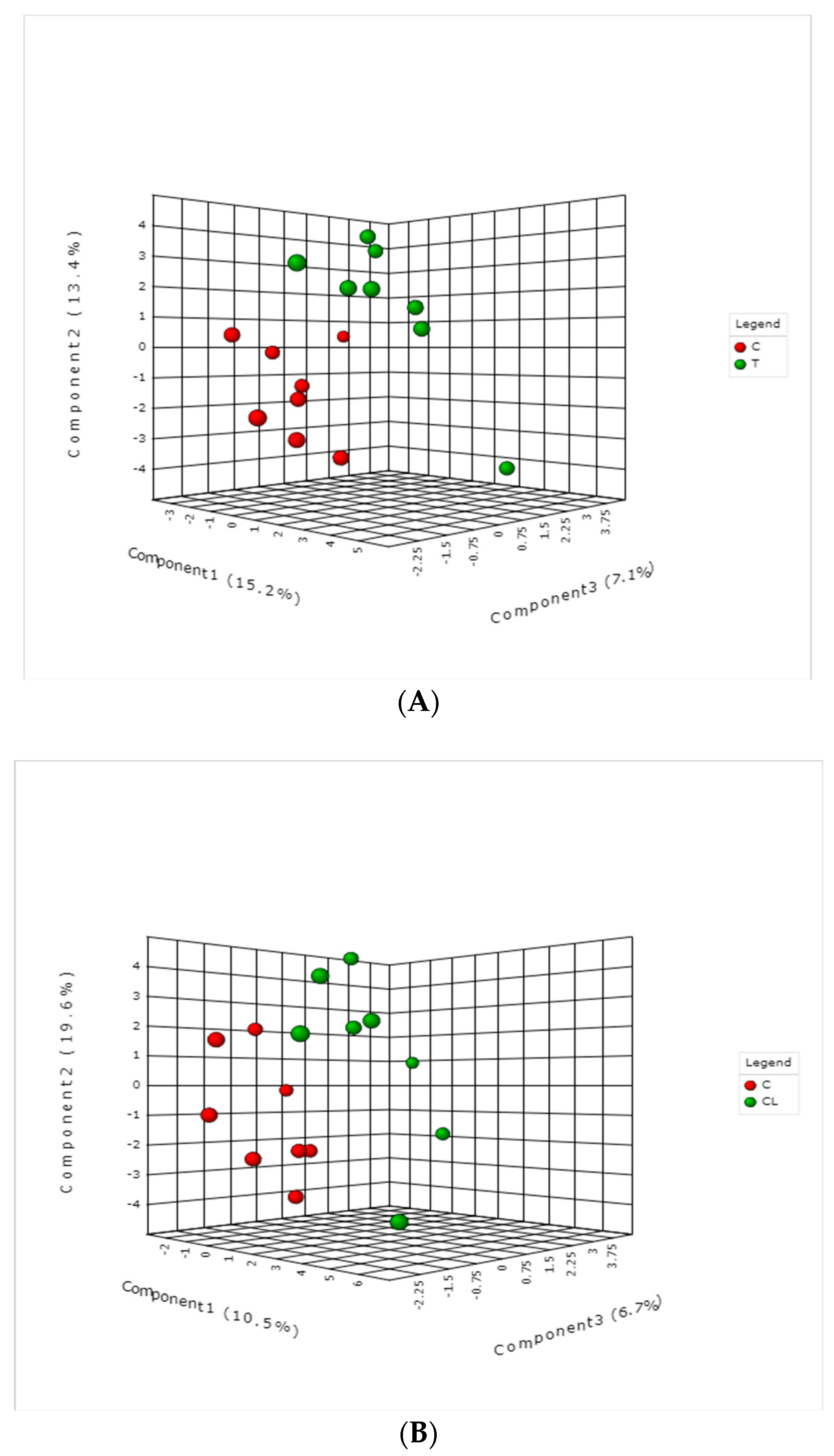 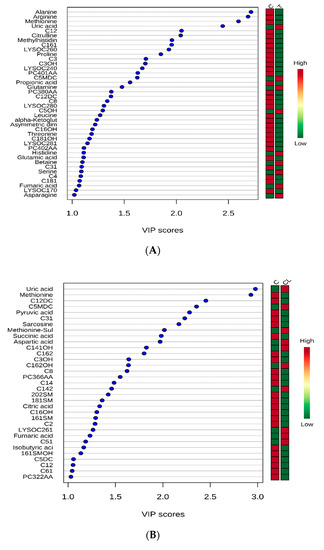 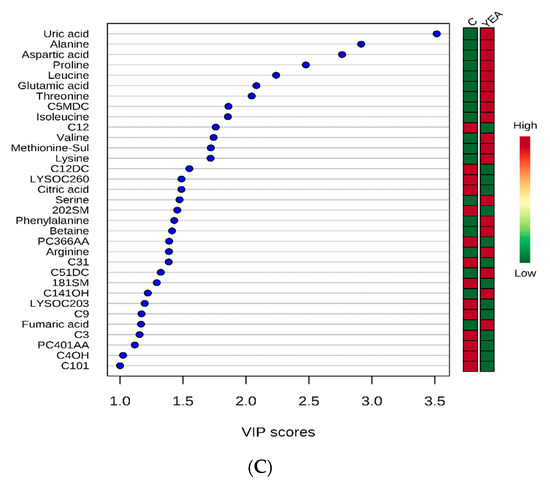 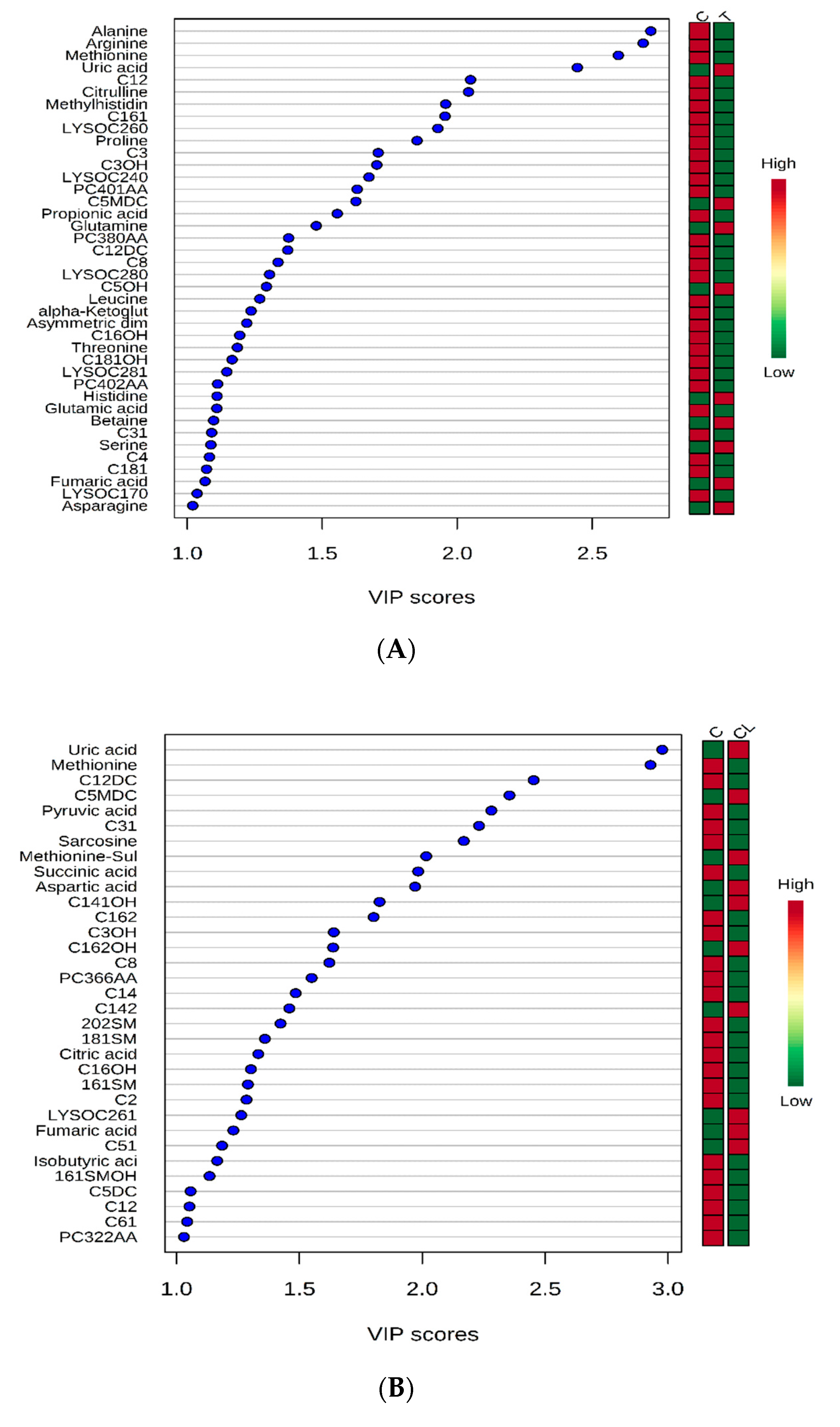 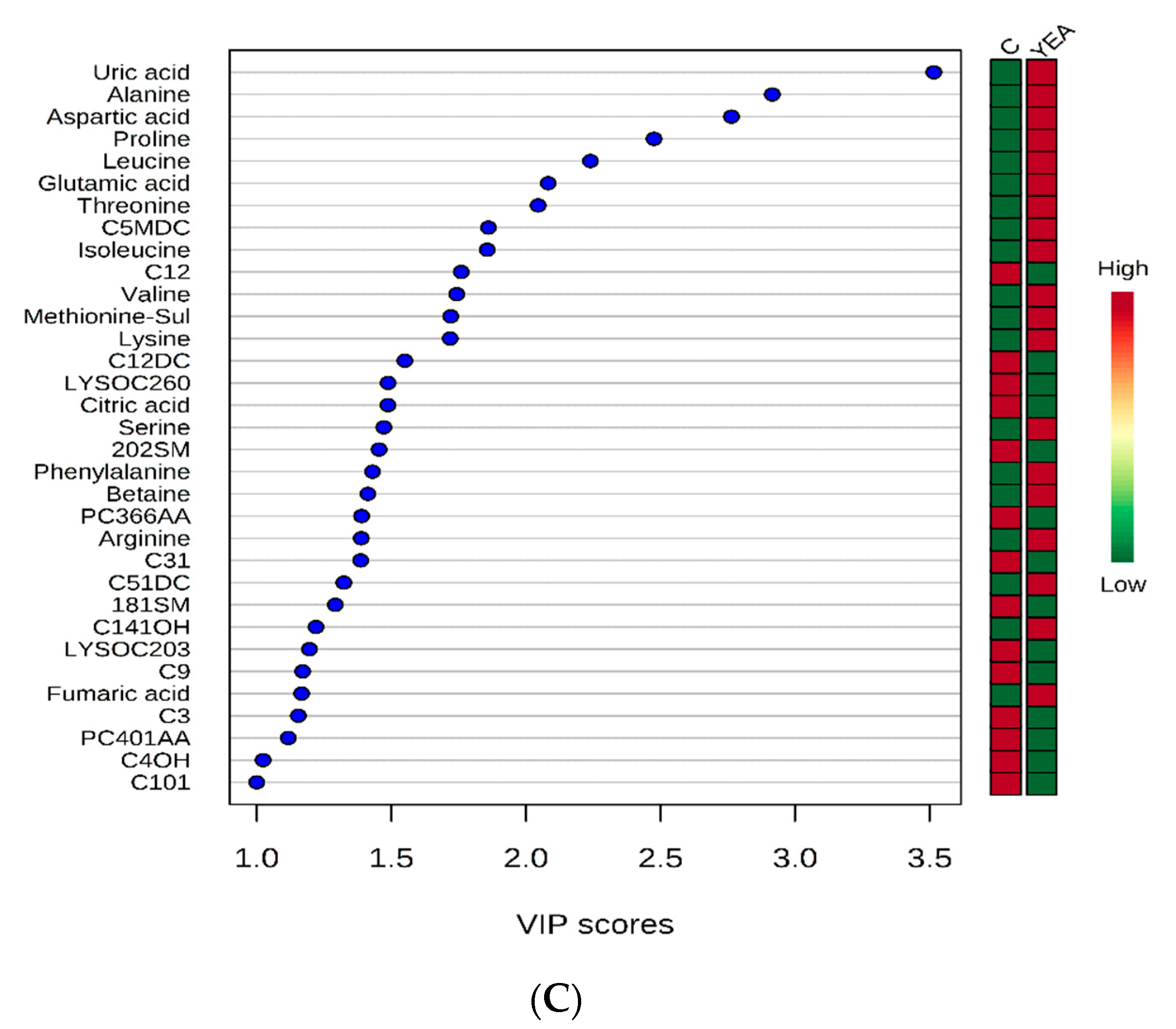 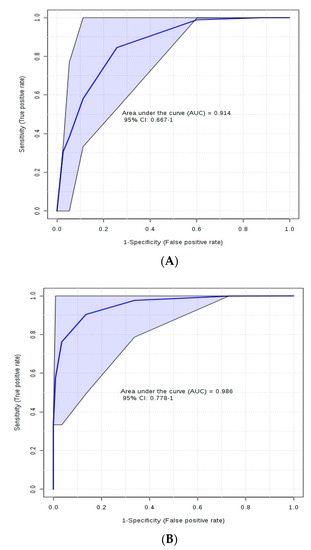 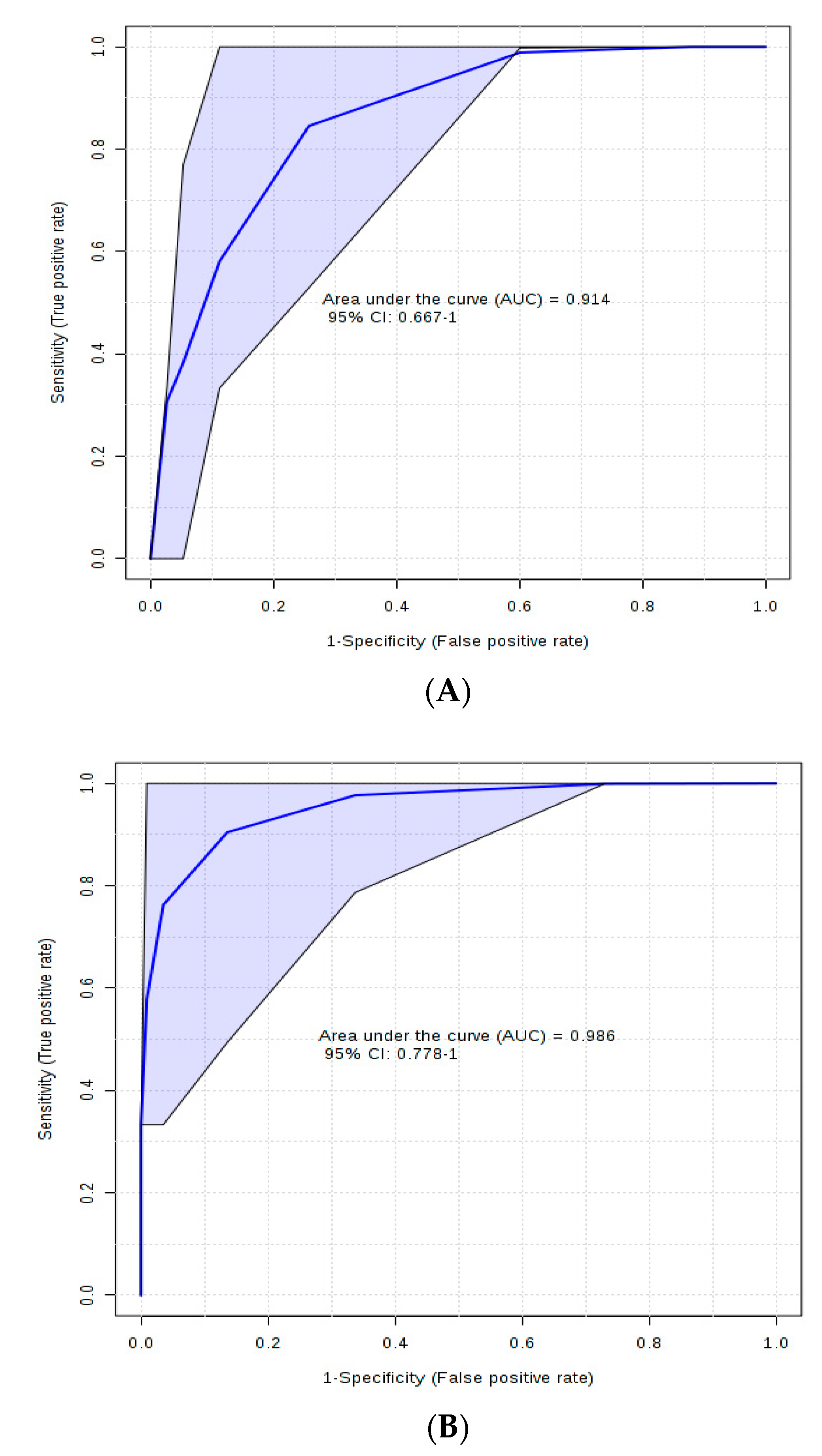