Hemolysis Derived Products Toxicity and Endothelium: Model of the Second Hit
Next Article in Special Issue

Contamination of animal feed with multiple mycotoxins is an ongoing and growing issue, as over 60% of cereal crops worldwide have been shown to be contaminated with mycotoxins. The present study was carried out to assess the efficacy of commercial feed additives sold with multi-mycotoxin binding claims. Ten feed additives were obtained and categorised into three groups based on their main composition. Their capacity to simultaneously adsorb deoxynivalenol (DON), zearalenone (ZEN), fumonisin B1 (FB1), ochratoxin A (OTA), aflatoxin B1 (AFB1) and T-2 toxin was assessed and compared using an in vitro model designed to simulate the gastrointestinal tract of a monogastric animal. Results showed that only one product (a modified yeast cell wall) effectively adsorbed more than 50% of DON, ZEN, FB1, OTA, T-2 and AFB1, in the following order: AFB1 > ZEN > T-2 > DON > OTA > FB1. The remaining products were able to moderately bind AFB1 (44–58%) but had less, or in some cases, no effect on ZEN, FB1, OTA and T-2 binding (<35%). It is important for companies producing mycotoxin binders that their products undergo rigorous trials under the conditions which best mimic the environment that they must be active in. Claims on the binding efficiency should only be made when such data has been generated. View Full-Text
Keywords: mycotoxins; animal feed; mycotoxin binders; feed safety mycotoxins; animal feed; mycotoxin binders; feed safety
►▼ Show Figures 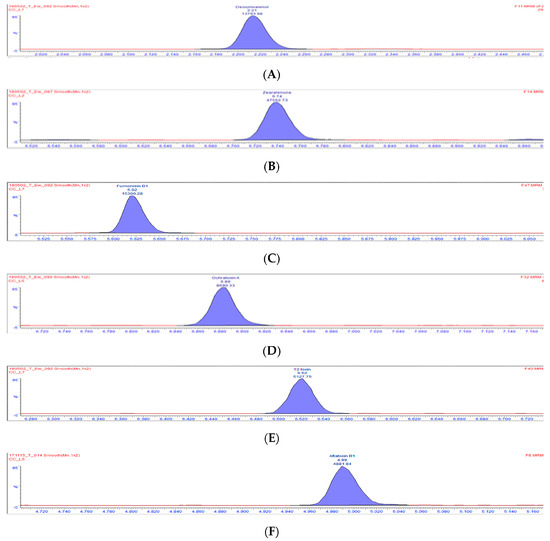