Interannual Variability of Dinophysis acuminata and Protoceratium reticulatum in a Chilean Fjord: Insights from the Realized Niche Analysis

Blooms of Dinophysis acuminata occur every year in Galicia (northwest Spain), between spring and autumn. These blooms contaminate shellfish with lipophilic toxins and cause lengthy harvesting bans. They are often followed by short-lived blooms of Dinophysis acuta, associated with northward longshore transport, at the end of the upwelling season. During the summers of 1989 and 1990, dense blooms of D. acuta developed in situ, initially co-occurring with D. acuminata and later with the paralytic shellfish toxin-producer Gymnodinium catenatum. Unexplored data from three cruises carried out before, during, and following autumn blooms (13–14, 27–28 September and 11–12 October) in 1990 showed D. acuta distribution in shelf waters within the 50 m and 130 m isobaths, delimited by the upwelling front. A joint review of monitoring data from Galicia and Portugal provided a mesoscale view of anomalies in SST and other hydroclimatic factors associated with a northward displacement of the center of gravity of D. acuta populations. At the microscale, re-examination of the vertical segregation of cell maxima in the light of current knowledge, improved our understanding of niche differentiation between the two species of Dinophysis. Results here improve local transport models and forecast of Dinophysis events, the main cause of shellfish harvesting bans in the most important mussel production area in Europe. View Full-Text
Keywords: Dinophysis acuta; Dinophysis acuminata; DSP; physical–biological interactions; niche partitioning; climatic anomaly Dinophysis acuta; Dinophysis acuminata; DSP; physical–biological interactions; niche partitioning; climatic anomaly
►▼ Show Figures 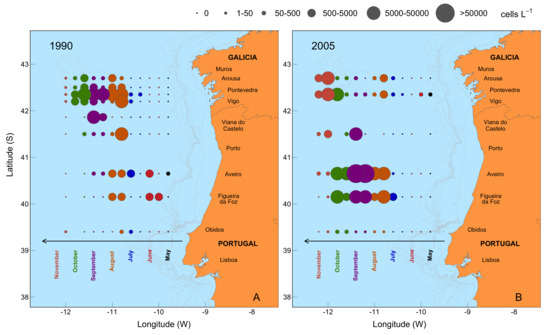