Type B trichothecene mycotoxin deoxynivalenol (DON) is one of the most frequently occurring food contaminants. By inducing trans-activation of a number of pro-inflammatory cytokines and increasing the stability of their mRNA, trichothecene can impair intestinal health. Several yeast products, especially Saccharomyces cerevisiae, have the potential for improving the enteric health of piglets, but little is known about the mechanisms by which the administration of yeast counteracts the DON-induced intestinal alterations. Using a pig jejunum explant model, a whole-transcriptome analysis was performed to decipher the early response of the small intestine to the deleterious effects of DON after administration of S. cerevisiae boulardii strain CNCM I-1079. Compared to the control condition, no differentially expressed gene (DE) was observed after treatment by yeast only. By contrast, 3619 probes—corresponding to 2771 genes—were differentially expressed following exposure to DON, and 32 signaling pathways were identified from the IPA software functional analysis of the set of DE genes. When the intestinal explants were treated with S. cerevisiae boulardii prior to DON exposure, the number of DE genes decreased by half (1718 probes corresponding to 1384 genes). Prototypical inflammation signaling pathways triggered by DON, including NF-κB and p38 MAPK, were reversed, although the yeast demonstrated limited efficacy toward some other pathways. S. cerevisiae boulardii also restored the lipid metabolism signaling pathway, and reversed the down-regulation of the antioxidant action of vitamin C signaling pathway. The latter effect could reduce the burden of DON-induced oxidative stress. Altogether, the results show that S. cerevisiae boulardii reduces the DON-induced alteration of intestinal transcriptome, and point to new mechanisms for the healing of tissue injury by yeast. View Full-Text
Keywords: deoxynivalenol; Saccharomyces cerevisiae boulardii CNCM I-1079; intestine; transcriptome; inflammation; oxidative stress; lipid metabolism deoxynivalenol; Saccharomyces cerevisiae boulardii CNCM I-1079; intestine; transcriptome; inflammation; oxidative stress; lipid metabolism
►▼ Show Figures 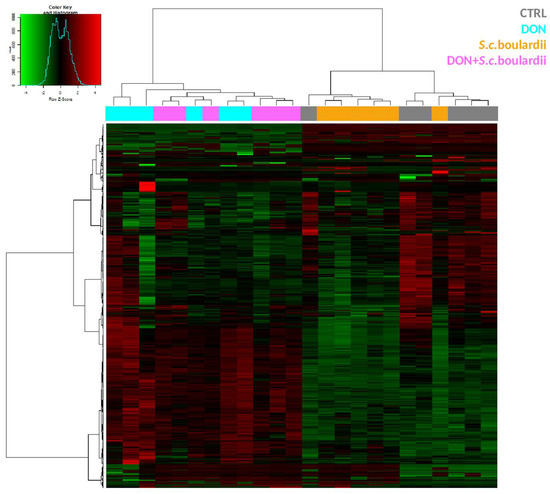