Tolerance and Excretion of the Mycotoxins Aflatoxin B1, Zearalenone, Deoxynivalenol, and Ochratoxin A by Alphitobius diaperinus and Hermetia illucens from Contaminated Substrates

This study aimed to investigate the potential accumulation of mycotoxins in the lesser mealworm (Alphitobius diaperinus, LMW) and black soldier fly (Hermetia illucens, BSF) larvae. Feed was spiked with aflatoxin B1, deoxynivalenol (DON), ochratoxin A or zearalenone, and as a mixture of mycotoxins, to concentrations of 1, 10, and 25 times the maximum limits set by the European Commission for complete feed. This maximum limit is 0.02 mg/kg for aflatoxin B1, 5 mg/kg for DON, 0.5 mg/kg for zearalenone and 0.1 mg/kg for ochratoxin A. The mycotoxins and some of their metabolites were analysed in the larvae and residual material using a validated and accredited LC-MS/MS-based method. Metabolites considered were aflatoxicol, aflatoxin P1, aflatoxin Q1, and aflatoxin M1, 3-acetyl-DON, 15-acetyl-DON and DON-3-glycoside, and α- and β-zearalenol. No differences were observed between larvae reared on mycotoxins individually or as a mixture with regards to both larvae development and mycotoxin accumulation/excretion. None of the mycotoxins accumulated in the larvae and were only detected in BSF larvae several orders of magnitude lower than the concentration in feed. Mass balance calculations showed that BSF and LMW larvae metabolized the four mycotoxins to different extents. Metabolites accounted for minimal amounts of the mass balance, except for zearalenone metabolites in the BSF treatments, which accounted for an average maximum of 86% of the overall mass balance. Both insect species showed to excrete or metabolize the four mycotoxins present in their feed. Hence, safe limits for these mycotoxins in substrates to be used for these two insect species possibly could be higher than for production animals. However, additional analytical and toxicological research to fully understand the safe limits of mycotoxins in insect feed, and thus the safety of the insects, is required. View Full-Text
Keywords: insects; food safety; feed safety; contaminants; bioaccumulation; excretion; lesser mealworm; black soldier fly; Alphitobius diaperinus; Hermetia illucens insects; food safety; feed safety; contaminants; bioaccumulation; excretion; lesser mealworm; black soldier fly; Alphitobius diaperinus; Hermetia illucens
►▼ Show Figures 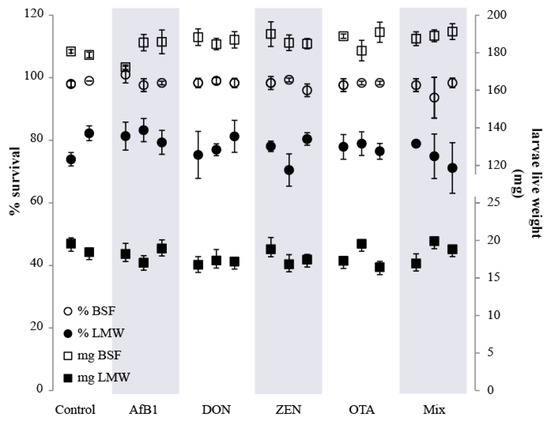