Tolerance and Excretion of the Mycotoxins Aflatoxin B1, Zearalenone, Deoxynivalenol, and Ochratoxin A by Alphitobius diaperinus and Hermetia illucens from Contaminated Substrates
Previous Article in Journal

The Major Fusarium Species Causing Maize Ear and Kernel Rot and Their Toxigenicity in Chongqing, China

Fusarium verticillioides, F. proliferatum, and F. meridionale were identified as the predominant fungi among 116 Fusarium isolates causing maize ear and kernel rot, a destructive disease in Chongqing areas, China. The toxigenic capability and genotype were determined by molecular amplification and toxin assay. The results showed that the key toxigenic gene FUM1 was detected in 47 F. verticillioides and 19 F. proliferatum isolates. Among these, F. verticillioides and F. proliferatum isolates mainly produced fumonisin B1, ranging from 3.17 to 1566.44, and 97.74 to 11,100.99 µg/g for each gram of dry hyphal weight, with the averages of 263.94 and 3632.88 µg/g, respectively, indicating the F. proliferatum isolates on average produced about an order of magnitude more fumonisins than F. verticillioides did in these areas, in vitro. Only NIV genotype was detected among 16 F. meridionale and three F. asiaticum isolates. Among these, 11 F. meridionale isolates produced NIV, varying from 17.40 to 2597.34 µg/g. ZEA and DON toxins were detected in 11 and 4 F. meridionale isolates, with the toxin production range of 8.35–78.57 and 3.38–33.41 µg/g, respectively. Three F. asiaticum isolates produced almost no mycotoxins, except that one isolate produced a small amount of DON. The findings provide us with insight into the risk of the main pathogenic Fusarium species and a guide for resistance breeding in these areas. View Full-Text
Keywords: maize; ear and kernel rot; Fusarium species; toxigenic genotype; mycotoxin production maize; ear and kernel rot; Fusarium species; toxigenic genotype; mycotoxin production
►▼ Show Figures 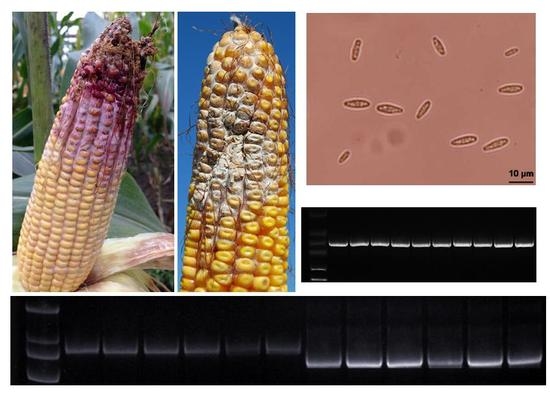