Biomarker of Aflatoxin Ingestion: 1H NMR-Based Plasma Metabolomics of Dairy Cows Fed Aflatoxin B1 with or without Sequestering Agents

The study applied 1H NMR-based plasma metabolomics to identify candidate biomarkers of aflatoxin B1 (AFB1) ingestion in dairy cows fed no sequestering agents and evaluate the effect of supplementing clay and/or a Saccharomyces cerevisiae fermentation product (SCFP) on such biomarkers. Eight lactating cows were randomly assigned to 1 of 4 treatments in a balanced 4 × 4 Latin square design with 2 squares. Treatments were: control, toxin (T; 1725 µg AFB1/head/day), T with clay (CL; 200 g/head/day), and CL with SCFP (CL + SCFP; 35 g of SCFP/head/day). Cows in T, CL, and CL + SCFP were dosed with AFB1 from d 26 to 30. The sequestering agents were top-dressed from d 1 to 33. On d 30 of each period, 15 mL of blood was taken from the coccygeal vessels and plasma samples were prepared by centrifugation. Compared to the control, T decreased plasma concentrations of alanine, acetic acid, leucine, arginine and valine. In contrast, T increased plasma ethanol concentration 3.56-fold compared to control. Treatment with CL tended to reduce sarcosine concentration, whereas treatment with CL + SCFP increased concentrations of mannose and 12 amino acids. Based on size of the area under the curve (AUC) of receiver operating characteristic and fold change (FC) analyses, ethanol was the most significantly altered metabolite in T (AUC = 0.88; FC = 3.56); hence, it was chosen as the candidate biomarker of aflatoxin ingestion in dairy cows fed no sequestering agent.
Keywords: aflatoxin; dairy cow; metabolomics; plasma aflatoxin; dairy cow; metabolomics; plasma

Aflatoxins are a type of mycotoxins produced by strains of Aspergillus flavus, Aspergillus parasiticus, and Aspergillus nominus on growing forages or stored feeds [1]. Aflatoxin B1 (AFB1) is the most widely studied and potent carcinogen among all aflatoxins [2]. Up to 6% of its metabolite can be transferred into milk as aflatoxin M1 [3]. Aflatoxin ingestion by cows and the resultant aflatoxicosis cause effects such as reduced cow health and performance, impaired liver function, and increased susceptibility to diseases [4]. Several approaches, notably the use of clay-based sequestering agents and Saccharomyces cerevisiae fermentation product (SCFP), have been documented to reduce the transfer of aflatoxin into the milk of dairy cows [5,6]. Our recent study revealed that supplementation of diet with both SCFP and clay products was more effective than clay alone at maintaining milk production during aflatoxin challenge [7]. Despite the efficacy of these sequestering agents at reducing the milk aflatoxin concentration, the plasma metabolome of aflatoxin-challenged dairy cows has not been described. Such information is urgently needed to identify biomarkers of aflatoxin ingestion that may allow early detection and mitigation of aflatoxicosis in livestock due to the variable clinical signs of the syndrome that resemble those of other diseases [8]. Currently, diagnosis of aflatoxin ingestion is based on feed mycotoxin analysis, which may be inaccurate considering difficulty in obtaining representative feed sample because of uneven distribution of toxin within the feed [9]. Therefore, studies aiming at identifying biomarkers of aflatoxicosis in ruminants are urgently needed as a similar approach has been successfully applied to determine aflatoxin exposure in humans [10].
Metabolomics is the study of level of small endogenous molecules or metabolites [11]. High-resolution proton nuclear magnetic resonance spectroscopy (1H NMR)-based metabolomics can identify and quantify many metabolites, such as amino acids, sugars, alcohols, organic acids, amines, tricarboxylic acid cycle intermediates, and short chain fatty acids in biofluids [12]. Though 1H NMR has lower sensitivity than mass spectrometry-based techniques, it provides the most reliable quantitative information of metabolites [13]. In addition, the high analytical reproducibility is a significant advantage of 1H NMR over mass spectrometry-based methods, such as gas chromatography mass spectrometry (GC-MS) and liquid chromatography mass spectrometry (LC-MS) [14,15]. Sun et al. [16] demonstrated the utility of 1H NMR-based plasma metabolomics for the detection of ketosis in dairy cows. Therefore, the objectives of this study are to use 1H NMR-based plasma metabolomics (1) to identify potential biomarker(s) of aflatoxin ingestion in dairy cows fed no sequestering agents and (2) to assess the effects of clay and/or SCFP-based sequestering agents on the plasma metabolome of dairy cows challenged with AFB1.

The animal trial protocol was reviewed and approved by the Institutional Animal Care and Use Committee of University of Florida (IACUC Protocol #: 201509099, Date of approval: 13 January 2016).

The experiment was part of a larger study that evaluated the effect of supplementing clay with or without a SCFP on the performance and health of dairy cows challenged with AFB1. Detailed information about cows and feeding has been reported in our companion paper [7]. Briefly, eight lactating multiparous Holstein cows in early lactation (64 ± 11 days in milk) were stratified by parity and milk production and randomly assigned to 1 of 4 treatment sequences arranged in a balanced 4 × 4 Latin square design with 2 replicate squares, four 33-d periods, and a 5-d washout interval between periods. Dietary treatments were (1) control (basal diet without additives), (2) toxin (T; oral dose of 1725 µg of AFB1/head per day), (3) toxin with bentonite clay (CL; 200 g/head per day; Astra-Ben-20, Prince Agri Products Inc., Quincy, IL, USA), and (4) CL plus SCFP (CL + SCFP; 35 g of SCFP/head per day; Diamond V, Cedar Rapids, IA, USA). The basal diet was fed as a total mixed ration (TMR) containing, on a dry matter (DM) basis, 36.1% corn silage, 8.3% alfalfa hay and 55.6% concentrate mix. The TMR was formulated to meet or exceed nutrient requirements of lactating dairy cows producing at least 30 kg/d of milk [44] with CPM-Dairy version 3.0.10 software (www.cpmdairy.net).
Cows in treatments T, CL, and CL + SCFP were orally dosed with 1725 µg of AFB1/head per day from day 26 to 30 before the morning feeding to give a dietary concentration of 75 µg/kg of DM based on estimated daily DMI of 23 kg/d. The sequestering agents were top-dressed on the respective TMR from day 1 to 33 of each period. Aflatoxin B1, obtained from the University of Missouri Diagnostic Laboratory (Columbia, MO, USA), was mixed with 10 g of ground corn and 4 mL of molasses and then weighed into gelatin capsules before orally dosing each cow daily. Control cows were provided with similar quantities of ground corn and molasses without AFB1. A 5-d washout period was imposed after each withdrawal period to minimize carryover of treatment effects between periods.
Subsamples of the basal diet and ground corn used in this study were initially analyzed for AFB1, ochratoxin, zearalenone, and deoxynivalenol using HPLC at the University of Missouri Veterinary Diagnostic Laboratory. These mycotoxins were below lower detection limits (5 µg/kg for aflatoxins; 0.5 mg/kg for ochratoxin, zearalenone, and deoxynivalenol).

On day 30 of each experimental period, 15 mL of blood was taken from the coccygeal vessels into vacutainer tubes containing sodium heparin anticoagulant. Plasma samples were immediately prepared by centrifugation at 2500× g for 20 min at 4 °C, and stored at −20 °C until NMR analysis was done.

A deproteinization step, involving ultra-filtration, previously described by Psychogios et al. [45], was used to remove plasma lipoproteins and proteins with large molecular weight, which might affect the identification of the small molecular weight metabolites. Prior to filtration, 3 kDa cut-off centrifugal filter units (Amicon Microcon YM-3, Sigma-Aldrich, St. Louis, MO, USA) were rinsed five times each with 0.5 mL of H2O and centrifuged (10,000 rpm for 10 min) to remove residual glycerol bound to the filter membranes. Aliquots of each plasma sample were then transferred into the centrifuge filter devices and spun (10,000 rpm for 20 min) to remove macromolecules (primarily protein and lipoproteins) from the sample. The subsequent filtrates were collected and the volumes were recorded. Subsequently, 160 µL of the sample was mixed with 40 µL of a standard buffer solution (54% D2O:46% 250 mM KH2PO4, pH 7.0). The sample (200 µL) was then transferred to a 3 mm SampleJet NMR tube for subsequent spectral analysis. All 1H-NMR spectra were collected on a 700 MHz Avance III (Bruker, Billerica, MA, USA) spectrometer equipped with a 5 mm HCN Z-gradient pulsed-field gradient cryoprobe. The 1H-NMR spectra were acquired at 25 °C using the first transient of the nuclear overhauser effect spectroscopy (NOESY) pre-saturation pulse sequence, chosen for its high degree of quantitative accuracy [46]. All free induction decays were zero-filled to 250 K data points. The singlet produced by the 4,4-dimethyl-4-silapentane-1-sulfonic acid (DSS) methyl groups was used as an internal standard for chemical shift referencing (set to 0 ppm). The 1H NMR spectra were processed and analyzed using a Bayesil automated analysis software package, which allows for qualitative and quantitative analysis of an NMR spectrum by automatically and semi-automatically fitting spectral signatures from an internal database to the spectrum using a custom metabolite library [47]. Each spectrum was further inspected by an NMR spectroscopist to minimize compound misidentification and misquantification.

The metabolite data were imported into MetaboAnalyst 4.0 (https://www.metaboanalyst.ca) [48] for multivariate analysis. Data were first log-transformed and pareto-scaled [49]. Partial least squares discriminant analysis (PLS-DA), a tool used to optimize separation between different groups of samples [50], was used to visualize the differences between the control group and each of T, CL, and CL + SCFP groups. A permutation test (n = 2000) was performed to establish whether the observed discriminations between the groups were valid [47].
The metabolite data were subjected to statistical analysis using the GLIMMIX procedure of SAS version 9.4 (SAS Institute Inc., Cary, NC, USA). The model used for the analysis included the fixed effects of treatment, experimental period, interaction of treatment and experimental period, random effects of cow, square, interaction of treatment and square, and interaction of experimental period and square, respectively. Denominator degrees of freedom were estimated by the Kenward-Roger option in the MODEL statement. Preplanned nonorthogonal contrasts that were examined to compare means included the following: control vs. T, control vs. CL, and control vs. CL + SCFP. Significance was declared at p ≤ 0.05, and tendencies to significance were declared at 0.05 < p ≤ 0.10.
Biomarker analysis based on receiver operating characteristic (ROC) curves was performed for control and T groups using MetaboAnalyst 4.0 to identify biomarker candidates of aflatoxin ingestion in dairy cows fed no sequestering agents. Area under the curve (AUC) from ROC curve, a numerical value that indicates the relationship between sensitivity and specificity for a given diagnostic test [51], and fold change (FC) analysis (mean concentration of metabolite in T group/mean concentration of metabolite in C group) were the metrics used to interpret the performance of different biomarkers. An AUC close to 1 indicates an effective sensitivity and specificity [51]. Therefore, the most important biomarker candidate was selected on the basis of FC > 1.2 and AUC greater than 0.8 [52].

We gratefully acknowledge Diamond V Inc. (Cedar Rapids, IA) for funding the animal experiment. Cost of plasma metabolomics analysis was supported by funds from the US Department of Agriculture’s National Institute of Food and Agriculture Evans-Allen project.

We are grateful to the staff of the University of Florida (Gainesville) dairy unit for their assistance with the study. 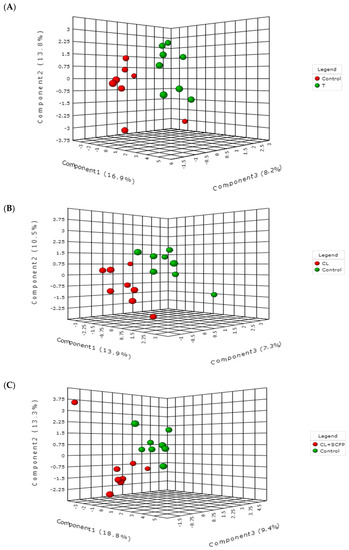