The Individual and Combined Effects of the Cyanotoxins, Anatoxin-a and Microcystin-LR, on the Growth, Toxin Production, and Nitrogen Fixation of Prokaryotic and Eukaryotic Algae
Previous Article in Journal

Microcystin-LR (MC-LR) is the most widely distributed microcystin (MC) that is hazardous to environmental safety and public health, due to high toxicity. Microbial degradation is regarded as an effective and environment-friendly method to remove it, however, the performance of MC-degrading bacteria in environmentally relevant pollution concentrations of MC-LR and the degradation pathways remain unclear. In this study, one autochthonous bacterium, Sphingopyxis sp. m6 which exhibited high MC-LR degradation ability, was isolated from Lake Taihu, and the degrading characteristics in environmentally relevant pollution concentrations were demonstrated. In addition, degradation products were identified by utilizing the full scan mode of UPLC-MS/MS. The data illustrated that strain m6 could decompose MC-LR (1–50 μg/L) completely within 4 h. The degradation rates were significantly affected by temperatures, pH and MC-LR concentrations. Moreover, except for the typical degradation products of MC-LR (linearized MC-LR, tetrapeptide, and Adda), there were 8 different products identified, namely, three tripeptides (Adda-Glu-Mdha, Glu-Mdha-Ala, and Leu-MeAsp-Arg), three dipeptides (Glu-Mdha, Mdha-Ala, and MeAsp-Arg) and two amino acids (Leu, and Arg). To our knowledge, this is the first report of Mdha-Ala, MeAsp-Arg, and Leu as MC-LR metabolites. This study expanded microbial degradation pathways of MC-LR, which lays a foundation for exploring degradation mechanisms and eliminating the pollution of microcystins (MCs). View Full-Text
Keywords: MC-LR; environmental concentration; metabolite; degradation pathway; UPLC-MS/MS MC-LR; environmental concentration; metabolite; degradation pathway; UPLC-MS/MS
►▼ Show Figures 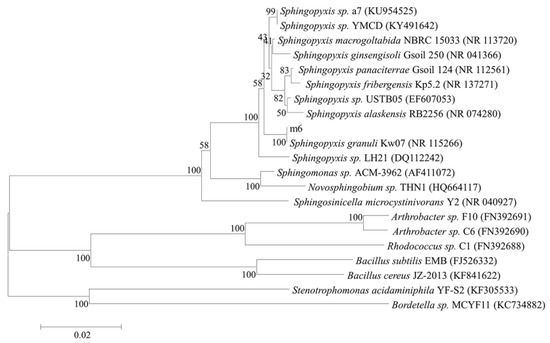