Ciguatera fish poisoning (CFP) is a type of food poisoning caused by the consumption of a variety of toxic ciguatera fish species in the tropical and subtropical waters. Although there have been a large number of suspected CFP cases in the Southeast Asian countries, few were confirmed with causative ciguatoxins (CTXs), and reliable information on the symptoms still remains rather limited. In the present study, CTXs in red snapper Lutjanus bohar, implicated in two suspected CFP cases in Vietnam in 2014 and 2016, were determined by use of the single-quadrupole selected ion monitoring (SIM) liquid chromatography/mass spectrometry (LC/MS). Ciguatoxin-1B (CTX-1B), 54-deoxyCTX-1B, and 52-epi-54-deoxyCTX-1B were detected in the red snapper by our LC/MS method. Moreover, CTX-1B, 54-deoxyCTX-1B, and 52-epi-54-deoxyCTX-1B were further identified by the time of flight (TOF) LC/MS with the exact mass spectrum. The CTX profile of the red snapper in Vietnam is similar to those of ciguatera fish from Australia, Okinawa Islands in Japan, Kiribati, and Hong Kong. This is the first comprehensive report unambiguously identifying the causative toxins in fish implicated with reliable information on the poisoning symptoms in CFP in Vietnam and/or Southeast Asian countries. View Full-Text
Keywords: ciguatera fish poisoning (CFP); ciguatoxin-1B (CTX-1B); LC/MS; red snapper; TOF; Vietnam ciguatera fish poisoning (CFP); ciguatoxin-1B (CTX-1B); LC/MS; red snapper; TOF; Vietnam
►▼ Show Figures 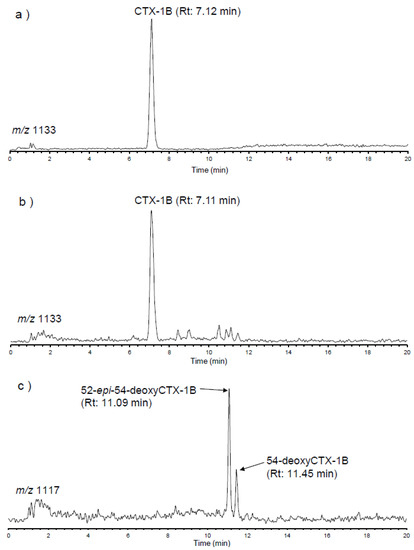