:
Vascular medial calcification is often observed in patients with arteriosclerosis. It is also associated with systolic hypertension, wide pulse pressure, and fluctuation of blood pressure, which results in cardiovascular events. Eicosapentaenoic acid (EPA) has been shown to suppress vascular calcification in previous animal experiments. We investigated the inhibitory effects of EPA on Wnt signaling, which is one of the important signaling pathways involved in vascular calcification. Intake of food containing 5% EPA resulted in upregulation of the mRNA expression of Klotho, an intrinsic inhibitor of Wnt signaling, in the kidneys of wild-type mice. Expression levels of β-catenin, an intracellular signal transducer in the Wnt signaling pathway, were increased in the aortas of Klotho mutant (kl/kl) mice compared to the levels in the aortas of wild-type mice. Wnt3a or BIO, a GSK-3 inhibitor that activates β-catenin signaling, upregulated mRNA levels of AXIN2 and LEF1, Wnt signaling marker genes, and RUNX2 and BMP4, early osteogenic genes, in human aorta smooth muscle cells. EPA suppressed the upregulation of AXIN2 and BMP4. The effect of EPA was cancelled by T0070907, a PPARγ inhibitor. The results suggested that EPA could suppress vascular calcification via the inhibition of Wnt signaling in osteogenic vascular smooth muscle cells via PPARγ activation.
Keywords:
vascular calcification; eicosapentaenoic acid; Wnt signaling

Klotho mutant (kl/kl) mice were purchased from Clea Japan (Tokyo, Japan). Four-week-old kl/kl mice and wild-type mice were given diets either containing 5% EPA (Mochida Pharmaceutical Co., Ltd., Tokyo, Japan) (EPA diet), or not containing EPA (control diet), for four weeks. All animal protocols were approved and conducted according to the recommendations of Okayama University on Animal Care and Use. The animal procedures performed conform to the National Institutes of Health (NIH) guidelines (Guide for the Care and Use of Laboratory Animals).

HAoSMCs were plated on 0.1% gelatin-coated cover glasses, and fixed in 4% paraformaldehyde. The cells were stained with rhodamine-phalloidin (1:200 dilution, Molecular Probes, Eugene, OR, USA) and Hoechst 33342 (1:5000 dilution, Molecular Probes). Rhodamine-phalloidin is an F-actin probe conjugated to the red-orange fluorescent dye, tetramethylrhodamine. Hoechst 33342 is a blue dye for cell fluorescence of nuclei.

All data are expressed as means ± SE. Statistical analysis was performed by Student’s t test for unpaired data or one-way ANOVA, with comparison of different groups by Tukey’s post hoc test using SPSS statistics 24 (IBM, Armonk, NY, USA). Values of p < 0.05 were considered to be significant.

Klotho mRNA levels in mice fed the EPA diet (n = 8) were about 1.5 times higher than the levels in mice fed the control diet (n = 4) (Figure 1A). In kl/kl mice, the intake of EPA did not change serum phosphate, and did not increase Klotho expression (control diet, n = 2; EPA diet, n = 2) (Figure 1B) [12]. Expression of the nuclear receptor and plasma membrane receptor of EPA, PPARγ and FFAR4, respectively, were confirmed by RT-PCR (Figure 1C).

3.2. Beta-Catenin Expression Increased in the Aortas of Kl/kl Mice

Wnt3a (100 ng/mL) increased not only the expression of Wnt signaling marker genes AXIN2 and LEF1, but also the expression of RUNX2 and BMP4, which are genes associated with vascular calcification [20,32,33,34,35]. Upregulation of these genes was suppressed by 25 μmol/L EPA (Figure 3A). EPA did not completely suppress the upregulation genes by Wnt3a at 10 μmol/L, and 100 μmol/L EPA induced cell death (Figure 3B). We therefore used 25 μmol/L EPA in subsequent experiments.

BIO (1 μmol/L), a GSK-3 inhibitor that activates β-catenin signaling, also increased the expression of AXIN2, LEF1, RUNX2 and BMP4. Upregulation of AXIN2 and BMP4 was significantly suppressed, and RUNX2 tended to be suppressed by 25 μmol/L EPA. EPA is known as a PPARγ agonist and also increased PPARG expression. The effects of EPA were cancelled by 10 μmol/L T0070907, a PPARγ inhibitor (Figure 4A). Additionally, BIO made actin fibers sparse, and EPA modestly mitigated the morphological change. The expression of MYH11, a mature contractile smooth muscle cell marker, was decreased by BIO, and the expression was recovered by EPA. T0070907 cancelled the effect of EPA (Figure 4A,B). The knockdown of FFAR4, a receptor of ω-3 fatty acids, did not cancel the inhibitory effect of EPA on AXIN2 and LEF1 expression (Figure 5A,B) [36].

Our study revealed that EPA upregulated the expression of Klotho, a Wnt signaling inhibitor, in the kidney and inhibited Wnt signaling in osteogenic VSMCs via PPARγ, as shown in Figure 6. These results suggested that the effects could lead to the suppression of vascular calcification. In addition to our previous study, the results of the present study using human VSMCs suggested that EPA can also affect human vascular calcification by the suppression of Wnt signaling [12]. This study is therefore a step toward the pathology of arteriosclerosis.
The intake of EPA increased Klotho mRNA expression in the kidney, as shown in Figure 1. Klotho inhibits the binding of Wnt ligands to their receptors [26]. The upregulated expression of Klotho in the kidney is presumed to suppress vascular calcification; however, we did not examine how EPA upregulated Klotho expression. Meanwhile, PPARγ activation has been reported to be one of the methods for increasing Klotho production in the kidney, because the Klotho gene has a PPAR-responsive element (PPRE) [25,37]. Additionally, EPA can directly activate PPARγ [38]. The upregulation of expression by EPA that was observed in our study is a compatible result. However, wild-type mice were used in this study to examine Klotho expression in the kidneys. Thus, it is unclear whether EPA increases Klotho production in a pathological situation. Further investigation using other pathological model animals without a Klotho defect is therefore required.
We previously reported that intake of an EPA diet also significantly suppressed vascular calcification in kl/kl mice, despite a defect of Klotho production [12]. Furthermore, it is not clear whether vascular Klotho is expressed endogenously [29,30,31]. Thus, we consequently investigated the direct effects of EPA on Wnt signaling in the aorta. Increased β-catenin expression in the aortas of kl/kl mice, as shown in Figure 2, suggested an enhancement of Wnt/β-catenin signaling in the calcified aorta.
Vascular calcification in the tunica media observed in kl/kl mice and CKD patients is a characteristic manifestation [21,39]. We therefore investigated the effect of EPA in VSMCs, which are a component of the tunica media. We revealed that the enhancement of Wnt/β-catenin signaling by a Wnt ligand or a GSK-3 β inhibitor resulted in osteogenic changes of human VSMCs, as previous studies have demonstrated [18,19,20,34,40]. Furthermore, EPA suppressed the changes, as shown in Figure 3 and Figure 4. EPA has also been reported to prevent palmitic acid-induced osteoblastic changes in VSMCs [41]. The mechanisms by which EPA suppresses vascular calcification have been reported to be a reduction of matrix metalloproteinase production, and a reduction of oxidative stress [11,12]. It has been shown that ω-3 fatty acids are known to suppress Wnt signaling in various types of cancer cells [42,43,44]. Thus, our results, shown in Figure 4, suggested that similar mechanisms might act in osteogenic VSMCs via activation of PPARγ.
We previously reported that FFAR4 signaling is responsible for decreasing oxidative stress in mice [12]; however, FFAR4 was not associated with the inhibitory effects of EPA on Wnt signaling in this experimental situation, as shown in Figure 5. These results suggested that FFAR4 signaling might suppress vascular calcification by other mechanisms.
It is not known whether a decrease in coronary calcification reduces cardiovascular events. Vascular calcification seems to prevent the rupture of vulnerable plaques, because a statin could increase vascular calcification, despite the reduction of cardiovascular events [45,46]. Evaluation using optical coherence tomography and intravascular ultrasound demonstrated that adding on EPA to statin did not change calcified plaque volume; however, it did stabilize the plaques of human coronary arteries [47,48]. Our study revealed that EPA suppresses Wnt signaling in smooth muscle cells. EPA is also known to affect macrophages and endothelial cells [49,50,51]. Additionally, Wnt signaling is associated with inflammation and aging [52,53]. EPA therefore seems to affect not only vascular calcificationm but also other arteriosclerotic processes via the modulation of Wnt signaling [54].
Since the amount of intake of EPA in this study is extremely large for humans, we should look for a specific target for clinical implication. EPA is converted to metabolites with various physiological activities in vivo [55,56,57,58]. We did not examine metabolites in this study because it is difficult to understand the effects of metabolites produced by cells other than VSMCs, e.g., endothelial cells, in an in vitro study [59]. Thus, analyses of metabolites in each tissue or organ might be useful to gain a deeper understanding of the effects of EPA on vascular calcification.
In conclusion, this study revealed that EPA increased the expression of Klotho, an inhibitor of Wnt signaling, in the kidney, and inhibited osteogenic change via enhancement of Wnt signaling in VSMCs. These effects of EPA might lead to suppression of vascular calcification.

The authors are grateful to Kaoru Akazawa and Masayo Ohmori for their technical assistance. 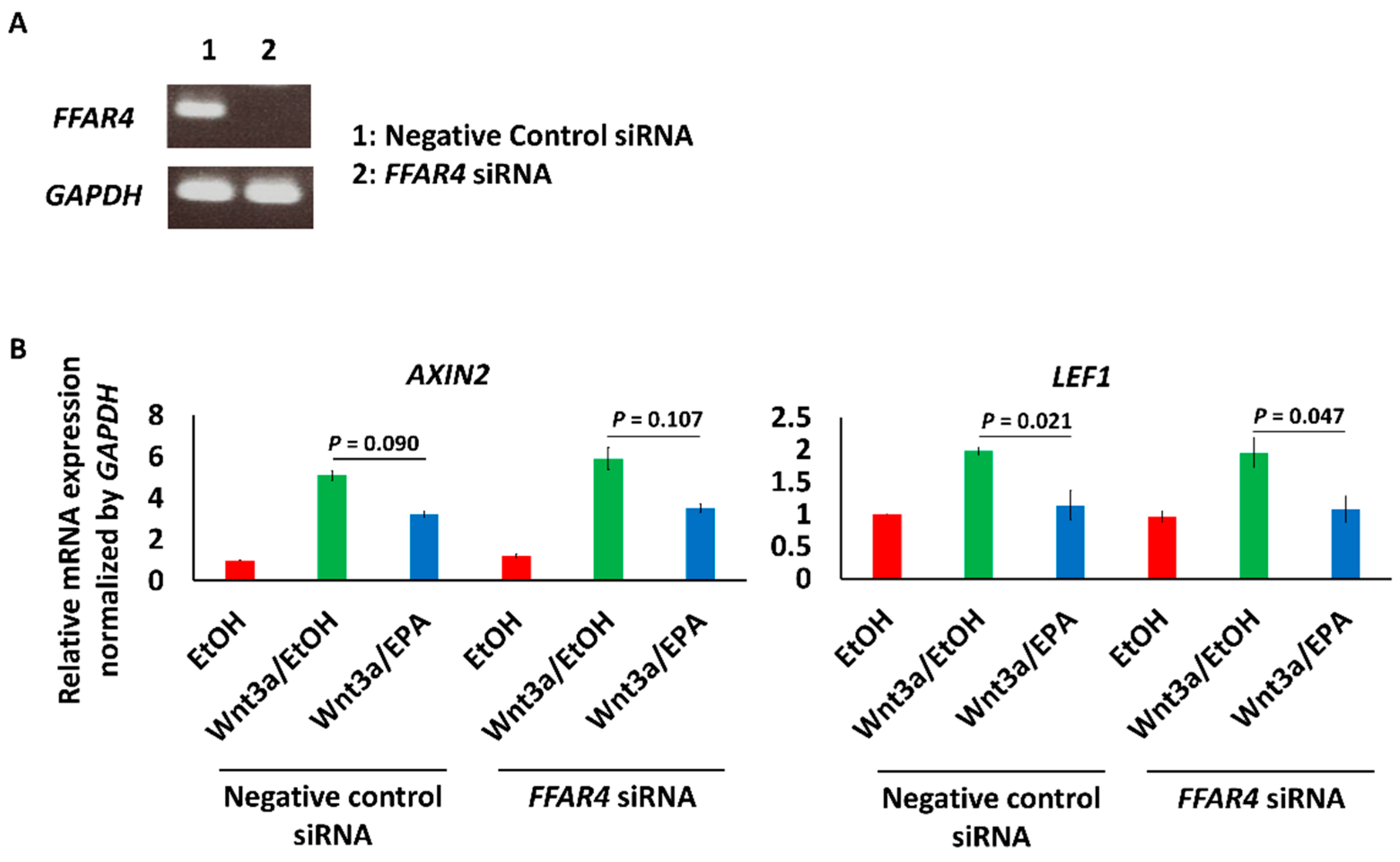 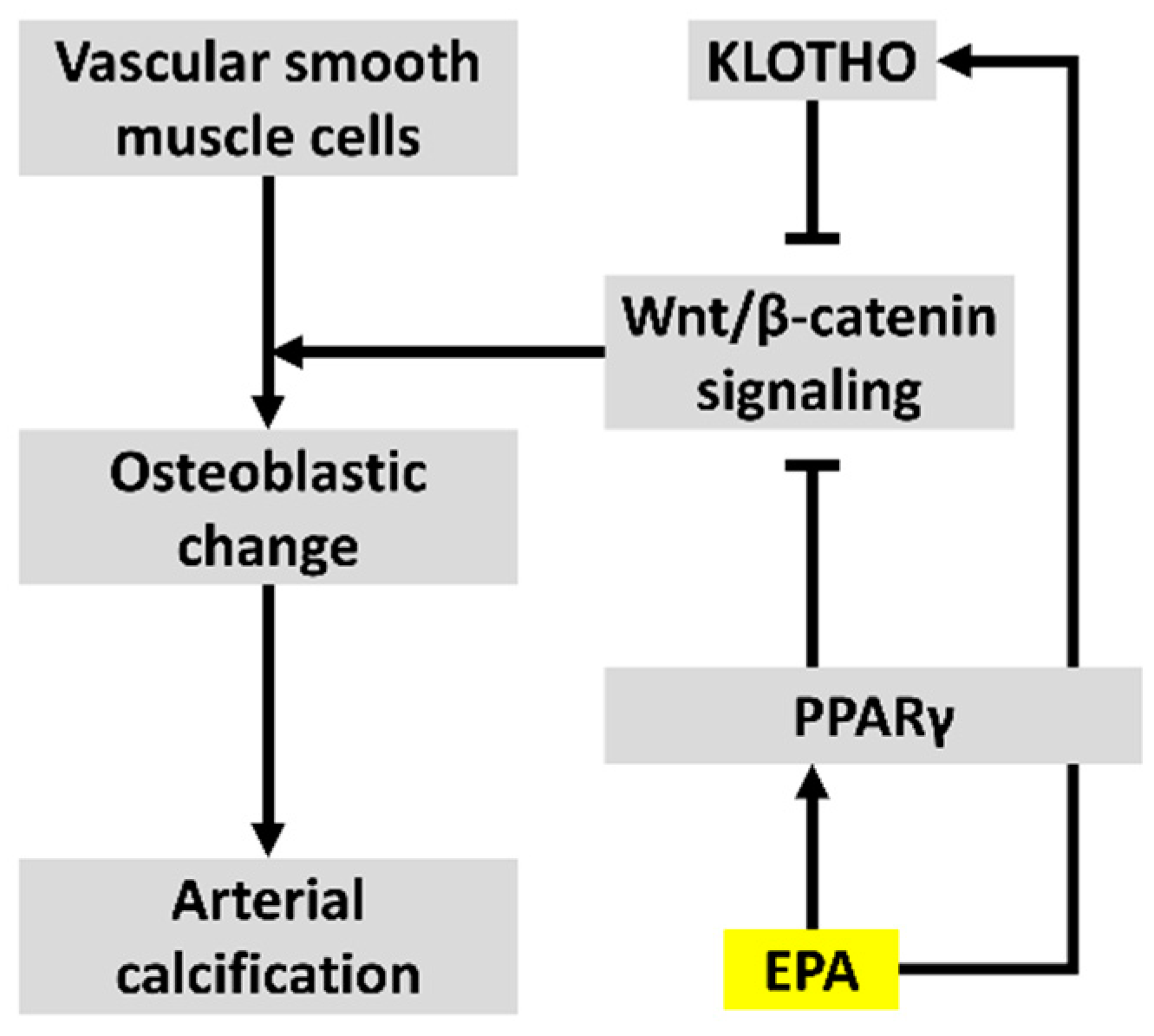