Trans Fat Intake and Its Dietary Sources in General Populations Worldwide: A Systematic Review
Next Article in Special Issue

Michael I. McBurney
1 and

Fat is a major source of energy. Evidence suggests that human health may be affected by quantity and types of fatty acids being consumed [1]. Only two fatty acids, α-linolenic acid (ALA, C18:3n-3) and linoleic acid (LA, C18:2n-6), are known to be essential for physiological and structure functions [2]. ALA and LA are also the principal n-3 and n-6 unsaturated fatty acids found in the western diet. Adequate Intakes (AI) have been set for ALA (1.6 g/d) and (1.1 g/d) and for LA (17 g/d) and (12 g/d) in men and women, respectively [3].
Within the body, ALA and LA are desaturated and elongated by shared enzymes to longer chain highly unsaturated fatty acids (HUFA), including the eicosanoids: prostaglandins, thromboxanes and leukotrienes [4]. The conversion rate of ALA to eicosapentaenoic acid (EPA, C20:5n-3) and then to docosahexaenoic acid (DHA, C22:6n-3) is very low [5], influenced by the proportions of ALA and LA in the diet [6], and lower in men than women [5]. With increased consumption of vegetable oils high in LA (corn, soybean, sunflower, safflower, and cottonseed oil), dietary imbalances in n-6 to n-3 content are hypothesized to contribute to chronic overproduction of arachidonic acid (AA, C20:4n-6) derived eicosanoids [7,8,9]. EPA:AA imbalances may promote inflammation [10,11,12] and increase cardiovascular risk [13,14,15].
Ingesting greater amounts of dietary EPA and DHA increases concentrations in blood [16,17]. The cytosolic phospholipase A2 (cPLA2) enzyme does not appear to discriminate between AA or EPA [18]. Therefore, increasing circulating EPA + DHA concentrations by consuming more fatty fish and/or omega-3 supplements changes the production of bioactive eicosanoids and may provide more DHA to the brain and eye [16,17,19].
Data from the Food4Me European randomized controlled trial suggests that personalized interventions may promote larger, more appropriate, and sustained changes in dietary behavior and health outcomes [20]. Given the suboptimal EPA + DHA status of most Americans [21], objectives of this cross-sectional employer-based study were: (1) to assess whole blood fatty acid levels of volunteers participating in an onsite wellness biometric screening program and (2) to determine if an incentive, a $5 coupon for a 90-day supply of omega-3 supplements, leads to incremental dietary behavior changes that affect blood EPA + DHA concentrations.

This study was approved by the New England Independent Review Board, a WIRB-Copernicus Group Company, Needham, MA, USA (NEIRB #20160533) and registered at clinicaltrials.gov as NCT02883764. Employees of Royal DSM company working at one of many sites throughout the United States can reduce employee-based health insurance costs by having annual biometric screenings. Approximately 40% of employees at 16 locations typically participate in a worksite biometric screening program, Healthyroads Wellness®, that includes a finger stick to measure blood cholesterol concentrations. The date and location of the Healthyroads Wellness® biometric screening are disseminated by email and signs are posted in common areas. In 2016, the email announcement (Figure S1) included a copy of this omega-3 fatty acid research proposal and people were encouraged to have whole blood fatty acid concentrations measured.
Upon arrival for their Healthyroads Wellness® screening, employees volunteering to have blood fatty acid levels measured signed the Informed Consent (Figure S2), completed the Test Request (Figure S3) with a validated food-frequency dietary survey for assessing long-chain n-3 polyunsaturated fatty acids [22], and labeled a filter paper (Figure S4) before proceeding to the biometric screening station.
Based on workplace demographics, number of employees, male/female distribution, and salaried/hourly proportions, the 16 worksites were categorized so that all employees volunteering at seven of the 16 worksites would receive a coupon ($5 value) for a 90 day supply of fish oil capsules (1400 mg fish oil, 900 mg omega-3 fatty acids, 647 mg EPA + 253 mg DHA per capsule) redeemable from a national retailer (Figure S5). Volunteers from the remaining nine sites were not offered a coupon.
A single drop of scavenged whole blood was collected directly to a filter paper (Ahlstrom 226, PerkinElmer, Greenville, SC, USA) pretreated with an antioxidant cocktail (FAPS™, OmegaQuant Analytics, LLC, Sioux Falls, SD, USA) to protect unsaturated fatty acids (FAs) from oxidation. After collection, the filter paper, Informed Consent, and Test Request form from each volunteer were stapled together. Materials from each worksite were shipped in bulk at ambient temperature to OmegaQuant Analytics LLC where blood samples were analyzed by capillary gas chromatography and the omega-3 index was determined [23]. OmegaQuant Analytics LLC sent an Omega-3 Index Report to the email address provided by each volunteer (Figure S6).
Three months after the Healthyroads Wellness® screening, all employees received an email, including a copy of the research protocol, informing them of a second opportunity to have whole blood fatty acids measured onsite. Informed consent, test request with validated dietary survey, and blood samples collected from volunteers were sent to OmegaQuant Analytics LLC as described above.
OmegaQuant Analytics collated and anonymized dietary survey and fatty acid data. The percent n-6 in HUFA was calculated according to the equation given in citation [9] except that C20:3n-9 was not measured. Differences between baseline and retest measurements were compared for significance using t-tests. Simple linear regression was used to assess the linear relationship between variables. To contrast multiple groups, a one-way ANOVA was performed. The level of significance was set at 0.05, adjusted with the Bonferroni correction for multiple analyses. Statistical analyses were conducted using SAS (Version 9.3, Durham, NC, USA).

The cross-sectional study was designed to test the impact of receiving personalized nutritional assessment with or without an incentive ($5 coupon for 90-day supply of omega-3 supplements) on omega-3 fatty acid status three months later in an employed population who was unaware a second assessment would be available (Figure 1).

Initially, 636 individuals participated in the first biometrics screening with 302 (47.5%) receiving coupons. The coupon manufacturer provided coupons with a bar code that are scanned upon redemption at all retail locations. The vendor tracked the number of coupons redeemed. Only three coupons were redeemed and data from all worksites have been combined. An additional 198 individuals were tested three months later and 149 participants were retested for the second time. In total, 834 individuals, with an average age of 45 years and 41% female took part in the baseline biometrical testing (Table 1).
The average omega-3 intake from food was 254 ± 9 mg/day (Table 2). Omega-3 supplement users (24% of the study population) had higher total omega-3 intakes (965 ± 53 mg/day) than non-users (248 ± 12 mg/day).
Only 37% of subjects were consuming ≥250 mg EPA + DHA from food sources daily. The average baseline omega-3 index was 5.0% (Table 3) and 95.8% of participants were below the recommended 8% [24]. The omega-3 index was significantly lower in men (4.8% ± 0.07) than women (5.2% ± 0.10, p < 0.0005), as were LA and DHA concentrations (Table 3).
The omega-3 index and EPA:AA ratio showed a positive, linear relationship whereas the percent n-6 in HUFA was inversely related to omega-3 intake (Figure 2).

Baseline and second test results were obtained for 149 individuals (17.9%). In this subset, total omega-3 intake increased from 508 ± 45 mg/d at baseline to 650 ± 65 mg/d (p < 0.02) at the second test, primarily because of a significant change in omega-3 supplement intake (Table 4).
Food omega-3 intake did not change between tests. Men, but not women, reported significantly greater total omega-3 intake at the second test with this difference attributable to omega-3 supplementation. As a result, there was a significant positive change in the omega-3 index and EPA:AA ratio and a decrease in the percent n-6 in HUFA (Table 5).

Low omega-3 intakes (<250 mg/day) are estimated to contribute to 55,000 coronary heart disease deaths in the United States annually [26]. We observed an average EPA + DHA intake from food of ~250 mg/d. Similar to nationally representative U.S. [21] and Canadian data [27], <5% of the study population had an omega-3 index above 8%, the level recommended for cardiovascular health [24]. Based on published data [28], an additional 850–900 mg/d of EPA + DHA is needed to raise the omega-3 index from the 5.0% group average to 8.0%.
Omega-3 index values were significantly higher in women than men, 5.2 ± 0.1 vs. 4.8 ± 0.1, respectively (p < 0.005), as has been reported by some [17,25] but not others [29,30]. Women of reproductive age convert ALA to EPA and then DHA at higher rates than men [5]. Most (80.2% ± 1.9%) participants had percent n-6 in HUFA values below the 61% recommendation of Bibus and Lands [8]. An EPA:AA ratio above 0.3 is associated with reduced risk of cardiovascular disease [13] yet 99% ± 1% were below this target.
In the 149 subjects with two blood tests, baseline measurement of omega-3 index had a positive dietary behavior impact on 70 individuals (Adopters and Users representing 47% of the 149 tested twice). Sixty-six Non-users (44%) with a baseline omega-3 index of 4.6% continued to avoid supplements. It would be interesting to know if providing additional educational materials on health benefits of higher omega-3 index values might stimulate this cohort to change their dietary behavior. In the 53 Users (27%) using supplements at baseline and the second test, the mean omega-3 index increased from 6.3% to 6.7%, suggesting they increased their commitment to consuming sources of long chain omega-3 fatty acids. Adopters (30%) changed dietary behavior by starting to use omega-3 supplements and had the largest increase in omega-3 index with a 17% increase (4.8% to 5.6%) between tests. Increased omega-3 supplement use is expected to raise EPA + DHA concentrations [17,25]. Higher concentrations of DHA have been reported to slow the release of both AA and EPA [31] by cPLA2, possibly explaining the smaller reduction in red blood cell AA concentrations of AA observed in this study among Users and reported with high-dose DHA vs. high-dose EPA supplementation [32].
This study is limited because it is a cross-sectional workplace study. A primary goal, measuring the impact of a financial incentive, failed because coupon redemption was almost non-existent. It was surprising to us that many participants refused to take a coupon at baseline testing. The financial value, choice of retailer, and consumer-brand preference could have been factors. It is also possible that coupons may have been lost or discarded in the 7–10 day period between testing and receipt of omega-3 index results by email.

This study corroborates national surveys [21,27] of the poor omega-3 status of Americans. In this employed group of volunteers, being handed a $5 coupon 7–10 day prior to receiving nutritional assessments was not a motivator. Only 1% of coupons were redeemed. Based upon repeat measures in 149 participants, we observed that personalized nutrition assessment, i.e., knowing your omega-3 index, motivated ~50% of people (Users and Adopters) to make dietary changes and increase their average omega-3 index. Unfortunately, as reported elsewhere [33], those with the lowest nutritional status, i.e., Non-Users representing 44% of the participants, did not change their dietary behaviors after baseline nutritional assessment and their blood fatty acid concentrations corroborate this. More research is needed to understand if different financial incentives and/or additional education and guidance at baseline testing or personalized guidance included with the omega-3 index report might have a greater impact on subsequent dietary behavior, nutritional status and health outcome.

M.I.M. conceived and designed the study; J.K.B. and M.I.M. analyzed the data; M.I.M. wrote the paper; M.I.M. and J.K.B. critically reviewed the paper. 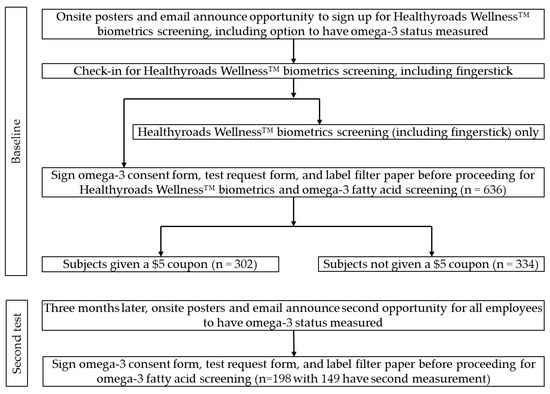 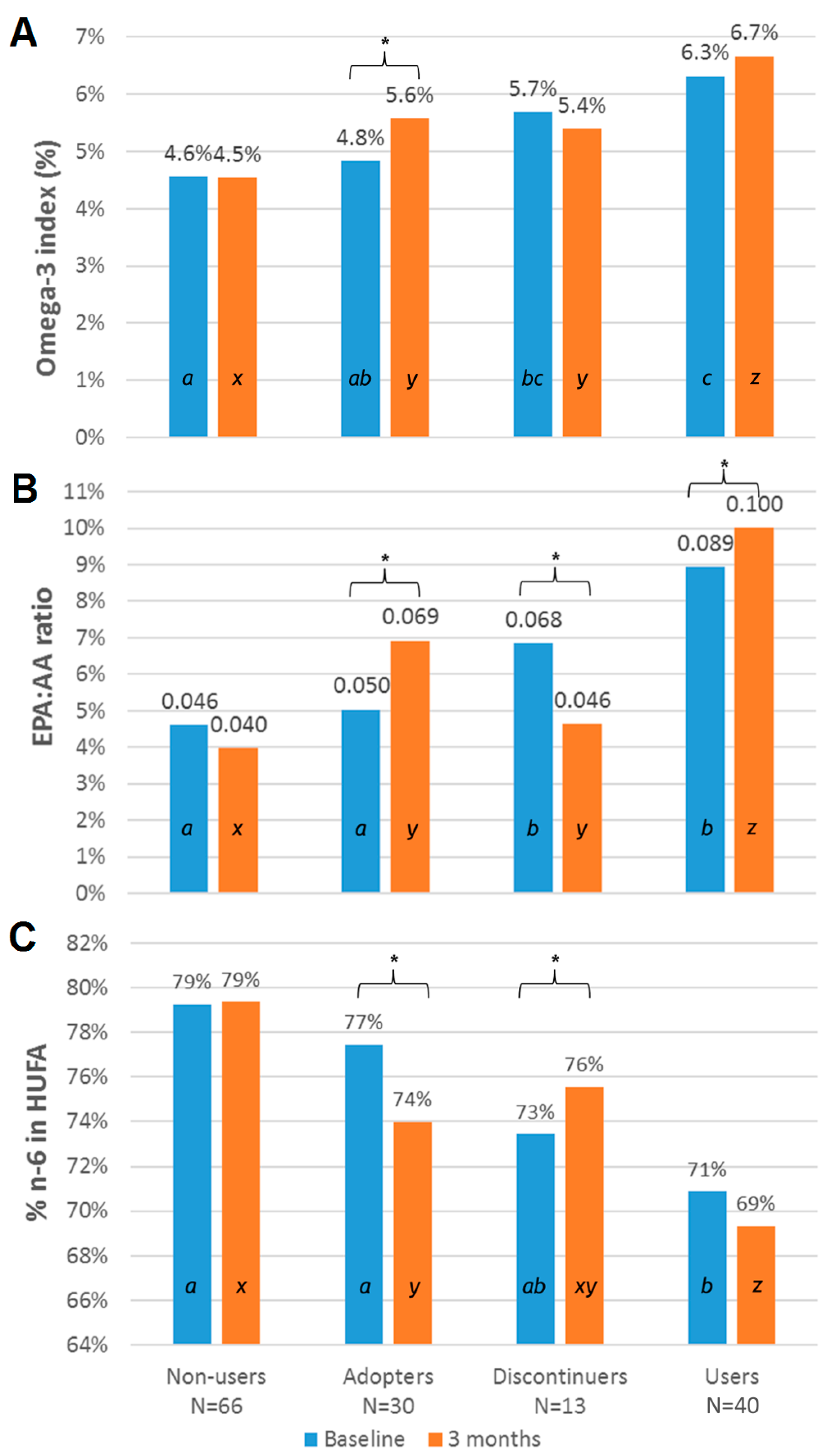