Attenuating the Biologic Drive for Weight Regain Following Weight Loss: Must What Goes Down Always Go Back Up?

The present review examined the evidence base for current popular diets, as listed in the 2016 U.S. News & World Report, on short-term (≤six months) and long-term (≥one year) weight loss outcomes in overweight and obese adults. For the present review, all diets in the 2016 U.S. News & World Report Rankings for “Best Weight-Loss Diets”, which did not involve specific calorie targets, meal replacements, supplementation with commercial products, and/or were not categorized as “low-calorie” diets were examined. Of the 38 popular diets listed in the U.S. News & World Report, 20 met our pre-defined criteria. Literature searches were conducted through PubMed, Cochrane Library, and Web of Science using preset key terms to identify all relevant clinical trials for these 20 diets. A total of 16 articles were identified which reported findings of clinical trials for seven of these 20 diets: (1) Atkins; (2) Dietary Approaches to Stop Hypertension (DASH); (3) Glycemic-Index; (4) Mediterranean; (5) Ornish; (6) Paleolithic; and (7) Zone. Of the diets evaluated, the Atkins Diet showed the most evidence in producing clinically meaningful short-term (≤six months) and long-term (≥one-year) weight loss. Other popular diets may be equally or even more effective at producing weight loss, but this is unknown at the present time since there is a paucity of studies on these diets.
Keywords: carbohydrates; protein; body composition; obesity; overweight carbohydrates; protein; body composition; obesity; overweight

Against the backdrop of the obesity epidemic and the inability of most individuals to sustain weight loss induced by calorie-restricted diets [1], alternative dietary approaches to achieve short- and long-term weight loss have become of increasing scientific interest [2]. Up until recently (2015), the Dietary Guidelines for Americans recommended that macronutrient intake consist of 45–65% of daily energy intake from carbohydrates, 20–35% from fats, and 10–35% from protein [3]. In line with these recommendations, the results of the U.S. National Health and Nutrition Examination Survey (NHANES) showed that carbohydrate consumption increased from 39% of total energy intake in 1971 to 51% in 2011. During this same time period, however, the percentage of overweight Americans also increased dramatically (from 42% to 66%) [4]. Based in part on such trends in weight gain, the creators of many popular diets (e.g., Atkins, Zone) have suggested that diets in which carbohydrate intake is significantly higher than other macronutrients are not an optimal approach for weight loss and may even contribute to weight gain. Most of these diets are published and promoted by one or more health and wellness “experts” who attest to the health and weight loss benefits observed when following their recommended diet.
Despite their popularity among the general public, the efficacy of many popular diets for weight loss has been called into question by researchers, nutrition experts, and health care professionals [5,6,7]. A meta-analysis by Johnston et al. (2014) previously attempted to answer the question of whether any popular diets were effective in producing weight loss over the short term (six months or less) and/or long term (12 months) [2]. The primary findings of this meta-analysis were that reductions in calorie intake were the primary driver of weight loss and that differences between diets differing in macronutrient composition were relatively small.
Although the findings of the Johnson et al. (2014) meta-analysis are of high importance, a potential factor confounding the interpretation of these findings was that this review included studies in which participants were specifically instructed to reduce their caloric intake and/or increase physical activity levels, beyond the recommendation of the popular diet [2]. To our knowledge, the effectiveness of specific popular diets on weight loss outcomes in dietary interventions that did not include specific calorie targets and/or structured (i.e., supervised) physical activity recommendations has not been examined. Therefore, the purpose of our review was to examine the effects of the most widely recognized popular diets of 2016, in their proposed format, on both short- and long-term weight loss outcomes in overweight and obese individuals, based on findings from clinical trials that did not include specific calorie targets, meal replacements, supplementation with commercial products, and/or structured exercise programs.

This systematic review followed the Preferred Reporting Items for Systematic Review and Meta-Analysis (PRISMA) guidelines and the protocol was prospectively registered with Prospective Register for Systematic Reviews (PROSPERO; registration number: CRD42017056770). The 2016 U.S. News & World Report Rankings for “Best Weight-Loss Diets” listed and evaluated 38 popular diets. According to the U.S. News & World Report’s “Best Diet” methodology, a panel of experts examined the research regarding each diet’s potential to produce both short-term and long-term weight loss and assigned scores and ratings accordingly. For the present review, all diets in the 2016 U.S. News & World Report rankings for “Best Weight-Loss Diets”, which did not involve specific calorie targets, meal replacements, supplementation with commercial products, and/or were not categorized as “low-calorie” diets were examined. Based on these criteria, a total of 20 out of 38 diets were included in this review. All 38 diets are summarized according to diet type in Table 1. More information on the theories and guidelines of each of the eligible 20 popular diets is available online in the Health section of the U.S. News & World Report’s website under “Best Diets”.

Literature searches were conducted by two separate individuals on each of the 20 eligible diets on PubMed through the National Center of Biotechnology Information, The Cochrane Database of Systematic Reviews (CDSR), the Cochrane Central Register of Controlled Trials (CENTRAL), and Web of Science until September 2016.

The search terms included the diet name (e.g., “Atkins Diet”), “overweight or obesity”, and the word “weight”. Through PubMed, filters were set to allow only “clinical trials,” “human” studies, and “English” studies to be displayed between 1980 and September 2016. Our preset inclusion criteria were the following: (1) interventional clinical trials; (2) sample sizes of at least 15 per group; (3) intervention periods of 12 weeks or longer; (4) inclusion of adult participants (>18 years) with a body mass index (BMI) ≥25 kg/m2; (5) objective measures of body weight pre- and post-intervention; and (6) articles written in the English language. For the purposes of this review, clinical trials of between three and six months in duration were considered short-term, and clinical trials one year or longer were considered long-term (no studies were longer than six months but less than one year). Clinically meaningful or “successful” weight loss was defined as weight loss that was equivalent to 5% or more of participants’ baseline weight [17,18]. All identified clinical trials met our short- and long-term criteria listed above.

Each dietary intervention had to exclusively follow the dietary guidelines of the diet of interest. If the participants were provided with a specific menu or modified version of the diet, then these studies were excluded. Clinical trials with dietary interventions that had explicit calorie targets and/or structured physical activity components were excluded. We chose not to include these studies because specific caloric targets and/or supervised exercise programs are likely to produce weight loss and thereby confound potential effects of popular diets on weight loss outcomes.

The PubMed search was conducted in the following manner: (each diet name) AND (weight OR (body mass) OR (body mass index)) AND (overweight OR obesity). Limits were humans, clinical trial, adult, and English. The preferred Reporting Items for Systematic Reviews diagram displaying the process flow is presented in Figure 1.
Three authors (A.H., K.H. and H.M.) extracted data from each paper independently and compared their findings for discrepancies. Any discrepancies were reviewed and resolved by a senior author (SDA). All authors reviewed final candidate papers to verify and agree that they met the inclusion criteria.

The mean weight change and 95% confidence interval (CI) for the findings of each eligible study were extracted for this review. A number of studies reported only the baseline and post-treatment means. In these cases, estimated standard deviation and 95% CI were calculated (Supplementary Materials).

Three authors (A.H., K.H. and H.M.) independently assessed each study for the assignment of ratings of low, unclear, or high risk of bias related to the selection, performance, detection, attrition, reporting and other potential sources of bias by using the Cochrane Collaboration Handbook guidelines [19]. Items that were not rated the same were discussed until a consensus was reached.

Using the systematic search terms listed above with the limited filter criteria, 1633 articles were identified. Figure 1 displays a flow diagram of the literature search results. However, relatively few of these studies met all of the preset inclusion criteria. The most common factors for exclusion were the following: (1) study did not have a dietary intervention; (2) intervention failed to follow diet guidelines (e.g., the intervention had explicit calorie restriction guidelines/specific calorie targets or changed the macronutrient guidelines or the established guidelines of the diet of interest); (3) limited length of dietary interventions; (4) ineligible participant demographics (e.g., participants’ BMI <25 kg/m2, <18 years of age, disease); (5) small sample sizes (n <15); (6) intervention had structured physical activity/exercise components; (7) article did not report weight changes; (8) article was not the original study; and (9) there was not a full-text article available.

There were a higher proportion of women than men enrolled in most of the studies (Table S1). The age ranged between 18 and 70 years, and the BMI ranged between 25 and 44 kg/m2.

A couple of studies did not report the recruitment and randomization process, but simply stated that the participants were randomized (Table S2). All studies specified the eligibility criteria. Participant completion rates varied widely across studies (range = 16% to 97%). A couple of articles did not use the intention to treat analysis, and thus the attrition bias in these studies is unclear. Another source of potential bias is that most studies did not include a control diet.

One short-term clinical trial was available for the DASH Diet [30]. In this clinical trial, conducted by Blumenthal et al. (2010), 46 overweight and obese adults (age ≥ 35 years and BMI 25.0–40.0 kg/m2) with high blood pressure were randomized to the DASH Diet alone or the DASH diet with aerobic exercise and caloric restriction for a four-month time period. After four months, participants in the DASH Diet alone group maintained their weight, with an average weight change of 0.3% (−0.3 kg, 95% CI: −1.2 to 0.5 kg). Participants’ dietary energy was 19.4% protein, 53.8% carbohydrate, and 27.8% fat.

The following are available online at www.mdpi.com/2072-6643/9/8/822/s1, Table S1: Characteristics of selected articles; Table S2: Assessment on the risk of bias; Figure S1: Summary of study-level risk of bias assessment.

The authors report no conflicts of interest. The funders had no role in the design or conduct of the study; analysis or interpretation of the data; or preparation, review, or approval of the manuscript. 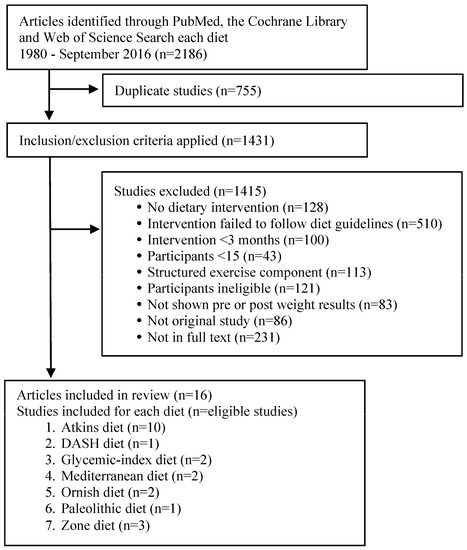 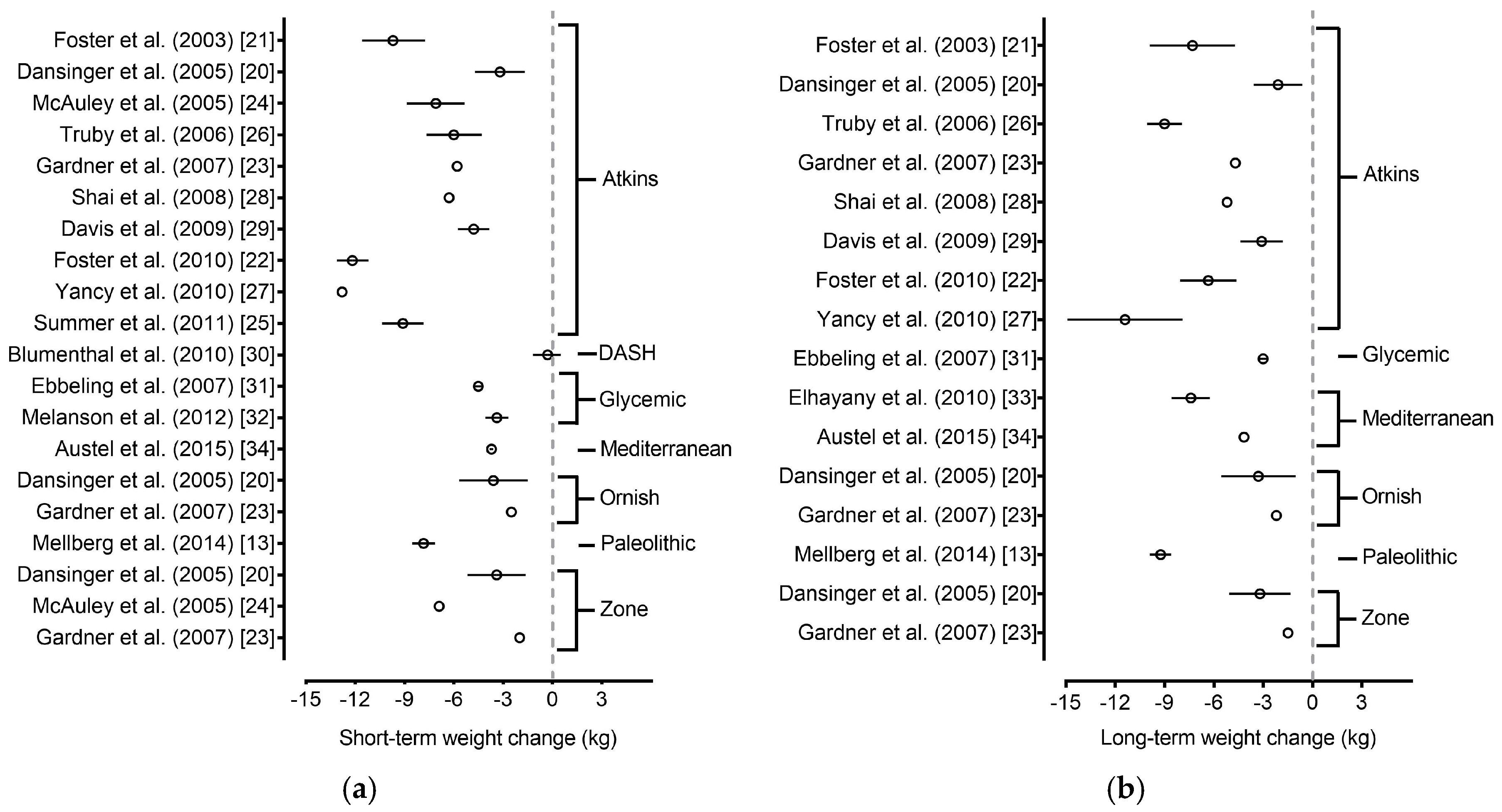 Table 2. Short- and long-term weight loss outcomes among eligible diets.
Table 2. Short- and long-term weight loss outcomes among eligible diets.
Mo, months, Base, baseline. Short- and long-term weight change showed mean ± standard deviation (SD). Short-term assessment period is less than six months; long-term is more than 12 months. Age and body mass index (BMI) were shown mean ± SD or range. † Data combined from two cohorts that underwent the same intervention for either four or six months. * Participants were given the option to continue the diet to which they were allocated for an additional six months (making the total dietary intervention 12 months).
© 2017 by the authors. Licensee MDPI, Basel, Switzerland. This article is an open access article distributed under the terms and conditions of the Creative Commons Attribution (CC BY) license (http://creativecommons.org/licenses/by/4.0/).
We use cookies on our website to ensure you get the best experience. Read more about our cookies here.
Accept
We have just recently launched a new version of our website. Help us to further improve by taking part in this short 5 minute survey here. here.
Never show this again