Synergistic Interplay between Curcumin and Polyphenol-Rich Foods in the Mediterranean Diet: Therapeutic Prospects for Neurofibromatosis 1 Patients
Previous Article in Journal

Caffeine, one of the main components in green tea, can interfere with sleep and block the effect of theanine. Since theanine, the main amino acid in tea leaves, has significant anti-stress effects in animals and humans, we examined the effects of green tea with lowered caffeine content, i.e., low-caffeine green tea (LCGT), on stress and quality of sleep of middle–aged individuals (n = 20, mean age 51.3 ± 6.7 years) in a double-blind crossover design. Standard green tea (SGT) was used as the control. These teas (≥300 mL/day), which were eluted with room temperature water, were consumed over a period of seven days after a single washout term. The level of salivary α-amylase activity (sAA), a stress marker, was significantly lower in participants that consumed LCGT (64.7 U/mL) than in those that consumed SGT (73.9 U/mL). Sleep quality was higher in participants that consumed a larger quantity of LCGT. In addition, a self-diagnostic check for accumulated fatigue was significantly lower in those participants that consumed LCGT than SGT. These results indicate that LCGT intake can reduce stress in middle-aged individuals and improve their quality of sleep. The reduction in caffeine is suggested to be a valid reason for enhancing the anti-stress effect of green tea. View Full-Text
Keywords: anti-stress effect; caffeine; green tea; middle-aged individuals; salivary α-amylase; sleep anti-stress effect; caffeine; green tea; middle-aged individuals; salivary α-amylase; sleep
►▼ Show Figures 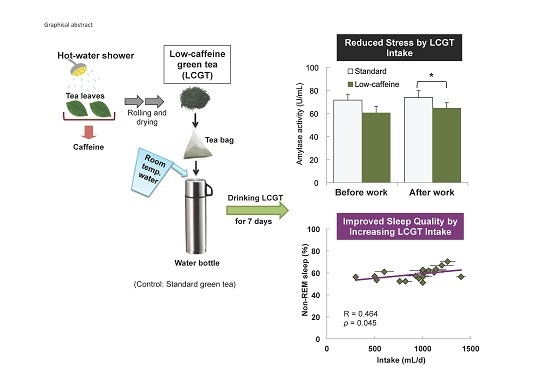