The prevalence of cataract is high among elderly individuals, and it is the primary cause of blindness worldwide [1]. The number of people with age-related cataract has been predicted to increase dramatically in the next 20 years worldwide, especially in Western countries, because of the increasing life expectancy [2]. The only available treatment to restore vision after cataract formation is via intraocular surgery, and this imposes a major medical cost and heavy workload burden on the health care systems [3].
Oxidative stress is believed to be involved in the formation and maturation of cataract, causing damage to the proteins and lipids of the lens epithelium [4,5,6]. Age, ultraviolet light exposure, smoking, and corticosteroid use are recognized risk factors associated with cataract formation [7,8]. Besides other risk factors such as abdominal obesity [9] and hormonal therapy [10], the production of proinflammatory components increases the levels of free oxygen radicals [11,12], which have been associated with an increasing risk of cataract.
A significant and growing body of observational research suggests that an appropriate nutritional intervention may offer a way to decrease the risk of cataract [13]. Accordingly, the association between cataract progression and nutritional exposure is a matter of great scientific interest. Recently, an inverse association between the total antioxidant capacity (TAC) and the risk of age-related cataract has been reported [8]. In some trials, free oxygen radicals have been identified as one of the most important causes of cataract formation [10]. A fair number of cohort studies have focused on assessing the association between the intake of several specific nutrients in the diet and cataract formation [11,12,13,14,15,16,17,18,19]. In some of those studies, an antioxidant-rich diet was reported to potentially delay cataract progression [20]; other studies have reported that healthier diets could prevent cataract formation [21,22,23,24,25]. Some nutritional supplements, including different antioxidants [26], lutein/zeaxanthin [27,28,29,30] and omega-3 [31] and omega-6 [32] fatty acids, have been suggested to reduce cataract progression.
The Mediterranean diet (MedDiet) is recognized as one of the healthiest dietary patterns and has proven beneficial for several health outcomes [33,34]. However, no randomized trial to date has assessed the long-term effect of a MedDiet on the risk of cataract development in a large population of elderly subjects. We hypothesized that two MedDiets, one enriched with extra-virgin olive oil (EVOO) and another with mixed nuts, rather than a low-fat control diet could decrease the incidence of cataract surgery in a population at a high risk of cardiovascular disease (CVD) enrolled to the Prevención con Dieta Mediterránea (PREDIMED) trial.

The analysis was conducted within the framework of the PREDIMED study (www.predimed.es) [35], a parallel-group, randomized, primary CVD prevention trial in persons at high risk of CVD. The main results of the trial related to the primary cardiovascular endpoint have been published elsewhere [36]. The study was conducted in accordance with the Declaration of Helsinki. The Institutional Review Board of the respective recruitment centers approved the study protocol and all participants gave their informed consent. Trial Registration: clinicaltrials.gov Identifier: ISRCTN35739639.

Participants were men (age range: 55–80 years) or women (age range: 60–80 years) initially free of CVD. The inclusion criteria were the presence of either type 2 diabetes or ≥3 major cardiovascular risk factors, including current smoking (>1 cigarette/day during the last month), hypertension (systolic BP ≥140 mmHg or diastolic BP ≥90 mmHg or under antihypertensive medication), LDL cholesterol ≥160 mg/dL or receiving lipid-lowering therapy, HDL cholesterol ≤40 mg/dL in men or ≤50 mg/dL in women, body mass index (BMI) ≥25 kg/m2, and a family history of premature coronary heart disease [35].
The exclusion criteria were a previous history of CVD (i.e., a previous medical diagnosis of acute myocardial infarction, stroke, or peripheral arterial disease), any severe chronic illness, immunodeficiency or human immunodeficiency virus positivity, illegal drug or alcohol abuse, history of allergy to olive oil or nuts, and low predicted likelihood of changing dietary habits according to the Prochaska and DiClemente stages of change model [35].
In total, 7447 participants were enrolled in the PREDIMED study. The selection process started by extracting the names of potential participants from the records of around 200 primary care centers (PCCs) affiliated with 11 Spanish teaching hospitals between October 2003 and January 2009. The clinical records of these participants were then individually reviewed to exclude those who did not meet the eligibility criteria. Potential participants were approached by the PCCs via a telephone call or during their clinical visits. If the candidates were interested in participating, a face-to-face interview was scheduled. During this interview, the purpose and characteristics of the study were explained, and signed informed consent was obtained from willing participants. A brief explanation of the study, including the possibility that they might receive free allowances of EVOO or nuts for the duration of the trial, was given at this first visit [35].

Once entered into the study, the participants were randomly assigned in a 1:1:1 ratio to one of the following three intervention groups: (1) MedDiet supplemented with EVOO (MedDiet + EVOO); (2) MedDiet supplemented with mixed nuts (MedDiet + Nuts); or (3) a control diet (a low-fat diet according to the American Heart Association guidelines applicable as of 2002). The two groups allocated the MedDiets received intensive education to follow the MedDiet and supplemental foods at no cost. EVOO (1 L/week for the participant and his/her family) was provided to the MedDiet + EVOO group, and mixed nuts (30 g/day; 15 g walnuts, 7.5 g hazelnuts, and 7.5 g almonds) were provided to the MedDiet + Nuts group. The participants in the control group did not receive education on the MedDiet, but were adviced to follow a low-fat diet [35].
Randomization was performed centrally by means of a computer-generated random-number sequence. Investigators and members of all committees were blinded to the treatments assigned to individual participants. In the present analysis, our main objective was to determine the effect of the three dietary interventions on the incidence of cataract surgery.

At baseline and during the yearly follow-up visits, all participants underwent clinical evaluations with their general practitioners. In addition they completed a 14-item questionnaire to assess adherence to the MedDiet; a 77-item general questionnaire about lifestyle variables, educational achievement, history of illnesses (including cataract surgery), and medication use; a 137-item validated food-frequency questionnaire [36]; and a validated Spanish version of the Minnesota Leisure-Time Physical Activity Questionnaire.
Biomarkers of adherence to the MedDiet interventions were measured in a random sample of PREDIMED participants during the first 5 years of follow-up, and included urine hydroxytyrosol concentrations and plasma α-linolenic acid proportions, which are reliable biomarkers of EVOO and walnut intake, respectively [36]. General practicioners and laboratory technicians were blinded to the participants’ intervention groups.

The outcome we investigated was the occurrence of cataract surgery at any time throughout the study period. Cataract surgery (externally confirmed by an independent Adjudication Committee blinded to the intervention and to the dietary habits of the participants) was a prespecified secondary outcome of the PREDIMED trial. Patients with cataract surgery in any eye present at baseline were excluded from the analyses. For the assessment of incident cataract surgery during the follow-up period, the participants visited their general practitioners yearly for clinical evaluations and completed several questionnaires, including a general medical questionnaire recording changes in the health status and, specifically, if they had undergone cataract surgery. The cataract surgery outcome was defined by the medical diagnosis made by an ophthalmologist, and was explicitly reported in the medical charts. The occurrence of cataract surgery was also confirmed by periodically reviewing the computer-based records of the corresponding PCCs. These reports and all relevant documentation, including medical records made by the ophthalmologist, were sent to the PREDIMED members of the Clinical Adjudication Event Committee, who were blinded to the interventions. As cataract extraction was a predefined secondary endpoint in the trial, the Adjudication Committee reviewed the medical charts comprehensively for potential cataract extraction, and only definitively confirmed cases were included in this analysis. Cases of traumatic cataracts and cases that appeared after another intraocular surgery, such as vitrectomy or glaucoma surgery, were also excluded. In cases of bilateral surgery in the same patient, only the first event was considered in our time-to-event analyses. Our analyses focused on a subset of 5802 participants from the PREDIMED trial who had not undergone cataract surgery at baseline: 1998, 1914, and 1890 participants were allocated to the MedDiet + EVOO, MedDiet + Nuts, and control diet groups, respectively. The remaining 1645 participants enrolled in the PREDIMED study were excluded because they had undergone cataract surgery before the beginning of the trial.

Baseline differences between the three dietary intervention groups were tested using analysis of variance or chi-squared tests, and results were expressed as means ± SD or numbers (percentages), respectively. The normality of variables was examined by using the Kolmogorov-Smirnov test. All analyses were performed on the basis of an intention-to-treat principle.
Person-time of follow-up was calculated as the interval between the randomization date and the earliest date of the follow-up contact at which a new cataract surgery was recorded, or the last visit or death, whichever came first.
We used unadjusted, age- and sex-adjusted, and multivariable time-dependent Cox proportional hazard models to assess the effect of the two MedDiet interventions on the incidence of cataract surgery in comparison with the control group. Hazard ratios (HRs) and 95% confidence intervals (CIs) were calculated using the control group as the reference. In multivariable models, we adjusted the estimates for the following confounders: age, sex, baseline type 2 diabetes, baseline hypertension, baseline BMI (4 categories), and smoking status (3 categories). All models were stratified by recruitment center. Prespecified interactions with sex, age, or baseline type 2 diabetes were tested using the likelihood ratio test in fully adjusted models. A fully adjusted multivariable analysis was repeated after both the MedDiet groups were merged into a single category for comparison with the control group. The assumption of proportional hazards was tested by analyzing the scaled Schoenfeld residuals, and it was not violated (p > 0.50). The test for time-varying covariates also suggested that the assumption of proportional hazards was met. We also used the Kaplan-Meier method to graphically estimate the cumulative incidence of cataract surgeries. A 2-tailed p value < 0.05 was considered statistically significant. In addition, we performed prespecified subgroup analysis within the strata of age, sex, and BMI. Analyses were performed using IBM SPSS Statistics for Windows Version 19.0 (IBM Corp., Armonk, NY, USA) and Stata 12.0 (StataCorp, College Station, TX, USA).

In summary, the results of our analysis do not support that a MedDiet supplemented with EVOO or nuts may reduce the incidence of cataract surgery when compared to a low-fat diet in a population at a high risk of CVD. However, the present results should be interpreted with caution because the absence of evidence does not indicate the lack of evidence of an effect. Further studies on a healthy population, taking into account alternative definitions of the outcome, are needed to investigate the association between the MedDiet and age-related cataract and to determine whether the MedDiet could have a potential preventive role in cataract.

The Fundación Patrimonio Comunal Olivarero and Hojiblanca SA (Málaga, Spain), California Walnut Commission (Sacramento, CA, USA), Borges SA (Reus, Spain), and Morella Nuts SA (Reus, Spain) donated the olive oil, walnuts, almonds, and hazelnuts, respectively, used in the study. None of the funding sources played a role in the design, collection, analysis or interpretation of the data, or in the decision to submit the manuscript for publication. CIBEROBN is an initiative of ISCIII, Spain. 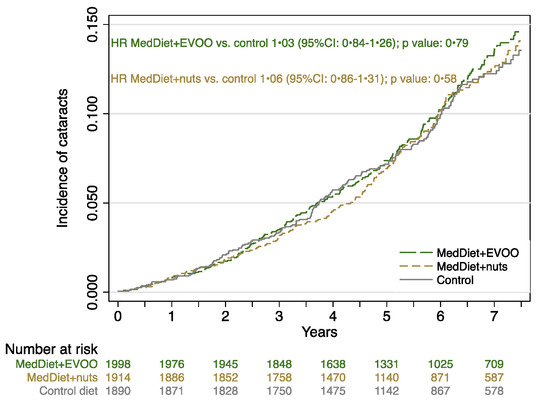