Glucose Plus Fructose Ingestion for Post-Exercise Recovery—Greater than the Sum of Its Parts?

James A. Betts
1 and 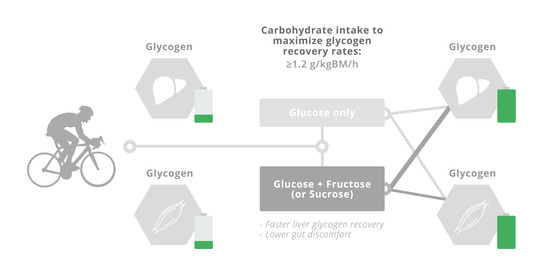 Dietary carbohydrates come in many forms, comprising monosaccharides such as glucose, fructose and galactose; disaccharides such as maltose, sucrose and lactose; and polysaccharides such as maltodextrin and starch (Table 1). The rates of digestion, intestinal absorption and hepatic metabolism of carbohydrates are key determinants of carbohydrate delivery to skeletal muscle tissue. These factors are therefore important considerations when choosing a nutritional strategy to optimize carbohydrate delivery during and after exercise.
Glucose is a constituent of most disaccharides and polysaccharides and is therefore the most ubiquitous carbohydrate in most people’s diets (Table 1). Glucose is also the primary cellular fuel source in almost all human tissues. Carbohydrates must first be hydrolysed into their constituent monomers before being absorbed across the intestine and entering the systemic circulation [23]. Therefore, most dietary carbohydrates are broken down into glucose, fructose and/or galactose prior to their subsequent absorption. The major intestinal absorption route of glucose involves sodium-dependent glucose transporter 1 (SGLT1), which transports glucose from the intestinal lumen into the enterocyte [23]. Other putative routes include transport by glucose transporter 2 (GLUT2) and GLUT12, although these are yet to be clearly established in humans [24], and are likely to play only minor roles in intestinal glucose absorption [23]. Whilst fructose has an identical chemical formula to glucose (C6H12O6), glucose has an aldehyde group at position 1 of its carbon chain, whereas fructose possesses a keto group in position two of its carbon chain [25]. A notable difference in the handling of fructose compared to most other carbohydrates is the primary intestinal transport protein responsible for transporting fructose from the intestinal lumen to within the enterocyte: GLUT5 (Table 1). Other fructose transporters may also be involved in fructose absorption, but again are likely to play minor roles in comparison to GLUT5 [22].
When ingested alone, the hydrolysis of most carbohydrates is rapid and does not limit the rate of digestion and absorption. Therefore, the rate at which glucose polymers such as maltose, maltodextrin and starch can be digested, absorbed and used as a fuel source is not substantially slower than that of glucose [26,27,28]. Furthermore, the hydrolysis of sucrose (by sucrase) is also rapid and exceeds the rate of intestinal absorption of glucose and fructose [29]. An exception to this rule is isomaltulose. Due to the different bond linking glucose and fructose, the hydrolysis rate of isomaltulose (by isomaltase) is drastically slower than that of sucrose [20,30]. Isomaltulose thereby produces a lower glycaemic and insulinaemic response following ingestion, and suppresses fat oxidation to a lesser extent than sucrose [31]. However, presumably due to this slow rate of digestion and absorption, isomaltulose exacerbates gastrointestinal distress when consumed in large amounts during exercise [32].
After intestinal absorption, the metabolism of various dietary carbohydrates also differs. In contrast to glucose, which can bypass the liver and enter the systemic circulation, fructose and galactose are almost completely metabolised upon first pass of the liver [25,33]. This splanchnic sequestration appears to be enhanced by the co-ingestion of glucose [33]. Fructose and galactose are converted in the liver into glucose, lactate, glycogen and lipids, which subsequently appear in the circulation [25,33]. The energy cost of converting fructose into glucose and other substrates is likely to account for the greater postprandial thermogenesis seen with fructose versus glucose ingestion [34]. Because of this hepatic metabolism, the blood glucose and insulin responses to fructose or galactose ingestion are attenuated when compared to glucose ingestion [35,36]. This lower insulin response may have implications for glycogen storage in recovery from exercise.
Hepatic fructose metabolism also differs from hepatic glucose metabolism in its regulation by insulin. Both glucose and fructose enter the liver via the insulin-independent transporter, GLUT2. However, hepatic glucose metabolism is then regulated by insulin and the cellular energy status [5,25]. Insulin, ATP and citrate concentrations regulate glucose flux to pyruvate via modulating the activity of hexokinase IV and glycolytic enzymes [37]. Hepatic fructose metabolism on the other hand, is independent of insulin and does not display negative feedback inhibition by ATP nor citrate [25].

5. Glucose–Fructose Co-Ingestion and Recovery from Exercise

The rapid recovery of both muscle and liver glycogen stores after prolonged exercise are important determinants of the capacity to perform a subsequent bout of moderate- to high- intensity exercise. The repletion of liver and muscle glycogen stores is limited by the systemic availability of carbohydrates and glucogenic precursors, along with insulinaemia, the balance of which varies depending on the scenario. The rate of appearance of ingested glucose in the circulation appears to be limited by the capacity of intestinal transporters. Since intestinal fructose absorption utilises a different transport mechanism, combining the ingestion of fructose and glucose takes advantage of both transport mechanisms, thereby increasing the total capacity to absorb carbohydrates. Post-exercise muscle glycogen repletion rates can be maximised by frequent ingestion of carbohydrate throughout recovery at a rate of ≥1.2 g·kg body mass−1 every hour, with no further acceleration of glycogen repletion rates if fructose (or sucrose) forms part of the ingested carbohydrate. However, when sufficient carbohydrate is consumed to maximise muscle glycogen replenishment after exercise, the ingestion of glucose plus fructose (sucrose) can minimise gastrointestinal distress. The combined ingestion of glucose plus fructose (or sucrose) during post-exercise recovery strongly enhances liver glycogen repletion rates, but there is currently insufficient evidence to provide guidelines on the carbohydrate ingestion rates required to specifically maximize liver glycogen repletion. When rapid recovery from prolonged exercise is a key objective, and maximal performance is required within 24 h, it is advised to consume more than 1 g carbohydrate−1·kg body mass−1·h−1, starting as soon as possible after exercise and at frequent intervals thereafter (i.e., every 30 min). When ingested in the form of glucose–fructose mixtures (or sucrose), not only is this ingestion rate more tolerable due to lower gut discomfort but total body glycogen status can also be enhanced over glucose (polymer) ingestion alone, due to greater liver glycogen repletion.