Does the Valuation of Nutritional Claims Differ among Consumers? Insights from Spain
Next Article in Special Issue

Proteins in Soy Might Have a Higher Role in Cancer Prevention than Previously Expected: Soybean Protein Fractions Are More Effective MMP-9 Inhibitors Than Non-Protein Fractions, Even in Cooked Seeds
Previous Article in Journal

The effectiveness for vasomotor symptoms and sleep disorders plus the long-term safety of a nutraceutical combination of agnus-castus and magnolia extracts combined with soy isoflavones (SI) and lactobacilli were assessed in postmenopausal women. A controlled study was carried out in menopausal women comparing this nutraceutical combination (ESP group) with a formulation containing isoflavones alone (C group) at the dosage recommended. The Kuppermann index, The Pittsburgh Sleep Quality Index (PSQI), and Short Form 36 (SF-36) were determined at baseline, three, six and 12 months. Endometrial thickness, mammary density and liver function were evaluated at baseline and after 12 months. One hundred and eighty women were enrolled in the study (100 in the ESP group and 80 in the C group). At the end of the treatment, mammary density, endometrial thickness, and hepatic function did not show substantial differences between groups. The Kuppermann index and particularly the tendency for hot flashes progressively and significantly decreased in frequency and severity during ESP versus C treatment. At the same time, a significant increase in sleep quality and psychophysical wellness parameters was observed in the ESP versus C groups. No adverse events were observed. Agnus-castus and magnolia, combined with SI + lactobacilli, can effectively and safely be used in symptomatic postmenopausal women, mainly when quality of sleep is the most disturbing complaint. The endometrium, mammary glands and liver function were unaffected after 12 months of treatment. View Full-Text
Keywords: isoflavones; menopause management; endometrial thickness; mammary density; liver function; plant extracts isoflavones; menopause management; endometrial thickness; mammary density; liver function; plant extracts
►▼ Show Figures 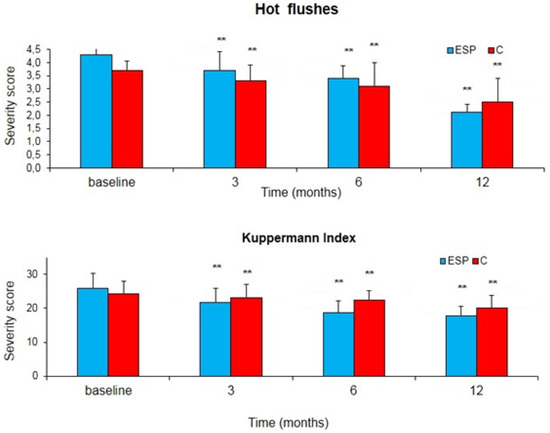