:
Background: β-Hydroxy-β-methylbutyrate-free acid (HMB-FA) has been ingested prior to exercise to reduce muscle damage, however the effects of HMB-FA supplementation on hormonal, strength and power adaptation are unclear. Methods: Sixteen healthy men were matched and randomized into two groups and performed six-week resistance training while supplementing with either HMB-FA or placebo (3 g per day). The subjects were evaluated for 1 repetition maximum (1RM) bench press and leg press and vertical jump (VJ) prior to and after training intervention. In addition, blood samples were obtained before and after resistance training to evaluate resting growth hormone (GH), insulin like growth factor 1 (IGF-1), testosterone (TEST), cortisol (CORT), and adrenocorticotropic hormone (ACTH) responses. The HMB-FA supplementation group showed greater gains compared with the placebo group in peak power (effect size ES = 0.26 vs. 0.01) and 1RM leg press (ES = 1.52 vs. 0.96). In addition, the HMB-FA supplementation group indicated greater decrements in ACTH and CORT responses to training in comparison to the placebo group (p < 0.05). Likewise, in GH (ES = 1.41 vs. 0.12) and IGF-1 (ES = 0.83 vs. 0.41), the HMB-FA indicated greater training effects when compared with the placebo group. Conclusions: These findings provide further support for the potential anabolic benefits associated with HMB-FA supplementation.
Keywords:
HMB free acid; supplementation; muscle mass; sports nutrition

Initially, twenty healthy subjects volunteered to participate for the study, but four subjects did not continue training, thus 16 of them completed the whole six-week investigation and testing sessions (Table 1). A priori calculations of statistical power indicated that this sample size was appropriate to satisfy power at or above 80% [19]. The subjects were free from any lower and upper body injuries, and had no history of musculoskeletal, neurological, or orthopedic disorders that might have affected their inclusion to resistance training. Subjects were not permitted to use any nutritional supplements or medications while enrolled in the study. Screening for nutritional, drug and hormonal supplements was accomplished via a health-history questionnaire, completed during participant recruitment. Subjects were informed about the potential risks and discomforts associated with the investigation, and all subjects gave their written, informed consent to participate. The Ethics Committee of the University approved the study (DT-167908).

The present study is a longitudinal research with the placebo-controlled, double-blind, randomized design. Two weeks prior to the initiation of resistance training period, all subjects were familiarized with the testing and training procedures. During this session, subjects’ anthropometric measurements were determined and the subjects completed a familiarization session with equipment, resistance training room and proper strength and power tests. To standardize the training procedures, a one-week orientation took place consisting of two sessions in which the methods and techniques of the training programs were demonstrated. Each subject performed at least five familiarization sessions and participated in a preconditioning program before the commencement of the intervention. Strength and power measurements were taken one week before and after intervention, completed in two non-consecutive days and were always administered in the same order, at the same time of the day and by the same investigators. On Day 1, height, weight and countermovement jump were measured. On Day 2, 1 repetition maximum (1RM) of leg press and bench press were measured. Forty-eight hours prior to and after completing the training period, blood samples were taken to determine resting hormone levels.

All performance testing sessions were conducted at the same time of day (i.e., afternoon) to account for diurnal performance effects that have typically been noted when assessing markers of strength and power by Certified Strength and Conditioning Specialists. Before testing, each subject performed ten minutes of standard warm-up.

For the upper and lower body strength, bench and leg press exercises were measured with a series of 1RM tests using free weights (Nebula Fitness, Inc., Versailles, OH, USA) as previously described [20]. Briefly, participants performed a warm-up on a cycle ergometer followed by light dynamic stretching. In the next step, participants performed 8–10 repetitions at 50% of estimated 1RM, followed by another set of 3–5 repetitions at 85% of 1RM. Three to four maximal trials separated by 2–3 min of rest were used to determine individual 1RM for each resistance exercise. For the countermovement jumps, participants executed maximal effort jumps without arms akimbo. The participants were instructed to flex their knees until 90° and completed three maximal countermovement vertical jumps each separated by a 30 s rest period, according to previously established methods [21]. The participants were instructed to maximize jump height. To estimate vertical jump peak power (W), a previously established testing protocol and equation (W = 0.67 × jump height (cm) + 45.3 × body mass (kg) − 2.055) was used [22].

Blood samples were drawn (10 mL) from the antecubital vein into plain evacuated test tubes at rest between 8:00 and 9:00 a.m. before and after resistance training to evaluate resting growth hormone (GH), insulin-like growth factor 1 (IGF-1), testosterone (TEST), cortisol (CORT), adrenocorticotropic hormone (ACTH), creatinine and urea responses to the training period. The blood was allowed to clot at room temperature for 30 min and centrifuged at 1500× g for 10 min. The serum layer was removed and frozen at –80 °C in multiple aliquots for further analyses. Resting blood samples were drawn at 48 h before the start of training (pre) and 48 h after the last training session (post), after a 10 h fast and after 8 h of sleep to control of the circadian hormonal range. The time of blood collection was chosen based on the previous studies conducted with these procedures for the control of the circadian hormonal range [23]. All analyses were performed by radioimmunoassay (RIA) method with standardized procedures using commercially available kits (Monobind, Inc. Lake Forest, CA, USA). The intra-assay variance was determined based upon a coefficient of variation (CV) <6%. Serum concentrations of creatinine (Cr) and urea were measured using an automated analyzer (Model 747-400, Hitachi, Tokyo, Japan).

The HMB-FA supplement consisted of 1 g of β-Hydroxy-β-methylbutyrate-free acid (BetaTor, Body Attack, GmbH & Co. KG, Waldhofstrabe 19, 25474, Ellerbek, Germany). Each serving of placebo consisted of an equivalent amount of polydextrose. Participants consumed either the supplement or placebo 3 times per day. A serving size of 1 capsule (1 g) at each meal was used. The placebo was indistinguishable in appearance and taste and was provided in the same form as the supplement. The HMB-FA supplement time points on training day were during breakfast, 30 min prior to exercise, and supper. Likewise, on non-training days, the participants were instructed to consume one serving with each meal throughout the day. Participants were required to consume three servings per day were provided with weekly supplies of HMB-FA and placebo. Participants were required to return all used and unused packets at the end of each week. The compliance for the supplement ingestion was 100%.

Participants were prevented to take nutritional supplements or any drugs which promotes performance for at least 6 months before data collection. Participants completed 3-day diet records at pre-training and during the last week of training period. Food diaries were analyzed for energy and macro/micronutrient content and the participants had similar caloric intake regarding 25% protein, 50% carbohydrates and 25% fat. After the first 3-day diet record, but before the onset of the training period, participants received dietary counseling by a registered dietitian to ensure that the participants maintained their habitual dietary habits during the study (Table 2).

The resistance training protocol consisted of a 6-week (12 sessions) program. Each session lasted 70–80 min. Ten minutes of standard warm-up (i.e., 5 min of submaximal running and several displacements and stretching exercises for 5 min) was used before the main part of the training session. The resistance exercise program stressed major muscle groups and included the following exercises (or variations of) in each session: leg presses, knee flexions, knee extensions, lat pull downs, bench presses, shoulder presses, cable biceps curl and triceps push-downs which participants performed 3 sets of 8–12 repetitions at 75–85% of 1RM with 2 and 3 min rest intervals between sets and exercises, respectively. Weight was increased systematically if the prescribed amount of repetitions were completed. All participants in the present study were required to complete all training and each training session was monitored by Certified Strength and Conditioning Specialists to ensure that all training exercise sessions were performed correctly with the appropriate loads and rest intervals. Make up sessions were allowed if subjects missed a regularly scheduled training session; therefore, participants’ compliance in this study was 100% for the chronic training protocol.

Pre- and post-values for the dependent variables were analyzed to determine if the distributions were normal using the Shapiro-Wilk Normality test. A 2 (group) by 2 (time) repeated measures ANOVA was utilized to analyze changes in the dependent variables measured at baseline and after 6 weeks of supplementation and resistance training. The calculation of effect size was used to examine the magnitude of any treatment effect. The effect size statistics was considered: trivial, <0.20; small, 0.20–0.50; moderate, 0.5–0.80; large, 0.8–1.30; or very large >1.30 [24]. The effect size is reported in conjunction with the 95% confidence interval (CI) for all analyzed measures. Pearson product-moment correlations coefficient was used to determine relationships between performance variables and hormonal changes (n = 16). Statistical significance was set at p ≤ 0.05 for these analyses. All values are presented as mean ± standard deviation (SD). All analyses were conducted using SPSS version 21.0 (SPSS Inc., Chicago, IL, USA).

We gratefully acknowledge the volunteers involved in this study. We also thank our laboratory team for technical assistance with the immunoassay procedures and Asghar Abbasi, University of California, Irvine, for English editing.

The authors’ contributions were as follows: All authors designed the research. A.A. and H.A. conducted the research including sample analysis. A.A. analyzed the data and wrote the paper. All authors read and approved the final manuscript. 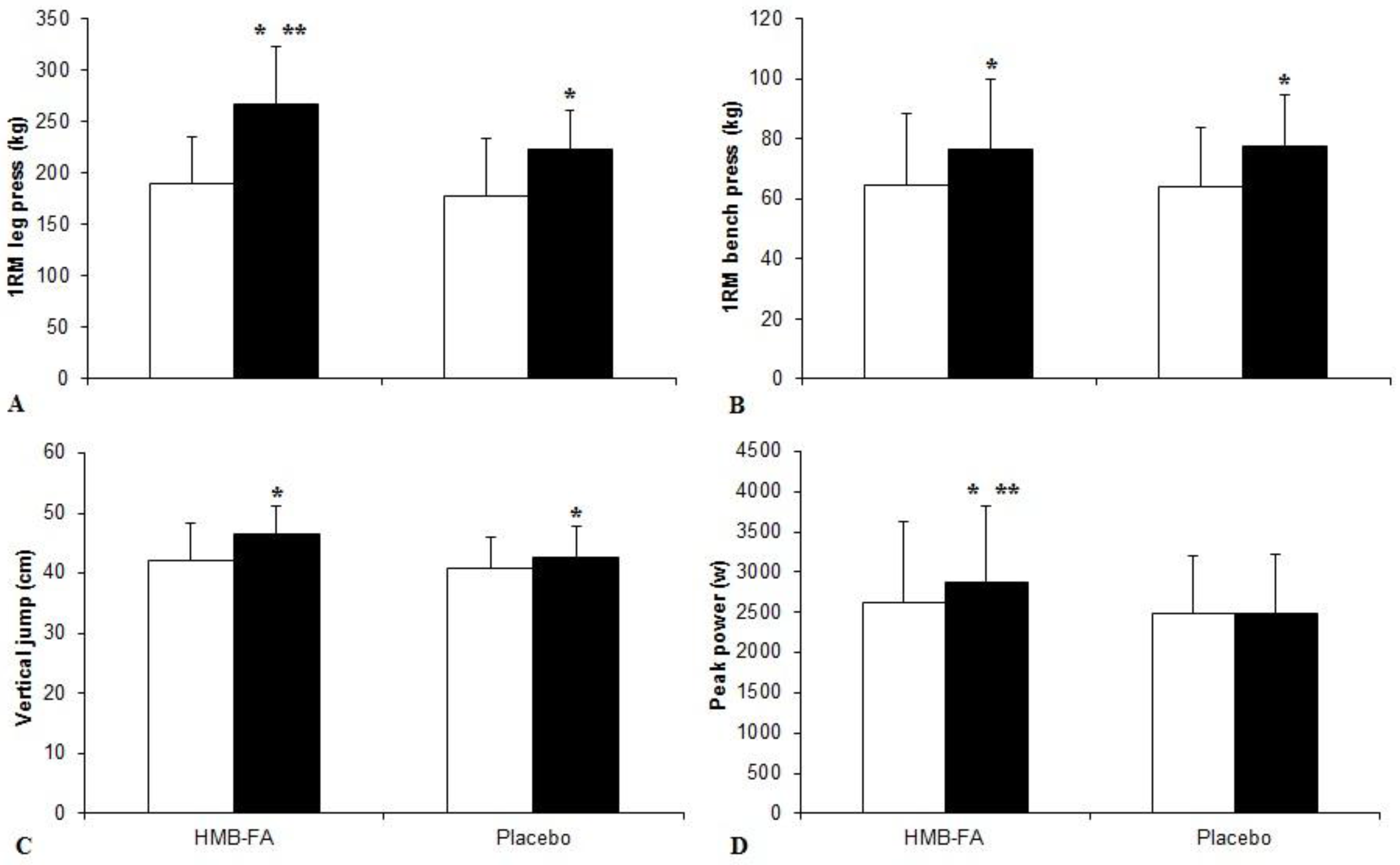