25-Hydroxy-Vitamin D Concentration Is Not Affected by Severe or Non-Severe Pneumonia, or Inflammation, in Young Children
Previous Article in Journal

The German Nutrition Society raised in 2012 the recommended daily vitamin D intake from 200 to 800 international units (IU) to achieve 25-hydroxyvitamin D (25(OH)D) levels of at least 50 nmol/L, even when endogenous vitamin D synthesis is minimal such as in winter. We aimed to evaluate this recommendation in women of childbearing age. This is a single-center, randomized, open trial conducted from 8 January to 9 May 2016 in Esslingen, Germany. We randomized 201 apparently healthy women to receive for 8 weeks a daily multimicronutrient supplement containing either 200 IU (n = 100) or 800 IU vitamin D3 (n = 101). Primary outcome measure was serum 25(OH)D. 196 participants completed the trial. Increases in 25(OH)D (median with interquartile range) from baseline to study end were 13.2 (5.9 to 20.7) nmol/L in the 200 IU group, and 35.8 (18.2 to 52.8) nmol/L in the 800 IU group (p < 0.001 for the between group difference). At study end, levels of ≥50 nmol/L were present in 70.4% of the 200 IU group and in 99% of the 800 IU group. Participants on hormonal contraceptives had higher baseline levels and a stronger increase in 25(OH)D. In conclusion, daily supplementation of 800 IU vitamin D3 during wintertime in Germany is sufficient to achieve a 25(OH)D level of at least 50 nmol/L in almost all women of childbearing age, whereas 200 IU are insufficient. View Full-Text
Keywords: randomized controlled trial; vitamin D; supplementation; multimicronutrient; women; 25(OH)D randomized controlled trial; vitamin D; supplementation; multimicronutrient; women; 25(OH)D
►▼ Show Figures 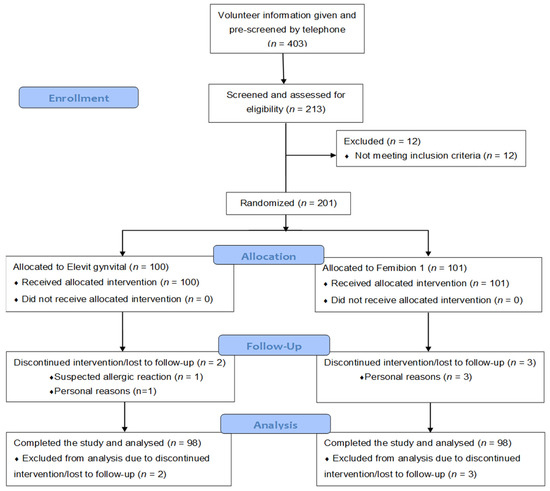