Polyphenols and DNA Damage: A Mixed Blessing
Next Article in Special Issue

:
Recent literature has highlighted the possible role of vitamin D in atopic dermatitis (AD), and that vitamin D supplementation might help to treat AD. This study determined the relationship between vitamin D level and AD, and assessed the efficacy of vitamin D supplementation. We searched the MEDLINE, EMBASE, and Cochrane databases up to May 2015. Observational studies and randomized controlled trials were included based on the available data on the serum 25-hydroxyvitamin D (25(OH)D) level and quantified data available for severity assessed using the Scoring Atopic Dermatitis (SCORAD) index or Eczema Area and Severity Index (EASI) score. Compared with healthy controls, the serum 25(OH)D level was lower in the AD patients of all ages (standardized mean difference = −2.03 ng/mL; 95% confidence interval (CI) = −2.52 to −0.78), and predominantly in the pediatric AD patients (standardized mean difference = −3.03 ng/mL; 95% CI = −4.76 to −1.29). In addition, the SCORAD index and EASI score decreased after vitamin D supplementation (standardized mean difference = −5.85; 95% CI = −7.66 to −4.05). This meta-analysis showed that serum vitamin D level was lower in the AD patients and vitamin D supplementation could be a new therapeutic option for AD.
Keywords:
atopic dermatitis; vitamin D; meta-analysis; systematic review

Atopic dermatitis (AD) is a common and recurring chronic inflammatory disease characterized by pruritus and eczema. It is commonly associated with hypersensitivity to allergens, more frequently with allergic diseases such as allergic rhinitis and asthma [1]. It reportedly affects 5%–20% of children and 1%–3% adults worldwide, and its prevalence is increasing in industrialized countries [2]. The pathophysiology of AD is mainly the result of epidermal barrier defectiveness and immune dysregulation [1,3]. The traditional therapeutic options for AD are antihistamine and immune modulatory agents, including topical/oral corticosteroids and topical/oral calcineurin inhibitors. These classic treatments are focused on reducing skin inflammation [4], but their potential side effects and poor patient adherence indicate the importance of finding new therapeutic options. Recent studies have suggested that vitamin D supplementation may be a safe and effective alternative treatment for AD. A Cochrane review provided evidence for the efficacy of dietary vitamin D supplements as a treatment for AD in 2012 [5]. However, only two studies were reviewed, and owing to their low quality, the review could not produce conclusive evidence for the efficacy of vitamin D supplements in AD treatment.
The present study performed a systematic review and meta-analysis to determine the serum 25-hydroxyvitamin D (25(OH)D) levels in AD patients compared with those in healthy controls. In addition, we reviewed double-blind randomized controlled trials to assess the efficacy of vitamin D supplementation as a treatment for AD by using the Scoring Atopic Dermatitis (SCORAD) index and the Eczema Area and Severity Index (EASI) score.

We conducted this systematic review in accordance with the Preferred Reporting Items for Systematic Reviews and Meta-Analyses statement [6]. We did not register a protocol.

We performed a systematic review of the MEDLINE, EMBASE, and Cochrane Central Register of Clinical Trials databases up to May 2015 by using the following keywords: (atopic dermatitis OR eczema) AND (vitamin D). The search was limited to human studies. The reference lists of the retrieved articles were reviewed manually.

The titles and abstracts of the identified articles were checked and independently reviewed by two of the authors (M.K. and Y.L.), with discrepancies resolved by discussion. We included observational studies to determine the association between serum 25(OH)D level and AD. In addition, we included randomized controlled trials to assess the efficacy of vitamin D supplementation as a treatment for AD patients. The following inclusion criteria were applied: (1) presence of AD; (2) data available for serum 25(OH)D level; and (3) quantified data available for AD severity assessed by use of the SCORAD index or the EASI score. We excluded studies that included pregnant women and cord blood samples. We contacted the investigators of the studies by e-mail when necessary to obtain raw or missing data. However, we excluded articles in the meta-analysis that did not contain sufficient data owing the low response rates.
We extracted the following data from the databases: study characteristics (author(s), year of publication, and study design), patient characteristics (age, serum 25(OH)D levels, and SCORAD indices or EASI scores), and vitamin D supplementation (dosages and durations). When the standard deviations (SD) were not available, the probability value was used to assess the SDs.

The quality of each study was assessed by two of the authors by using the nine-star Newcastle–Ottawa Scales (NOS) for observational studies [7]. Independent case–control studies were included, in accordance with the NOS standard procedure. Nine points were given to the study of highest quality, and studies awarded highest quality were considered as having sufficiently high quality in the meta-analysis.
The risk of bias was assessed using the Cochrane Collaboration Risk of Bias Tool for randomized controlled trials [8]. We assessed the risk of bias, random sequence generation, allocation concealment, blinding of participants and personnel, blinding of the outcome assessment, analysis of incomplete outcome data, selective reporting, and other biases. The two authors (M.K. and Y.L.) rated the included articles independently, and the score was finalized by discussion. The results of the assessments were categorized as follows: “yes” for a low risk of bias, “unclear”, and “no” for a high risk of bias.

The mean differences and 95% confidence intervals (CIs) were calculated from the extracted data. We assessed the heterogeneity across the studies using the I2 statistic, which indicates the percentage of the total variation among studies [9,10]. A funnel plot was constructed to assess the bias based on the standard error [11]. We assessed the interstudy heterogeneity using the I2 statistic, such that if I2 was > 50%, the assumption of homogeneity was deemed invalid, and the random effects model was applied; otherwise, the fixed model was used. Data analysis was performed using Review Manager 5.3 (The Cochrane Collaboration, The Nordic Cochrane Centre, Copenhagen, Denmark).

Of the 920 articles that were initially retrieved, 35 were selected for full-text review. Eleven of these selected studies were excluded because they did not fulfill the inclusion criteria. Figure 1 shows the flowchart of the studies as assessed through the review process. Table 1 shows the quality of the observation studies by use of the nine-star NOS, and Figure 2 shows the risk of bias of randomized controlled trials.

Seven studies assessed serum 25(OH)D levels in AD patients and in subjects without AD (control group). The characteristics of the included articles are summarized in Table 2. Overall, 986 AD patients and 657 controls were enrolled from all of the included studies. Two studies [14,17] included individuals of all ages, one study [12] included only adults, and four studies [13,15,16,18] included only pediatric patients. The study by Han et al. [17] included individuals of all ages, but the results were categorized into two groups: children and adults.
Compared with the control group, the AD group had lower serum 25(OH)D levels for individuals of all ages in all the included studies (standardized mean difference = −2.03 ng/mL; 95% CI = −2.98 to −1.08). The included studies were statistically heterogeneous (I2 = 98%; Figure 3A). In the subgroup analysis, the serum 25(OH)D level was significantly lower in the pediatric AD patients (standardized mean difference = −3.03 ng/mL, 95% CI = −4.76 to −1.29) than in the controls. The serum 25(OH)D level was lower in the adult AD group than in the control group; however, this difference was not statistically significant (standard mean difference = −0.09 ng/mL, 95% CI = −0.34 to 0.16; Figure 3B). Statistical heterogeneity was observed among the included studies. In the subgroup analysis, however, only two studies were conducted in adult AD patients, and the total number of enrolled adult AD patients was small (134 AD patients vs. 128 controls for the adults, and 690 AD patients vs. 657 controls for the children). 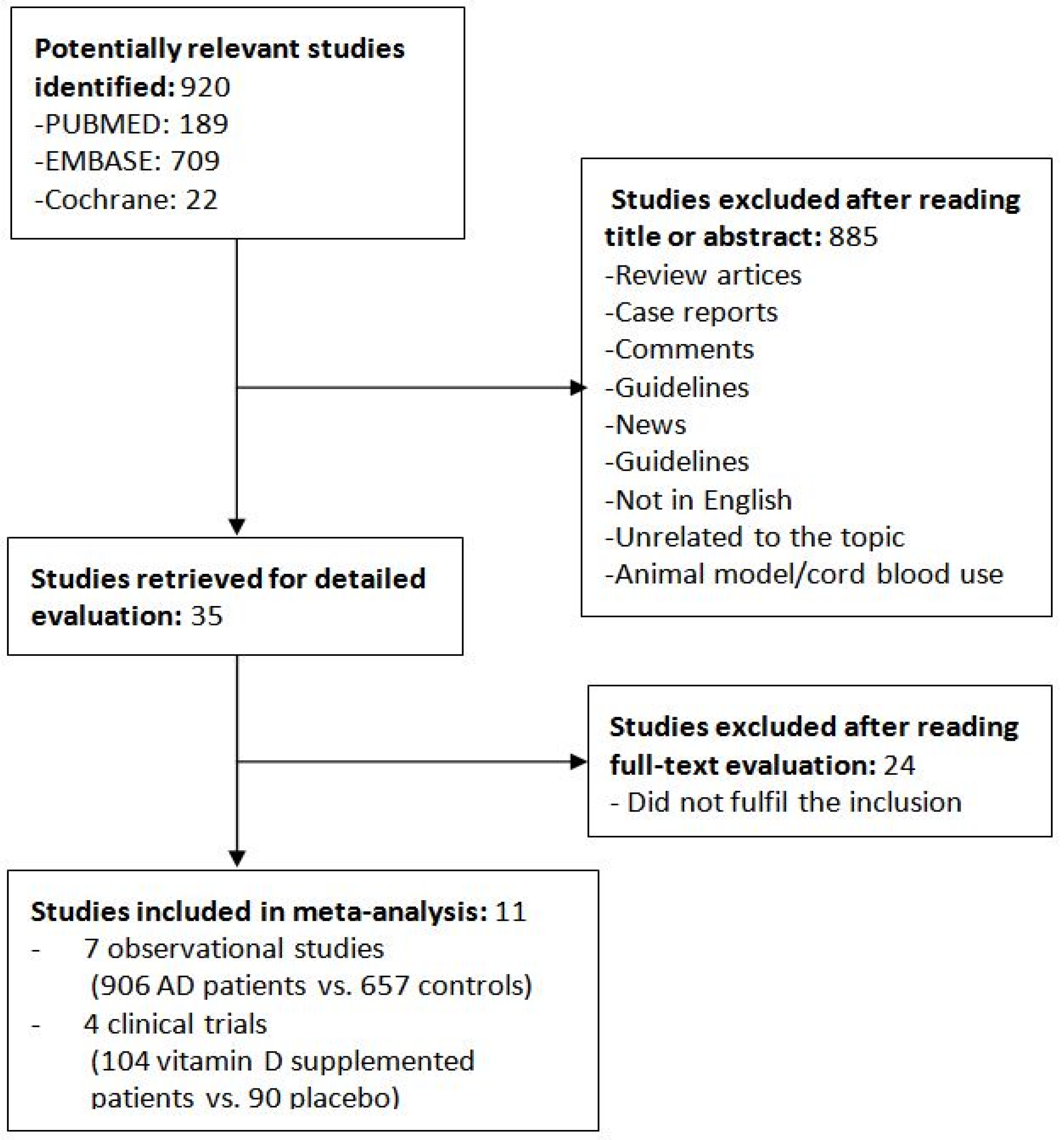 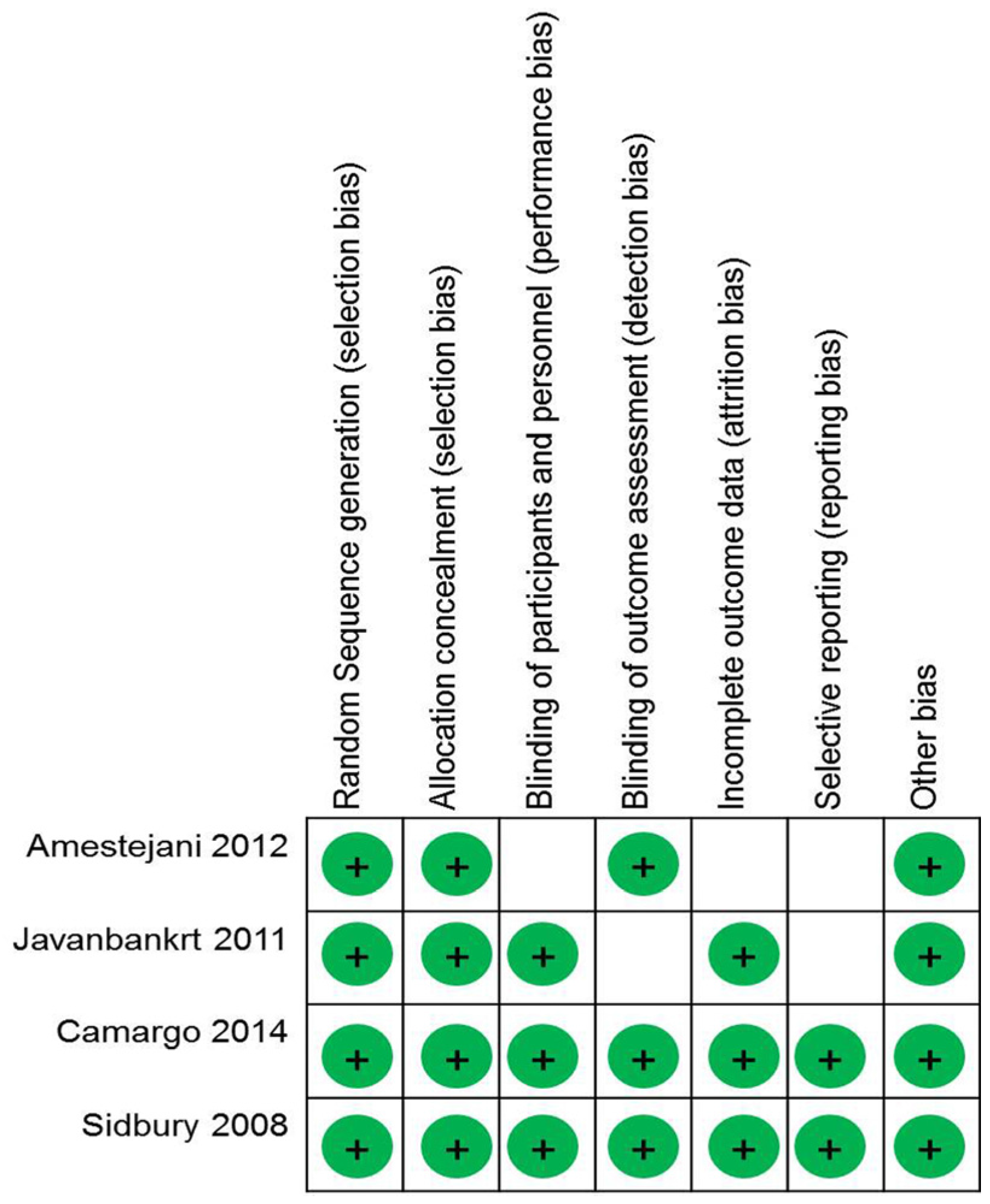 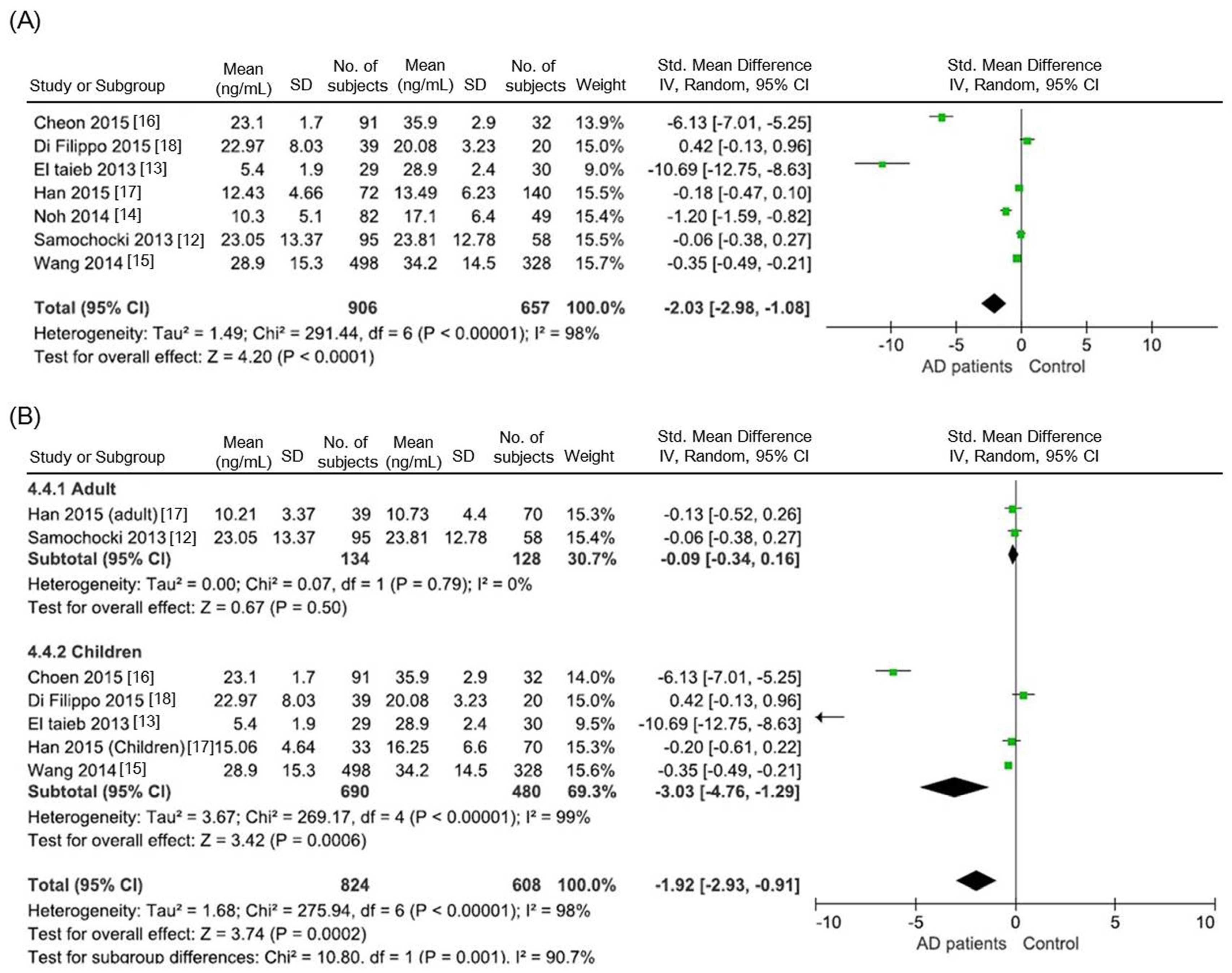 Table 1. Assessment of the quality of the included observation studies by using the Newcastle–Ottawa scale.
Table 2. Summary of the characteristics of the included studies for the comparison of serum 25-hydroxyvitamin D (25(OH)D) levels between AD patients and healthy controls.
Table 3. Summary of the characteristics of randomized clinical trials investigating the efficacy of vitamin D supplementation.
* SCORAD: Scoring Atopic Dermatitis, EASI: Eczema Area and Severity Index, NR: not reported.