Aluminum (Al) is a ubiquitous metal that can seriously harm the health of animals and humans. In our previous study, we demonstrated that Lactobacillus plantarum CCFM639 can decrease Al burden in the tissues of mice by inhibiting intestinal Al absorption. The main aim of the present research was to investigate whether the protection by the strain is also associated with enhancement of the intestinal barrier, alleviation of oxidative stress and modulation of the inflammatory response. In an in vitro cell model, two protection modes (intervention and therapy) were examined and the results indicated that L. plantarum CCFM639 alleviated Al-induced cytotoxicity. In a mouse model, L. plantarum CCFM639 treatment was found to significantly alleviate oxidative stress in the intestinal tract, regulate the function of the intestinal mucosal immune system, restore the integrity of tight junction proteins and maintain intestinal permeability. These results suggest that in addition to Al sequestration, L. plantarum CCFM639 can also inhibit Al absorption by protecting the intestinal barrier, alleviating Al-induced oxidative stress and inflammatory response. Therefore, L. plantarum CCFM639 has the potential to be a dietary supplement ingredient that provides protection against Al-induced gut injury.
Keywords: probiotic; lactic acid bacteria; Lactobacillus plantarum; aluminum; protection; gut health probiotic; lactic acid bacteria; Lactobacillus plantarum; aluminum; protection; gut health

Aluminum (Al) is the most abundant metal in nature and is widely used in daily life [1]. The principal exposure route to Al for humans is through food, water and beverages [2]. The mean levels of Al exposure via this route range from 0.2 to 1.5 mg/kg of body weight (bw) weekly in Europe and 1.3 mg/kg·bw/week for adults and 3.3 mg/kg·bw/week for children in China [3]. The European Food Safety Authority (EFSA) established a health-based guidance value for 1 mg/kg·bw/week, which is thus exceeded in China [4]. The excess Al could accumulate in most of the tissues, including brain, liver, kidneys, spleen and bone, and may cause Alzheimer’s disease, dialysis encephalopathy, microcytic anemia, and osteomalacia [5]. The intestinal tract is the first barrier against Al exposure. Previous studies reported that the intestinal tract was the main storage organ for Al: forty percent of the ingested Al was found to accumulate in the intestinal mucosa [6,7]. The intestinal barrier consists of a single layer of epithelial cells and tight junction (TJ) proteins, acting as the body’s first line of defense against harmful substances, including heavy metals [8]. Once Al is absorbed, it can induce oxidative stress and intestinal inflammation [2,9]. At the same time, the absorbed Al can damage TJ proteins and impair the intestinal barrier function and cause cell apoptosis, thereby increasing the intestinal permeability [2].
Probiotics exhibit a variety of health-promoting functions [10] and there is accumulating evidence that some probiotics have the potential to alleviate metal toxicity [11,12]. Moreover, probiotics can provide benefits to the host gut through a diverse set of mechanisms that include modulation of immune responses, alleviation of oxidative stress and reduce intestinal permeability by maintenance of intestinal barrier integrity by expression and distribution of TJ proteins [13,14,15]. TJ proteins comprise a large group of proteins, including the scaffolding proteins zonula occludens-1 (ZO-1), and the transmembrane proteins occludin and claudins, which are critical in maintaining barrier function [16]. A number of lactobacilli have been shown to improve intestinal barrier function, partly by modulating the expression and distribution of the TJ proteins [13,14].
Our previous studies demonstrated the protection against Al toxicity in vitro and in vivo by the probiotic strain Lactobacillus plantarum CCFM639 was due to its enhanced Al-binding and antioxidative capabilities [17,18]. It significantly inhibits Al absorption in the intestines of mice, thereby decreasing Al accumulation in tissues and alleviating tissue injury caused by this metal. A number of studies have demonstrated that probiotics can protect intestinal health [19,20]. We hypothesized that L. plantarum CCFM639 can inhibit Al absorption by protecting the intestinal integrity and modulating the inflammatory response.

Forty adult C57BL6 mice (6-week-old males, 18–25 g) were bought from the Shanghai Laboratory Animal Center (Shanghai, China). The mice were housed in a room with constant temperature and humidity and a 12 h light-dark cycle was maintained. The standard commercial mouse food and deionized water were given ad libitum. All of the protocols were approved by the Ethics Committee of Jiangnan University (Wuxi, China, JN No. 20150312-0717-10). The care procedures for the animals were implemented following the European Community guidelines (directive 2010/63/EU).
The mice were randomly divided into control, Al only, Al plus CCFM639 and Al plus deferiprone (DFP) groups (Table 1). An oral dose of Al ions (200 mg/L) in drinking water was used for establishing the Al exposure model [21,22]. The probiotic strain was given via gavage at a dose of 1 × 109 CFU in 0.2 mL of skim milk once daily. The skim milk was used as a protectant to avoid the loss of viability during lyophilization. The DFP was administered in 0.2 mL at a concentration of 2.5 g/L via oral gavage as a positive control. At the end of the experiment, each mouse was anesthetized by ether and then sacrificed.

The cell viability was measured by MTT assay according to the procedure previously described [23]. The assay kit was obtained from the Institute of Beyotime Biotechnology (Jiangsu, China). The result of the cell viability was expressed as the ratio to the level in the control group. Apoptotic rate was measured with an Annexin V-FITC/PI kit (Institute of Beyotime Biotechnology, Jiangsu, China), and the FITC levels were then detected by flow cytometry (FACSCalibur, Becton Dickinson, San Diego, CA, USA) [23].

The morphologies of the TJ proteins were evaluated by immunofluorescence staining as previously described [24]. Firstly, HT-29 cells were fixed, permeabilized and blocked. They were then incubated with the primary antibodies at 1:50 dilution, including anti-ZO-1, anti-claudin-1 and anti-occludin (Life Technologies, Rockford, AL, USA), overnight at 4 °C. The cells were then incubated with secondary antibodies, Alexa Fluor 488-conjugated goat anti-rabbit at 1:50 dilution (Life Technologies, Rockford, AL, USA), for 1 h at room temperature. Finally, the cells were exposed to the nuclear stain 4′,6-diamidino-2-phenylindole (DAPI) for 10 min at room temperature. Images of the stained cells were acquired using confocal laser scanning microscopy (TCS SP8, Leica, Mannheim, Germany).

2.7. Measurement of Intestinal Permeability of Mice

The intestinal permeability of the mice was analyzed by endotoxin assay as described in a previous study [26]. After sacrifice, the endotoxin levels in the serum were detected using an ELISA kit (Abcam, Cambridge, UK).

2.8. Measurement of Oxidative-Stress-Related Parameters in HT-29 Cell Cultures and Serums

The activities of superoxide dismutase (SOD) and catalase (CAT) and the level of malondialdehyde (MDA) were used to evaluate oxidative stress [17]. The level of MDA and activities of SOD and CAT in HT-29 cells and serums of mice were determined by assay kits (Nanjing Jiancheng Bioengineering, Jiangsu, China). The level of reactive oxygen species (ROS) in HT-29 cells was measured by S0033 assay kit (Institute of Beyotime Biotechnology, Jiangsu, China) following manufacturer’s instructions.

The Al ion cytotoxic concentration for HT-29 cells was determined by MTT assay (Figure S1). The result show that the cell viability decreased with the increase of Al ion concentration and reduced to approximately 50% at an Al ion concentration of 4 mM, so this concentration was selected to be used in the subsequent experiments. Compared with the control group, the HT-29 cell viability in the Al-only group decreased significantly (p < 0.05, Figure S2B). Treatment with CCFM639 was found to substantially reverse the decrease in cell viability in both intervention assay (treatment simultaneously with Al exposure) and therapy assay (treatment after Al exposure). The flow cytometry data indicate that the percentage of apoptotic cells in the control group was less than 10%, while Al exposure significantly increased the apoptotic cell count to 28.73% in the intervention assay and 32.85% in the therapy assay (Figure S2A,C). Compared with the Al-only group, treatment with the probiotic exhibited a significant protective effect against Al-induced cell apoptosis and the values drop to 17.50% in intervention assay and 19.71% in therapy assay (p < 0.05). However, the treatment with CCFM639 only had no marked effect on cell viability or cell apoptosis.

The tight junction (TJ) proteins (ZO-1, claudin-1, and occludin) in the cell monolayers were analyzed qualitatively (Figure 1A, Figure 2A and Figure 3A). In the control group, the TJ proteins were continuously distributed along the cell boundaries. After Al exposure, the TJ proteins were discontinuously distributed at sites of cell-to-cell contact. Co-treatment with CCFM639 and Al markedly alleviated the Al-induced damage to the TJ proteins.
In the in vivo study using the immunofluorescence assay, representative images of TJ proteins staining in the small intestine and colon samples are shown in Figure 1B, Figure 2B and Figure 3B. Exposure to Al resulted in a decrease of staining intensity and density for the three TJ proteins in both the small intestine and colon. Treatment with CCFM639 markedly increased the staining intensities and densities with a lesser effect shown by DFP. Therefore, L. plantarum CCFM639 demonstrated a better protective effect against Al-induced damage to the intestinal TJ proteins than DFP. Moreover, Al exposure significantly reduced the mRNA expression of the three TJ proteins in the colons and small intestines of mice (Figure 4C, p < 0.05). In contrast to the Al only group, the expression of all of these proteins was partially restored by treatment with CCFM639 or DFP, and indeed CCFM639 increased the three TJ protein mRNA to levels close to the control group.

Endotoxin translocation is related to disruption of the gut barrier [27]. Therefore, the endotoxin level in the serum was used to evaluate the intestinal permeability. As shown in Figure 5, after Al exposure, the endotoxin level markedly increased, indicating that Al exposure was related to the increase of gut permeability. Moreover, ingestion of the probiotic strain markedly reduced gut permeability, and L. plantarum CCFM639 had a better protective effect than DFP.

3.4. Effects of L. plantarum CCFM639 on Al-Induced Oxidative Stress In Vitro and In Vivo

As shown in Figure 6, both in vitro and in vivo assays, Al exposure markedly increased levels of ROS and MDA and decreased the activities of SOD and CAT. Moreover, in the in vitro assays, the ROS levels in the intervention and therapy assays were enhanced by 2.66 and 3.13 fold, respectively, compared with the control group (Figure 6A). Co-treatment with CCFM639 and Al dramatically inhibited Al-induced ROS generation, reduced the MDA level and increased the activities of SOD and CAT in both the intervention and therapy assays (Figure 6A; p < 0.05). The results of ROS were further confirmed by confocal microscopy performed immediately (Figure S3). However, there was no significant change in the levels of ROS or MDA between the control and the CCFM639 only group. In vivo, L. plantarum CCFM639 or DFP treatment led to a significant decrease of MDA levels and an increase of SOD and CAT activities in serum of mice (Figure 6B; p < 0.05). However, L. plantarum CCFM639 had a more pronounced effect than DFP on these oxidative-stress-related parameters.

3.5. Effects of L. plantarum CCFM639 on Al-Induced Alterations of Pro-Inflammatory Cytokines In Vitro and In Vivo

This study demonstrates that L. plantarum CCFM639 can protect against Al-induced gut injuries, including reducing intestinal epithelial cell cytotoxicity, maintaining the integrity of TJ proteins, modulating inflammation and alleviating oxidative stress in both cell and animal models. These results show that L. plantarum CCFM639 can be used in fermented functional foods against oral Al exposure by protecting gut health in daily life. 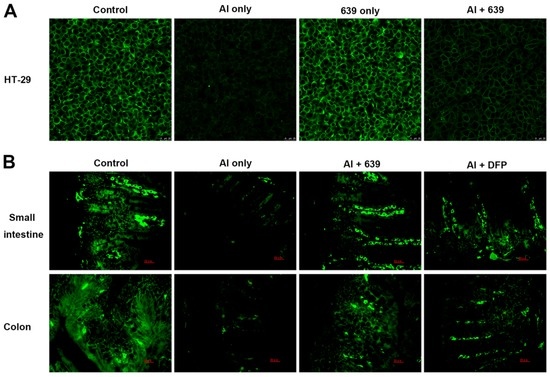 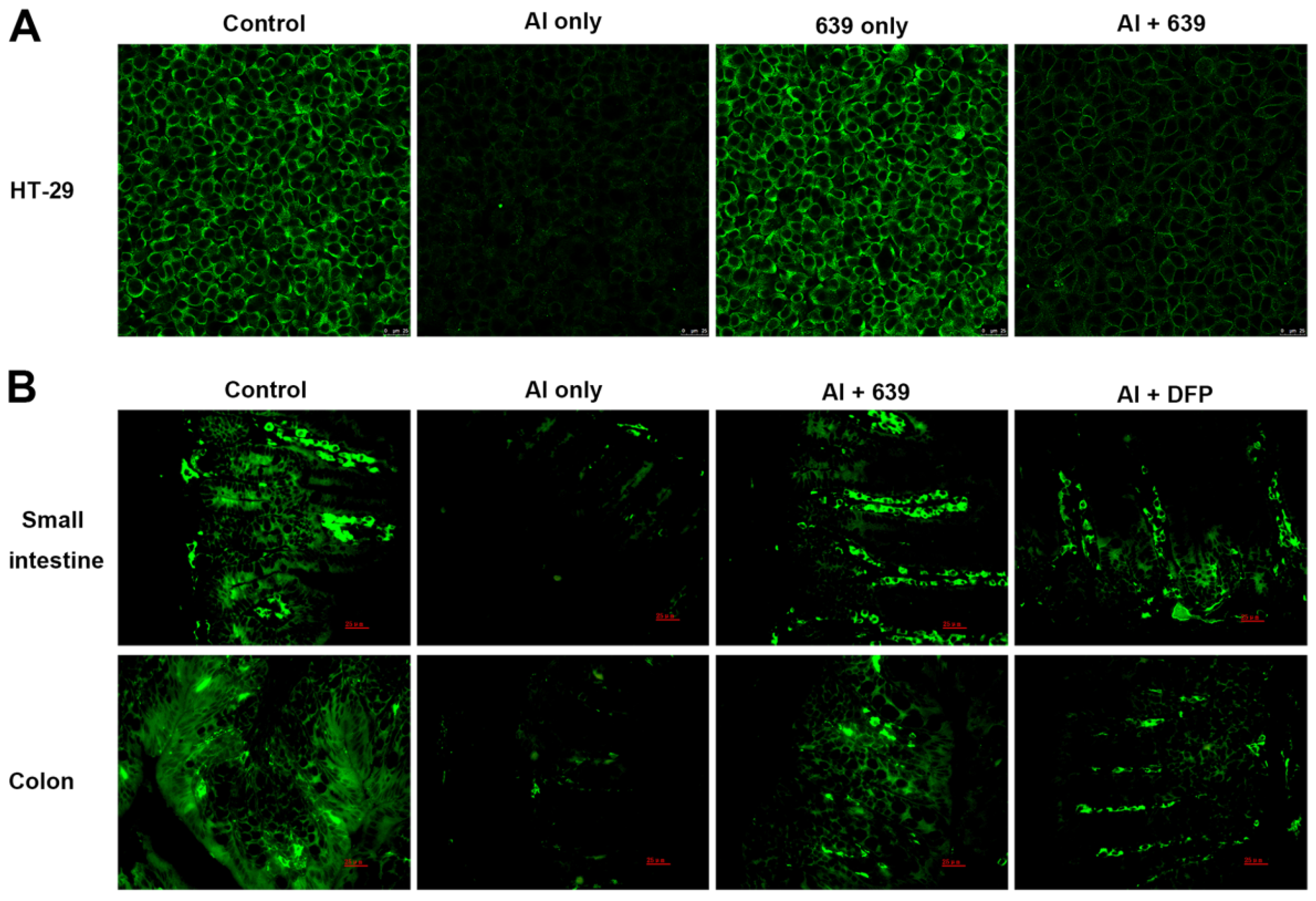 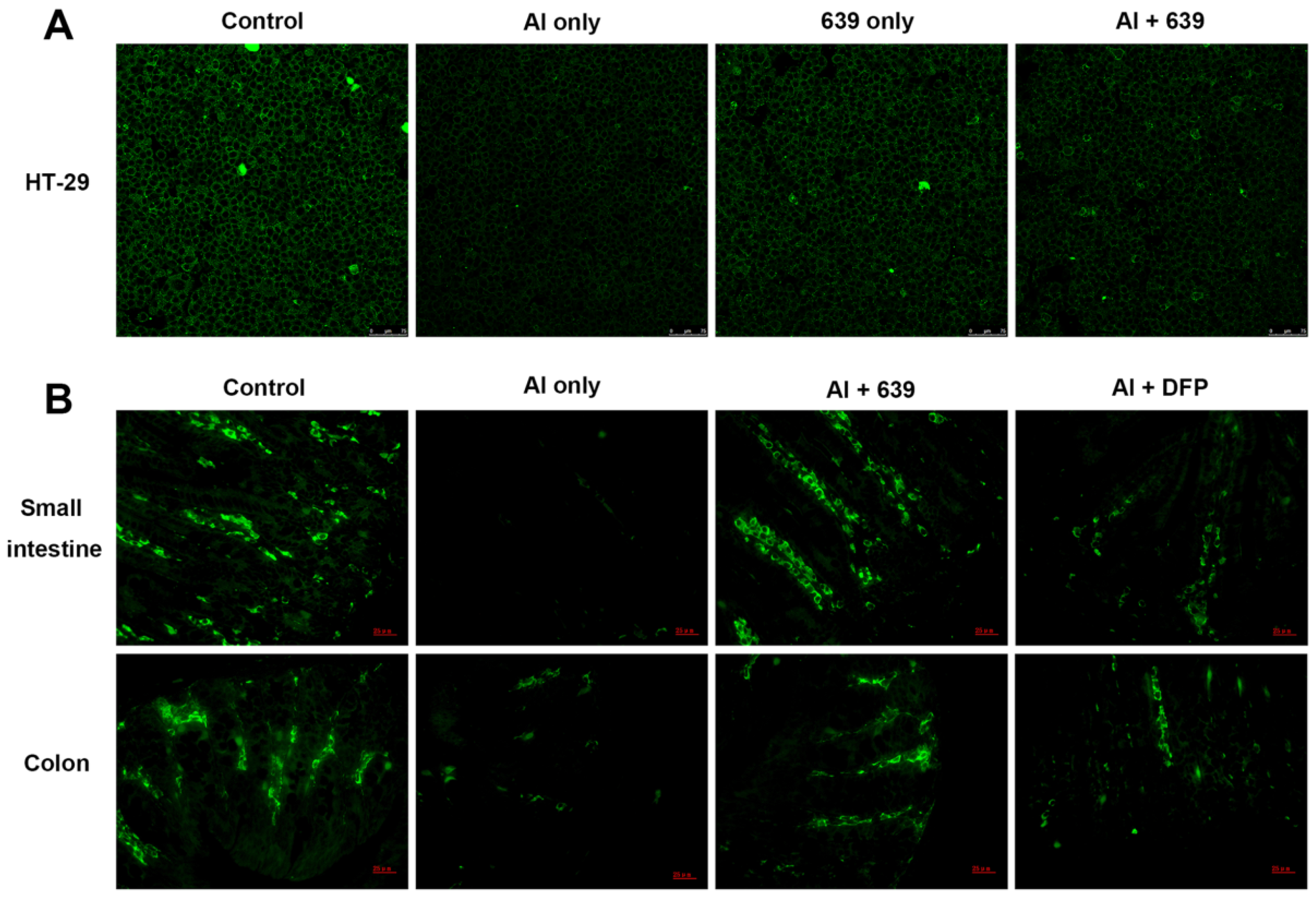 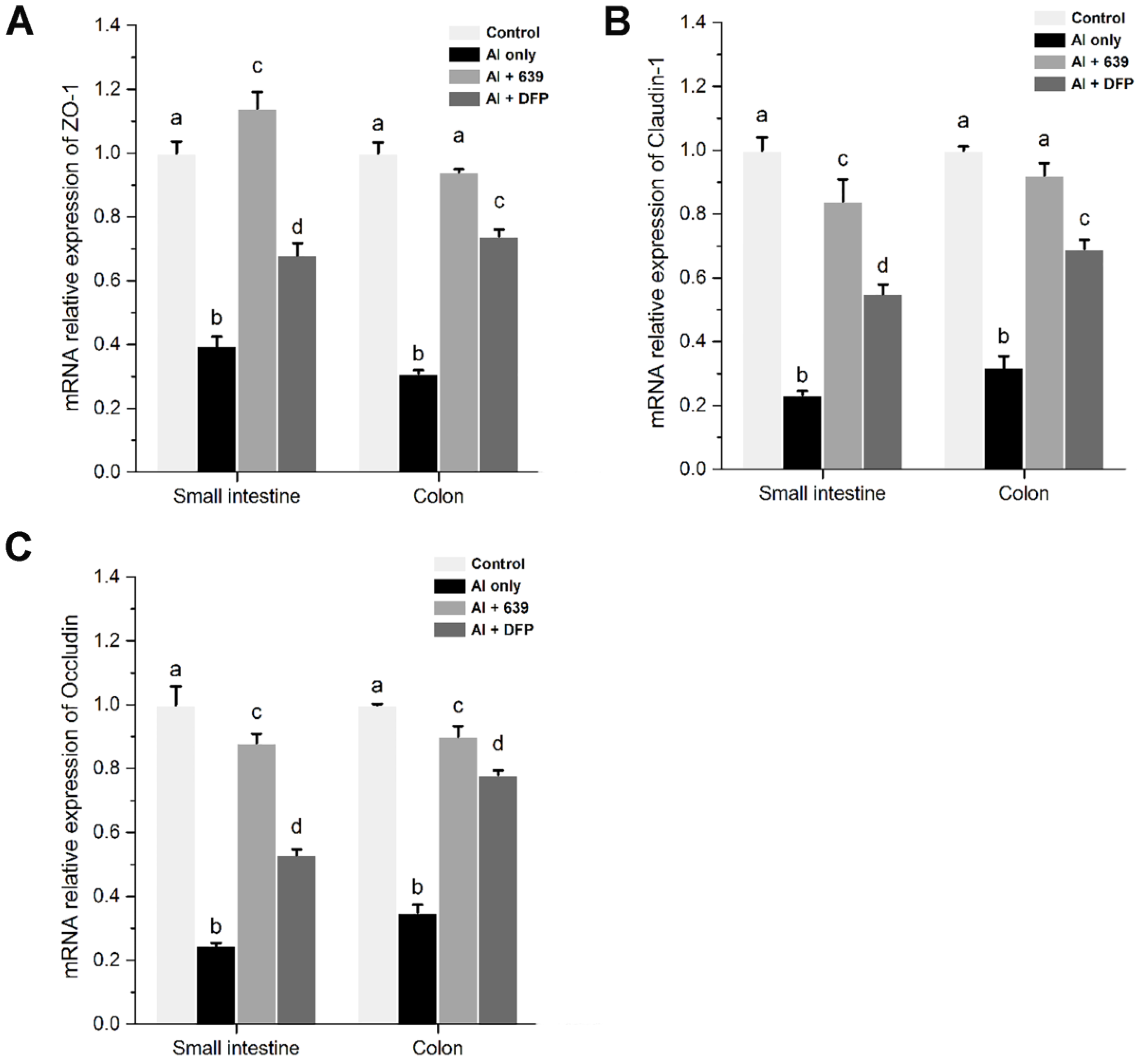 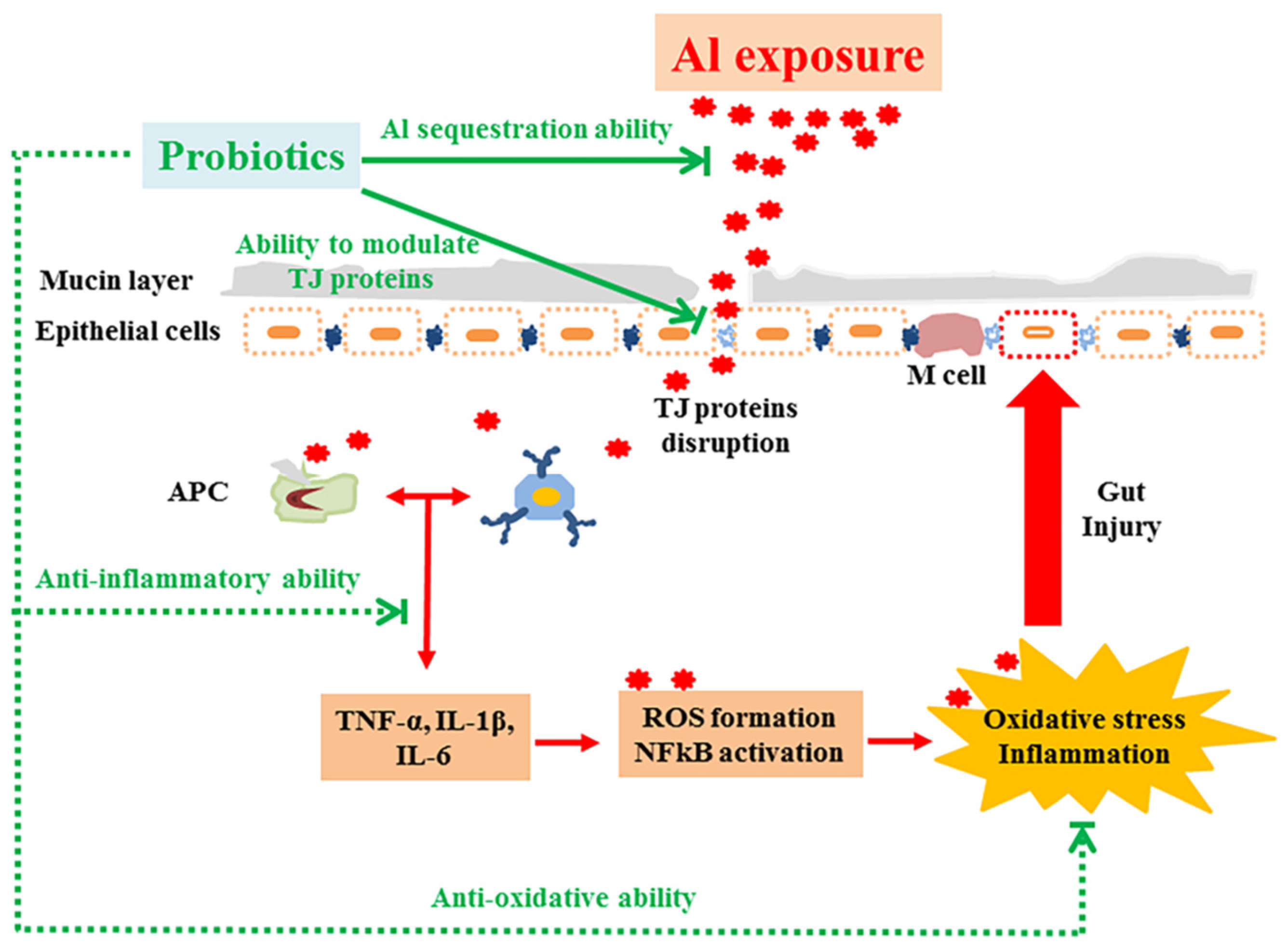 Table 1. The design of cell and animal experiments.