Impact of Pre-Pregnancy BMI on B Vitamin and Inflammatory Status in Early Pregnancy: An Observational Cohort Study
Previous Article in Special Issue

:
The incidence of inflammatory bowel disease (IBD) and associated oxidative stress is increasing. The antioxidant mineral selenium (Se) was measured in serum samples from 106 IBD patients (53 with ulcerative colitis (UC) and 53 with Crohn’s disease (CD)) and from 30 healthy controls. Serum Se concentrations were significantly lower in UC and CD patients than in healthy controls (p < 0.001) and significantly lower in CD patients than in UC patients (p = 0.006). Se concentrations in patients were significantly influenced by sex, body mass index (BMI), the inflammatory biomarker α-1-antitrypsin, surgery, medical treatment, the severity, extent, and form of the disease and the length of time since onset (p < 0.05). Se concentrations in IBD patients were positively and linearly correlated with nutritional (protein, albumin, prealbumin, cholinesterase and total cholesterol) and iron status-related (hemoglobin, Fe and hematocrit) parameters (p < 0.05). A greater impairment of serum Se and cardiovascular status was observed in CD than in UC patients. An adequate nutritional Se status is important in IBD patients to minimize the cardiovascular risk associated with increased inflammation biomarkers, especially in undernourished CD patients, and is also related to an improved nutritional and body iron status.
Keywords:
ulcerative colitis; Crohn’s disease; selenium; influencing factors; nutritional and biochemical markers 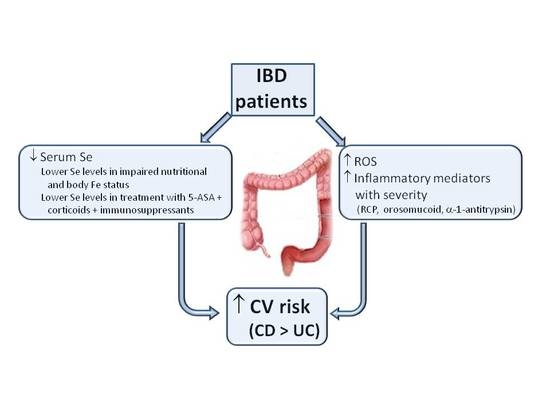 Inflammatory bowel diseases (IBDs) include chronic diseases that affect the gastrointestinal tract, especially the gut [1]. IBDs, which have a significant genetic component, are divided between Crohn's disease (CD) and ulcerative colitis (UC) according to the site involved and the symptoms. Their increased incidence appears to be associated with nutritional imbalances and environmental factors, while an abnormal, exaggerated, and sustained inflammatory response can result from microbiological infections induced by gut microbiota [2,3], with an increase in inflammatory markers [4]. IBDs also produce significant changes in neuronal functions that regulate the bowel, increasing intestinal tract malfunction and the mortality rate [5].
Nutrigenomic research into the effects of food and food components on nutrient-gene interactions has addressed the epigenetic changes responsible for the IBD phenotype [1,6]. Importantly, IBDs have been associated with an increased risk of colon cancer [1,7]. However, despite evidence on the importance of Se and selenoproteins for the cardiovascular (CV) system due to their antioxidant functions [8,9,10] and the role of Se-enriched diets in reducing colon cancer risk development [11], few data are available on the influence of Se in IBDs. Se supplementation has been reported to protect against tissue damage in chemically-induced UC by modifying the expression of genes involved in the mitochondrial regulation of cell death [12]. In addition, a combination of Se and vitamin E was found to exert a protective effect in rats by increasing their overall antioxidant capacity and total thiol levels in the colon [13]. Epidemiological studies have reported reduced Se concentrations in patients with CD or UC [14,15], and clinical studies have evidenced lower blood Se concentrations in IBD patients [5,16,17,18,19]. Se may have a beneficial effect in IBDs by modulating gut inflammation in combination with the gut microbiota [15]. Thus, an increase in selenoproteins deactivates the prostaglandin E2 (PGE2) secreted by macrophages [14] by changing macrophage polarization from the macrophage-1 (M1) to the macrophage-2 (M2) phenotype, which in turn decreases gut inflammation [20]. These results suggest that higher Se concentrations than are currently recommended may be beneficial for IBD patients.
Our study hypotheses were as follows: (i) Se serum concentrations may be a biomarker of the total Se status of IBD patients [21] and may therefore assist in the differentiation between CD and UC; and (ii) serum Se concentrations in IBD patients are influenced by their body mass index (BMI), length of time with IBD, surgical and/or medical treatment, and the severity, extent, and form of the disease. In order to test these hypotheses, the objectives of this study were: to determine serum Se in patients with IBD (UC and CD patients) and healthy controls from Granada province (SE Spain) using hydride generation atomic absorption spectrometry (HG-AAS); to examine the influence of the aforementioned factors; and to analyze the relationship between IBD and various biochemical and nutritional biomarkers, including those related to inflammatory processes and oxidative stress.

The study was carried out in a group of 106 IBD patients from a third-level general hospital in Granada (Southeast Spain): 53 with UC and 53 with CD. The diagnosis and severity of the disease were established by a single gastroenterology consultant (T.C.A.-T) based on the symptoms and results of blood analysis and colonoscopy. Data were gathered on: sex, BMI, length of time with IBD, surgical and/or medical treatment of the patient and the severity, extent, and form (inflammatory, fistulizing, mixed, obstructive, chronic intermittent, or chronic continuous) of the disease. The control group comprised 30 healthy blood donors from the same area. Informed written consent was obtained from all participants for participation in the study, which was conducted in accordance with the Helsinki Declaration. The release of human serum samples was approved by the Ethics Committee of the hospital (Ethic approval code: GHC-970708).

Blood samples were drawn from the antecubital vein of all participants after overnight fasting and were immediately analyzed by the clinical analysis laboratory of the hospital, using a Hitachi 717 automated analyzer (Englewood, NJ, USA) to determine 26 biochemical and nutritional indexes. Part of the blood sample was left to spontaneously coagulate and was then centrifuged at 3000× g for 10 min to obtain the serum, which was frozen and kept at −25 °C until Se determination (see below) at the laboratory of the Nutrition and Food Chemistry Department of the University of Granada.

Before the Se determination, serum samples (200 μL) were thawed and homogenized. Sample mineralization was performed using a HNO3/HClO4 mixture heated at 110 °C in a thermostatic block following a previously optimized procedure [22,23]. After reducing Se (VI) to Se (IV) in HCl, total Se was measured by HG-AAS using a Perkin-Elmer model 1100B atomic absorption spectrometer equipped with Perkin-Elmer MHS-10 hydride generator (Perkin-Elmer, Norwalk, CT, USA). The absorbance in each sample (peak height mode) was correlated with its Se concentration by the addition-calibration method. Reference material 0148 from Contox trace metal serum control Panel C (Kaulson Laboratories Inc., West Caldwel, NJ, USA) was used to establish the accuracy (99.83%) and precision (6.55%) of the method, finding no significant difference (p > 0.05) between the concentration obtained (156.4 ± 11.0 μg/L) and the certified concentration (150.5 ± 4.9 μg/L).

Serum Se values were expressed as means ± standard error of the mean (SEM) and then analyzed by one-way analysis of variance (ANOVA) to evaluate the influence of the study factors listed above; the Student’s t-test was used when parametric conditions were met and the Kruskall-Wallis test when they were not. Regression analysis of the relationship of serum Se concentrations with biochemical and nutritional results were performed using Pearson’s test when parametric conditions were met and Spearman’s test when they were not. SPSS 17.0 for Windows (SPSS, Inc., Chicago, IL, USA) was used for the statistical analyses; p < 0.05 was considered significant.

This study was financially supported by research funds from project AGR-141 from the Consejería de Ciencia y Empresa (Junta de Andalucía). The authors thank Richard Davies for assistance with the English version.