The Effect of Vegan Protein-Based Diets on Metabolic Parameters, Expressions of Adiponectin and Its Receptors in Wistar Rats
Previous Article in Journal

Adequate zinc stores in the body are extremely important during periods of accelerated growth. However, zinc deficiency is common in developing countries and low maternal circulating zinc concentrations have previously been associated with pregnancy complications. We reviewed current literature assessing circulating zinc and dietary zinc intake during pregnancy and the associations with preeclampsia (PE); spontaneous preterm birth (sPTB); low birthweight (LBW); and gestational diabetes (GDM). Searches of MEDLINE; CINAHL and Scopus databases identified 639 articles and 64 studies were reviewed. In 10 out of 16 studies a difference was reported with respect to circulating zinc between women who gave birth to a LBW infant (≤2500 g) and those who gave birth to an infant of adequate weight (>2500 g), particularly in populations where inadequate zinc intake is prevalent. In 16 of our 33 studies an association was found between hypertensive disorders of pregnancy and circulating zinc; particularly in women with severe PE (blood pressure ≥160/110 mmHg). No association between maternal zinc status and sPTB or GDM was seen; however; direct comparisons between the studies was difficult. Furthermore; only a small number of studies were based on women from populations where there is a high risk of zinc deficiency. Therefore; the link between maternal zinc status and pregnancy success in these populations cannot be established. Future studies should focus on those vulnerable to zinc deficiency and include dietary zinc intake as a measure of zinc status. View Full-Text
Keywords: zinc; pregnancy; pregnancy complications; dietary zinc intake; circulating zinc zinc; pregnancy; pregnancy complications; dietary zinc intake; circulating zinc
►▼ Show Figures 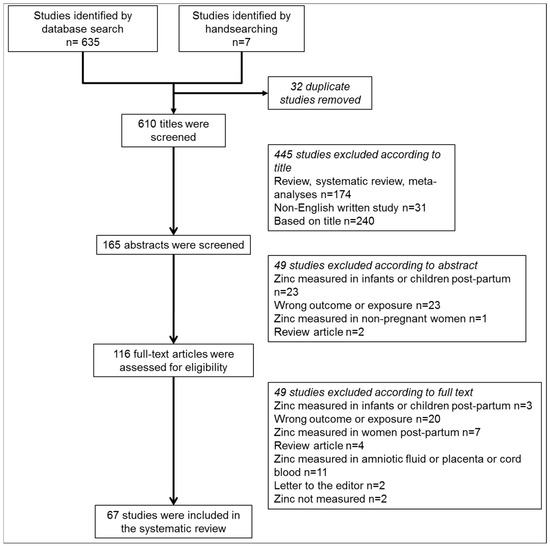