The Effect of Vegan Protein-Based Diets on Metabolic Parameters, Expressions of Adiponectin and Its Receptors in Wistar Rats

Vegan protein-based diet has attracted increasing interest in the prevention of metabolic syndrome (MetS). Meanwhile, adiponectin has become a highly potential molecular target in the prevention of MetS. Our study will identify a potential vegan protein diet for the prevention of MetS using rat models. Thirty-six Wistar rats were randomly assigned into three groups and given diets containing one of the following proteins for 12 weeks: casein (CAS, control diet), soy protein (SOY), and gluten-soy mixed protein (GSM). Changes in metabolic parameters as well as the expressions of adiponectin and its receptors were identified. Compared to CAS diet, both SOY and GSM diets led to decreases in blood total cholesterol and triglycerides, but only GSM diet led to an increase in HDL-cholesterol; no marked difference was observed in blood glucose in all three groups; HOMA-IR was found lower only in SOY group. Among groups, the order of serum adiponectin level was found as GSM > SOY > CAS. Similar order pattern was also observed in expression of adiponectin in adipose tissue and AdipoR1 mRNA in skeletal muscle. Our results suggested for the first time that, besides SOY diet, GSM diet could also be a possible substitute of animal protein to prevent MetS. View Full-Text
Keywords: vegan protein; dietary intervention; metabolic syndromes; adiponectin; rats vegan protein; dietary intervention; metabolic syndromes; adiponectin; rats
►▼ Show Figures 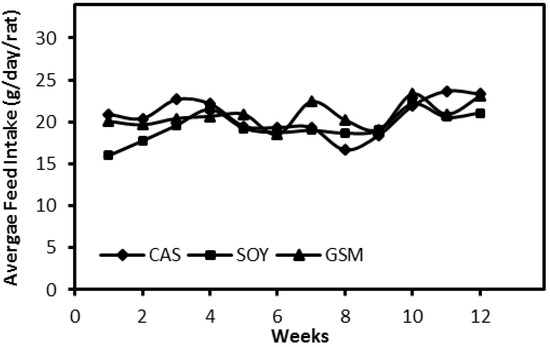