Dietary changes have been perceived as the first-line intervention in metabolic syndrome, targeting insulin sensitivity and preventing or correcting the associated metabolic and cardiovascular abnormalities. Targeting illness with selected components of foods, defined as treatment with functional foods or nutrapharmacology, could provide protection against cardiovascular diseases and diabetes [1,2]. Functional or medicinal foods and phytonutrients are widely accepted for maintaining well-being, enhancing health, and modulating immune function to prevent specific diseases [3].
Vitamin E is a group of closely-related phytochemicals including the tocopherols and tocotrienols, with potential cardiovascular and metabolic health-promoting properties [4]. They share a common chromanol ring with the tocopherols having a saturated phytyl side chain, differing from the farnesyl side chain with three double bonds in the tocotrienols. Each group has α-, β-, γ- and δ-homologues [5].
While in vitro and in vivo studies on tocopherols demonstrated positive antioxidant and anti-atherogenic effects, the clinical evidence was inconclusive or even negative [6]. This lack of therapeutic value of the tocopherols makes it worthwhile to investigate the efficacy of the tocotrienols, as these homologues may have unique functions [7,8]. Tocotrienols have been claimed to possess neuroprotective, anticancer and cholesterol-lowering properties that are often not exhibited by tocopherols [7]. Neurodegeneration in mouse hippocampal HT4 neural cells was prevented with 250 nanomolar concentrations of α-tocotrienol, but not α-tocopherol [9]. This suggests that the molecular and therapeutic targets of the tocotrienols are distinct from those of the tocopherols [7]. In addition to their shared antioxidant activities, tocotrienols have anti-inflammatory [10] and anti-angiogenic activities unlike the tocopherols [11,12]. These observations are of particular note considering the low plasma tocotrienol concentrations achieved in such studies, suggesting powerful metabolic effects. These activities could play vital roles in attenuating metabolic syndrome. There is little data on the ability of tocotrienols to reverse chronic diet-induced changes in humans. Hence, this study has measured the changes following intervention with palm tocotrienol-rich fractions (TRF) in a rat model of chronic diet-induced cardiovascular, metabolic and liver changes [13,14]. Palm-derived TRF is as tocopherol-tocotrienol mixture, at a ratio of approximately 1:3. The mixture is a commercial product for human consumption from companies including Golden Hope Bioganic (Sime Darby), Carotech, Palm Nutraceuticals, Eisai and Davos Life Sciences. However, individual homologues have been difficult to obtain in sufficient quantities for chronic animal studies.

The experimental groups consisting of male Wistar rats (aged 9–10 weeks; weighing 329 ± 2 g, n = 32) were obtained from The University of Queensland Biological Resources unit and individually housed at the University of Southern Queensland’s Animal House Facility. All experimental protocols were approved by the Animal Experimentation Ethics Committee of the University of Southern Queensland, under the guidelines of the National Health and Medical Research Council of Australia. Rats were divided into 4 groups: (i) corn starch (C, n = 8), (ii) high carbohydrate, high fat (H, n = 8), (iii) C + tocotrienol-rich fraction (TRF) (CT, n = 8), (iv) H + TRF (HT, n = 8). This TRF contained α-tocotrienol (31.9%), β-tocotrienol (2.1%), γ-tocotrienol (24.8%) and δ-tocotrienol (18.3%) together with α-tocopherol (22.9%). 120 mg/kg/day palm TRF dissolved in vitamin E-stripped palm olein (240 mg TRF/mL palm olein, Malaysian Palm Oil Board, Malaysia) was given for the final 8 weeks of the 16 weeks protocol via once-daily oral gavage. This dose was chosen as the reported oral no-observed-adverse-effects level in male rats given a similar tocotrienol-tocopherol mixture [15]. All experimental groups were housed in a temperature-controlled, 12-h light/dark cycle environment with ad libitum access to water and food. Measurements of body weight and food and water intakes were taken daily to monitor the day-to-day health of the rats. Feed conversion efficiency (%) was calculated as:

and expressed as adiposity per cent [18].

The left ventricular function of the rats in all treatment groups was assessed using the Langendorff heart preparation. Terminal anaesthesia was induced via i.p. injection of pentobarbitone sodium (100 mg/kg). Once anaesthesia was achieved, heparin (1000 IU) was injected into the right femoral vein. After removal of the heart, isovolumetric ventricular function was measured by inserting a latex balloon into the left ventricle connected to a Capto SP844 MLT844 physiological pressure transducer and Chart software on a Maclab system. All left ventricular end-diastolic pressure values were measured by pacing the heart at 250 beats per minute using an electrical stimulator. End-diastolic pressure was obtained starting from 0 mmHg up to 30 mmHg. The right and left ventricles were separated and weighed. Diastolic stiffness constant (κ, dimensionless) was calculated [16].

Following euthanasia, the heart, liver, kidneys, visceral fat pads and spleen were removed and blotted dry for weighing. All organ weights were normalised relative to tibial length at the time of removal and presented in mg/mm.

2.9. Histology of Heart and Liver

Immediately after removal, heart and liver tissues were fixed in 10% buffered formalin with change of formalin every 3 days for 10 days to remove traces of blood from the tissue. The samples were then dehydrated and embedded in paraffin wax. Thin sections (5 μm) of left ventricle and the liver were cut and stained with haematoxylin and eosin stain for determination of inflammatory cell infiltration. Collagen distribution was observed in the left ventricle following picrosirius red staining. Laser confocal microscopy (Zeiss LSM 510 upright Confocal Microscope) was used to determine the extent of collagen deposition in selected regions.

Blood was collected from the abdominal aorta following euthanasia and centrifuged at 5000× g for 15 min within 30 min of collection into heparinised tubes. Plasma was separated and transferred to Eppendorf tubes for storage at −20 °C before analysis. Plasma concentrations of total cholesterol, triglycerides, non-esterified fatty acids (NEFA), activities of plasma alanine transaminase (ALT) and aspartate transaminase (AST) were determined using kits and controls supplied by Olympus using an Olympus analyser (AU 400 Tokyo, Japan) [14].

All data sets were represented as mean ± standard error of mean (SEM). Comparisons of findings between groups were made via statistical analysis of data sets using one-way and two-way analysis of variance (ANOVA). When interaction and/or the main effects were significant, means were compared using Newman-Keuls multiple-comparison post hoc test. A p-value of <0.05 was considered as statistically significant. All statistical analyses were performed using Graph Pad Prism version 5.00 for Windows. 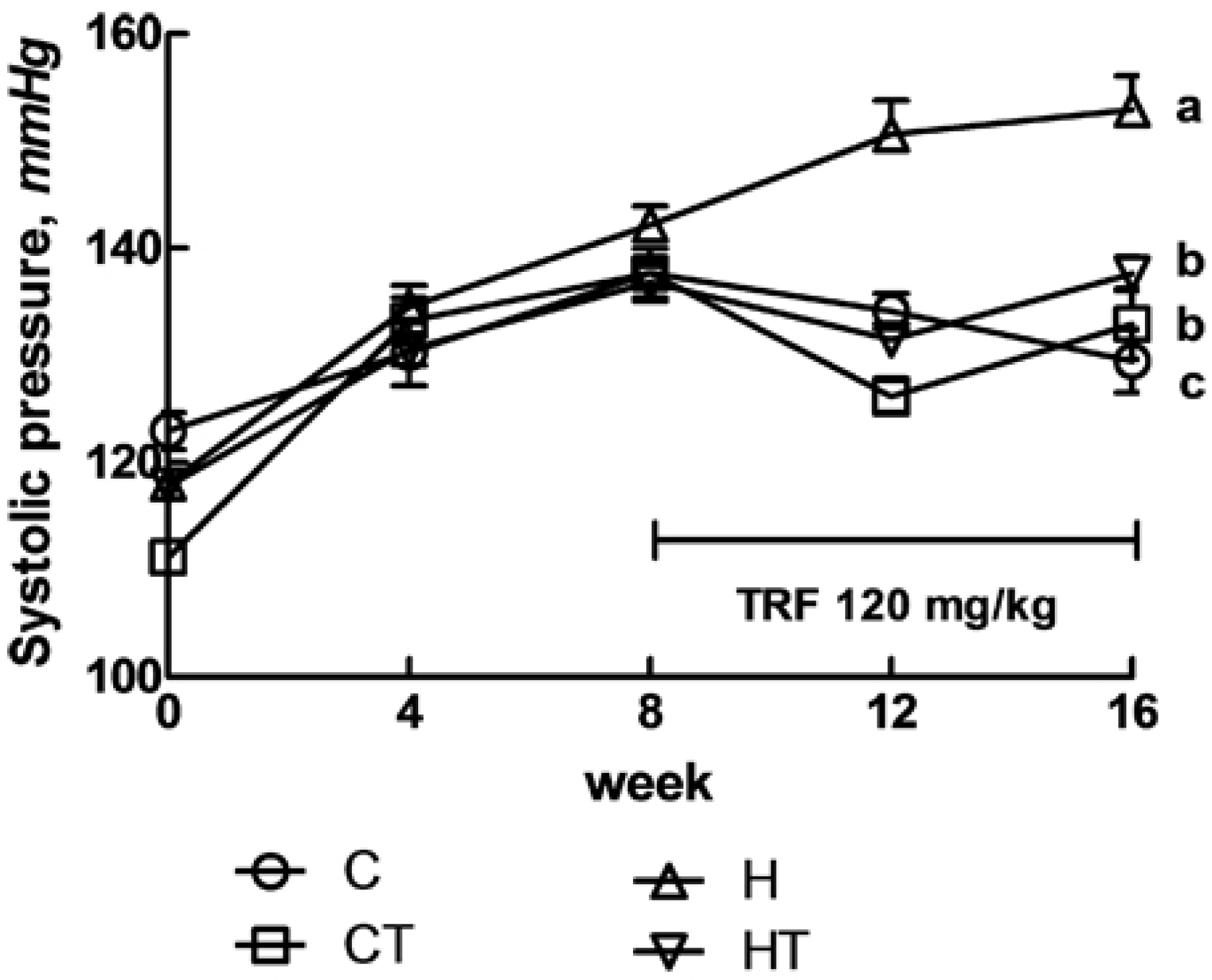 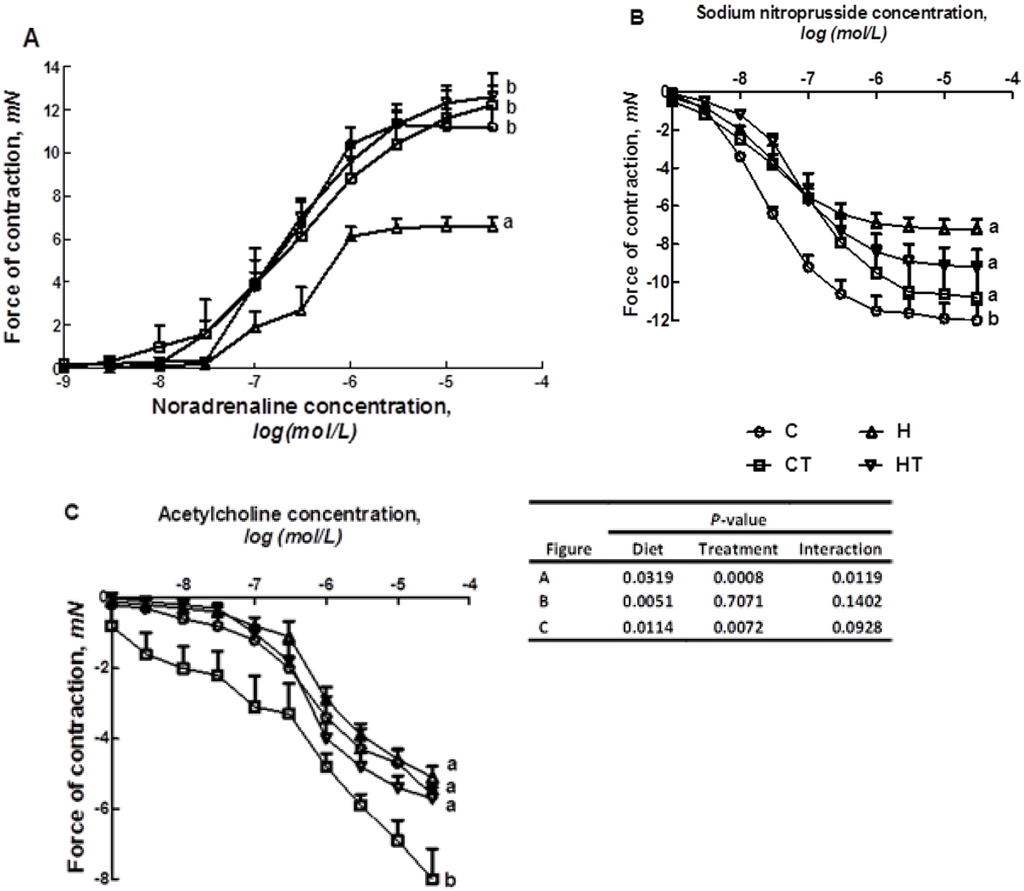 Table 1. Changes in cardiovascular structure and function in C, CT, H and HT diet-fed groups.
Each value is mean ± SEM. Groups with letters different from others are significantly different (p < 0.05, n = 8).

This study shows improved metabolic parameters, and cardiovascular and liver structure and function, with smaller changes in abdominal obesity, in rats on a high carbohydrate, high fat diet administered TRF, a mixture of α-tocopherol, α-tocotrienol, γ-tocotrienol and δ-tocotrienol. We have shown that this high carbohydrate, high fat diet induces pathophysiological changes that resemble human metabolic syndrome [13], a syndrome that includes abdominal obesity, hyperglycaemia, dyslipidaemia, hypertension and fatty liver. Further, the changes in these rats can be reversed by interventions with compounds derived from foods, such as purple carrot extract high in anthocyanins [14], rutin from onions [19] and quercetin from apples [20]. Tocotrienols as important nutrients in food have been reported to change the individual parameters in the metabolic syndrome, including improved lipid profiles, decreased blood glucose concentrations and lowered blood pressures [4]. Oral supplementation of α-tocotrienol increased concentrations in many organs with skin, adipose tissue, liver, brain, ovaries and the heart as preferred destinations [21,22]. Treatment of the metabolic syndrome with tocotrienols could then improve the different aspects of metabolic syndrome including obesity, insulin resistance and cardiovascular disease, as an alternative to treating each risk factor with a separate intervention with the increased risks of polypharmacy [23]. TRF is Generally Recognised as Safe (GRAS) with no indication of significant adverse effects related to tocotrienol consumption at the dose used in this study; further, TRF products are commercially available with trade names including Tocomin, Gold TriE and Carotino TRF [24].
Several mechanisms have been proposed for the tocotrienol-induced improvements shown in this study. The reduced blood pressure with tocotrienols in Spontaneously Hypertensive Rats may result from increased total antioxidant status and superoxide dismutase activity with reduced lipid peroxidation [25] and increased production of prostacyclin [26]. Possible mechanisms for the decreased ventricular fibrosis include scavenging oxygen species to alleviate inflammation, and down-regulation of TGF-β1 which induces fibrosis [27]. Increases in collagen deposition are linked to the excess production of advanced glycation end-products (AGE) [28] that increase collagen cross-linking and deposition, increasing myocardial stiffness. TRF decreased AGE in STZ-induced diabetic rats [29]. Tocotrienols improved metabolic parameters including glucose utilisation and insulin sensitivity [29,30,31]. This may lead to decreased plasma triglycerides and non-esterified fatty acids since insulin is a potent suppressor of circulating NEFA concentrations through suppression of hormone-sensitive lipase, up-regulation of lipoprotein lipase [32] and maintaining a constant rate of free fatty acid re-esterification apart from enhancing glucose uptake and glycolysis, switching energy production from dominant fat oxidation to prevalent carbohydrate utilisation [33]. Tocotrienols reduce cancer growth by inhibiting angiogenesis [11,12]; δ-tocotrienol induced apoptosis in endothelial cells through growth factor-dependent phosphatidylinositol-3 kinase/PDK/Akt signalling [12]. Similar responses in adipose tissue should decrease growth of fat pads [4]. Further, our results indicate improved liver structure and function following TRF treatment.
A key change that may improve cellular survival is the reduced infiltration of inflammatory cells in the heart and liver, as shown in this study. Inflammation may initiate both insulin resistance and vascular dysfunction [34]. TRF inhibited the release of inflammatory mediators such as interleukin-6 and nitric oxide from macrophages in vitro [10]. While we have not measured changes in proinflammatory cytokines or other plasma biomarkers in this study, previous studies suggest that TRF inhibits production and release of TNF-α, TGF-β1 and IL-1β in STZ-induced diabetic rats [35]. The histology suggests that the anti-inflammatory responses are important and future studies on TRF and the individual homologues should include measurement of relevant biomarkers in plasma and their expression in tissues [36]. Damaged cells may show an increase in phosphorylated c-Src associated with pro-death signalling in myocytes [37] while increased Akt phosphorylation is generally associated with cardiomyocyte survival [38,39]. In neurones, α-tocotrienol blocked glutamate-induced death by suppressing glutamate-induced early activation of c-Src kinase [40], so tocotrienols may enhance cardiomyocte survival by preventing c-Src activation and enhancing Akt phosphorylation.
TRF did not reduce visceral adiposity in this study, unlike other dietary interventions in this rat model [14,19,20,41]. In contrast, supplementation of rice bran tocotrienol mixture or α-tocopherol reduced body weight of F344 rats fed a high fat diet [42]. An in vitro study on 3T3-L1 cells suggested that α- and γ-tocotrienols reduced body fat by suppressing adipocyte differentiation and Akt phosphorylation [43]. Interpretation of the results is complicated by possible interactions between tocopherols and tocotrienols in TRF; as an example, tocopherol attenuated the cholesterol-lowering effect of γ-tocotrienol [44]. Tocopherols may decrease the responses to tocotrienols as the body prefers to absorb α-tocopherol rather than tocotrienols [5]. Further, preferential absorption has been reported for α-tocotrienol over γ-tocotrienol, δ-tocotrienol and α-tocopherol in thoracic duct-cannulated rats [45]. Differences in the number of methyl groups on the chromanol rings of the tocotrienols could affect the lipophilicity of the molecule and transportation to the lymphatic system via biological membranes [46]. In addition, interference by α-tocopherol has been recently reviewed [47]. α-Tocopherol may inhibit the uptake of α- and γ-tocotrienols to peripheral tissues such as heart, skin, aorta and perirenal adipose tissue, attributed to transport of tocotrienols and tocopherols to tissues by liver-dependent transport mechanisms [48].

TRF attenuated the structural and functional changes in the heart and liver associated with metabolic syndrome, and improved glucose metabolism and lipid profile. Prevention of inflammation may be the key mechanism. Although TRF showed minimal effects on obesity, studies with individual tocotrienols are warranted since the pure compounds may produce different responses to the mixture.