Searching for a Longevity Food, We Bump into Hericium erinaceus Primordium Rich in Ergothioneine: The “Longevity Vitamin” Improves Locomotor Performances during Aging

Phenotypic frailty is characterized by a progressive decline in physical functioning. During ageing, morphological and functional alterations involve the brain, and chief theories involve oxidative stress, free radical accumulation, and reduced antioxidant defenses as the most implicated mechanisms. From boosting the immune system to fighting senescence, medicinal mushrooms have been found to have a number of health and longevity benefits. Among them, Hericium erinaceus (He) has been demonstrated to display a variety of physiological effects, including anti-aging properties. Thus, He represents an attractive natural source for developing novel medicines and functional foods, based on the identification of its active ingredients and metabolites. Particularly, H. erinaceus primordium (He2) extract contains a high amount of Ergothioneine (ERGO), the longevity vitamin. Herein, we revealed the preventive effect of ERGO-rich He2 extract in a preclinical model, focusing on locomotor decline during ageing monitored through spontaneous behavioral test. This effect was accompanied by a significant decrease in some oxidative stress markers (NOS2, COX2) paralleled by an increase in P53, showed in cerebellar cortex cells and fibres by immunohistochemistry. In summary, we demonstrated the neuro-protective and preventive effects of He2 extract during aging, probably due to its peculiarly high ERGO content. View Full-Text
Keywords: frailty; medicinal mushroom supplementation; Hericium erinaceus; primordium; oxidative stress; frail prevention; neuroprotection frailty; medicinal mushroom supplementation; Hericium erinaceus; primordium; oxidative stress; frail prevention; neuroprotection
►▼ Show Figures 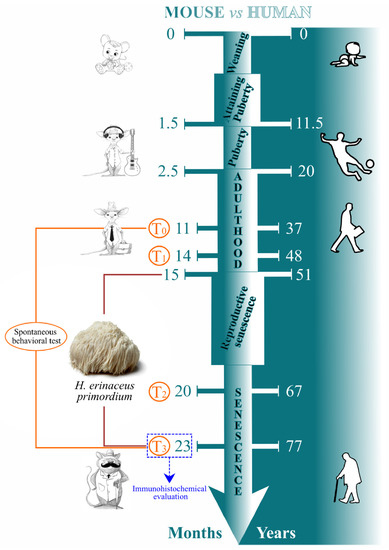