A meta-analysis has been widely applied to draw general conclusions using a set of studies with similar purposes and designs. This study aimed to perform a meta-analysis of six randomized placebo-controlled trials, independently conducted for the relationship between a plant-based multivitamin/mineral supplementation (PMS) and oxidative stress for 6 to 8 weeks, to provide overall estimates of those effects. In detail, linear mixed model analysis was first conducted on each study to obtain individual estimates; then, two types of meta-analysis were applied to combine the individual estimates from all available studies (overall meta-analysis) and region-specific studies (subgroup meta-analysis). In the meta-analysis, we selected 19 biomarker variables that overlapped in at least two studies and found 6 variables significant in at least one meta-analysis. The overall estimates of beta coefficients were 0.17 for vitamin C, 0.80 for vitamin B6, 0.46 for vitamin B12, 0.81 for folate, 0.36 for β-carotene, and −0.17 for oxidized LDL (ox-LDL). Subsequent association analysis revealed significant negative correlations between plasma free radical scavenging nutrients and plasma ox-LDL levels, indicating a general benefit of PMS in alleviating oxidative stress by providing exogenous oxidant scavengers. View Full-Text
Keywords: meta-analysis; multivitamin supplementation; exogenous oxidant scavenger; oxidative damage meta-analysis; multivitamin supplementation; exogenous oxidant scavenger; oxidative damage
►▼ Show Figures 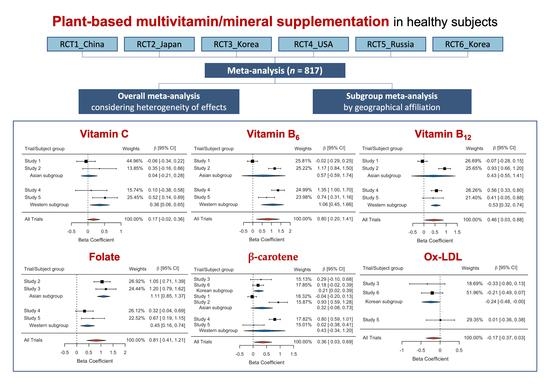